Trust me: when you go on a true American road trip, you will never be fully prepared for the journey. The variety of landscapes, weather phenomena, vegetation, and animals is a treasure chest for nature lovers. You’re driving your car on the long and winding roads, and it’s almost unbelievable how you can literally see the environment transform.

Technically speaking, it makes sense. The North American continent is the third largest continent in the world. So really, it’s no wonder that so many different types of ecosystems can be found in the United States alone. But our journey across the American West wasn’t a scientific experiment. Instead, it was a valuable travel experience that showed us the incredible diversity of this gorgeous corner of the world. 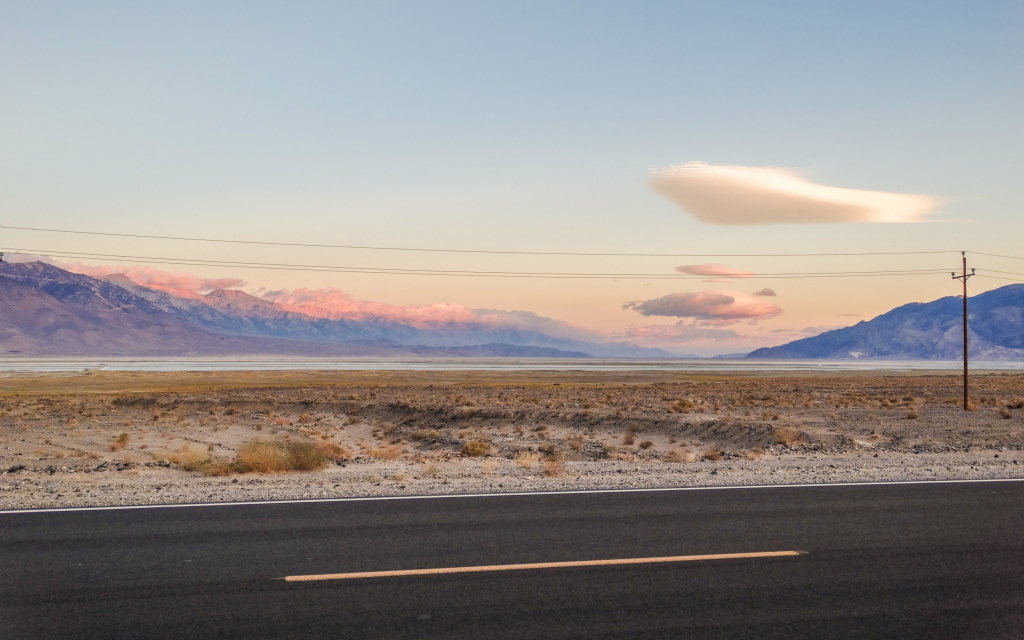 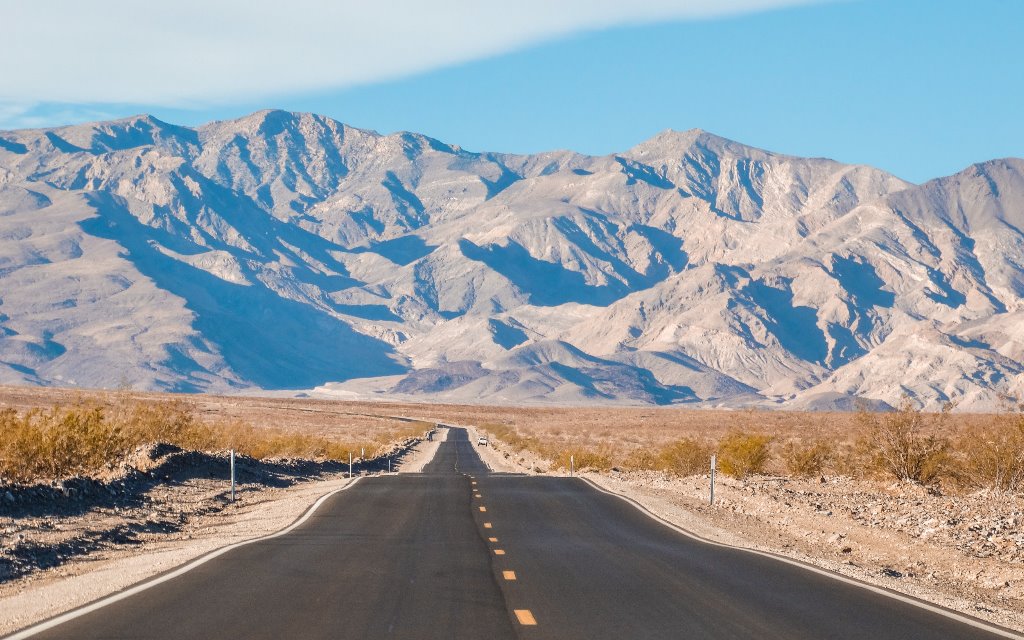 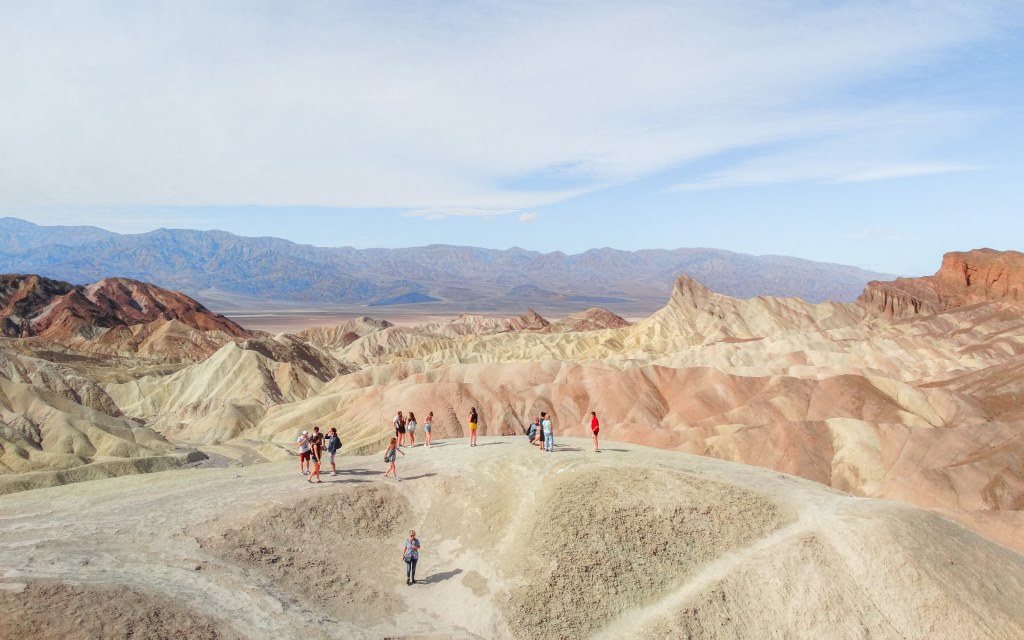 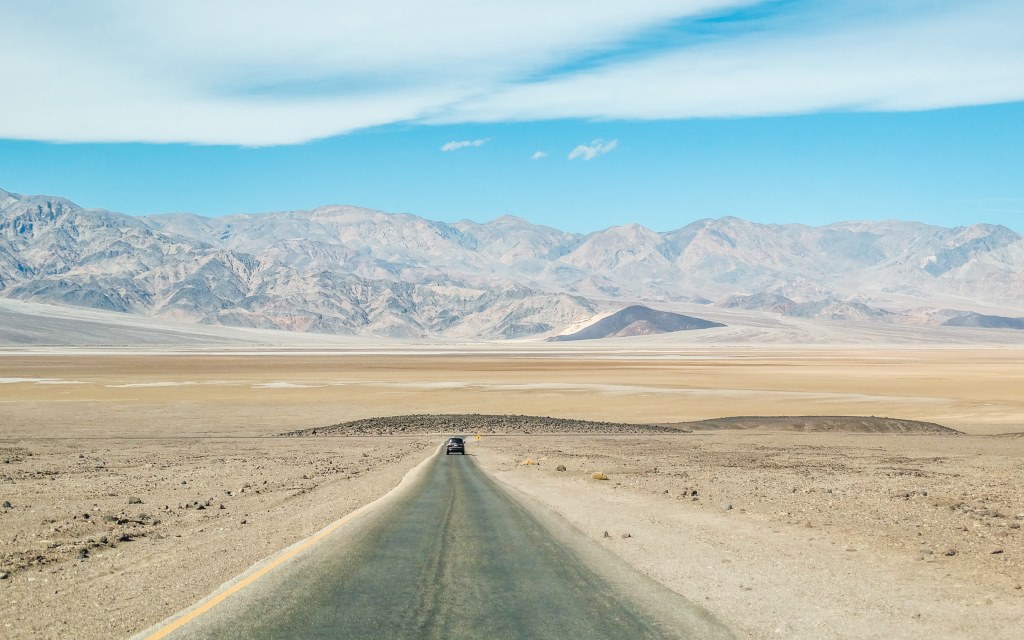 The sun was rising as a strong gush of wind was pushing the clouds across the horizon. We pulled over and stepped out of our car to take a photo of the mesmerizing hues of the morning light. From Olancha to Panamint Springs, the road to Death Valley was already a feast for the eyes. The rising temperatures and barren landscape told us that we were getting close to one of the hottest places on Earth.

We kept going and the multicolored dunes were swiftly replaced by Badwater Basin, filled with a thick crust of salt flats. In Death Valley alone, there must be dozens micro-climates.

After we entered the national park, the warm air climbed up to about 35 degrees Celcius, and we fired up our car’s air conditioner. We witnessed the dancing sand at the shifting Mesquite Flat Sand dunes and fully realized we were driving across a desert. Zabriskie Point took it one step further, and the multicolored dunes told an ancient story of wind, water and erosion. We kept going and the dunes were swiftly replaced by Badwater Basin, a valley filled with a thick crust of salt flats. In Death Valley alone, there must be at least a dozen micro-climates. 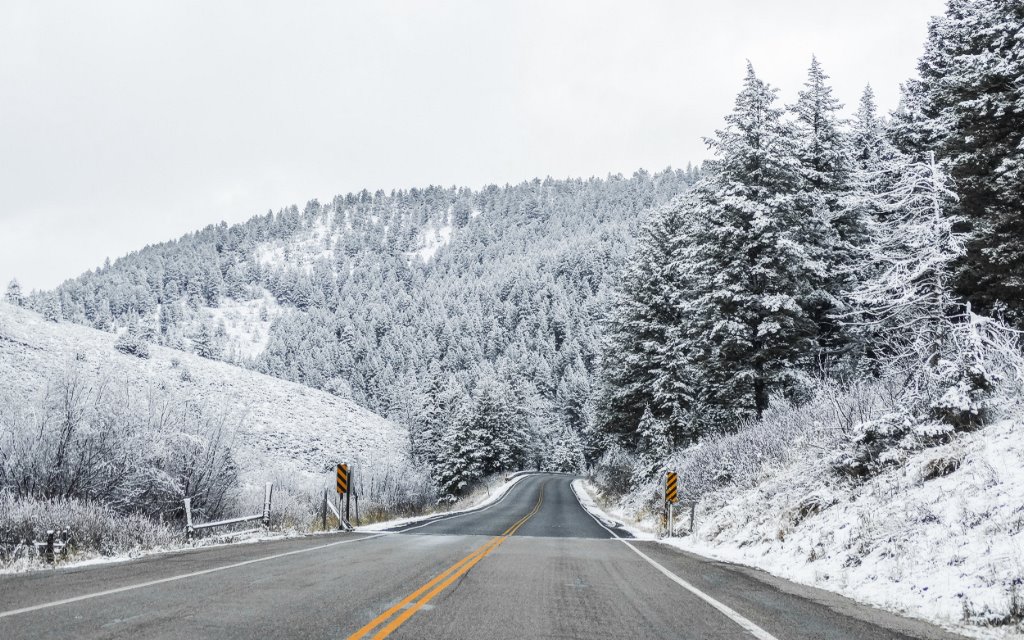 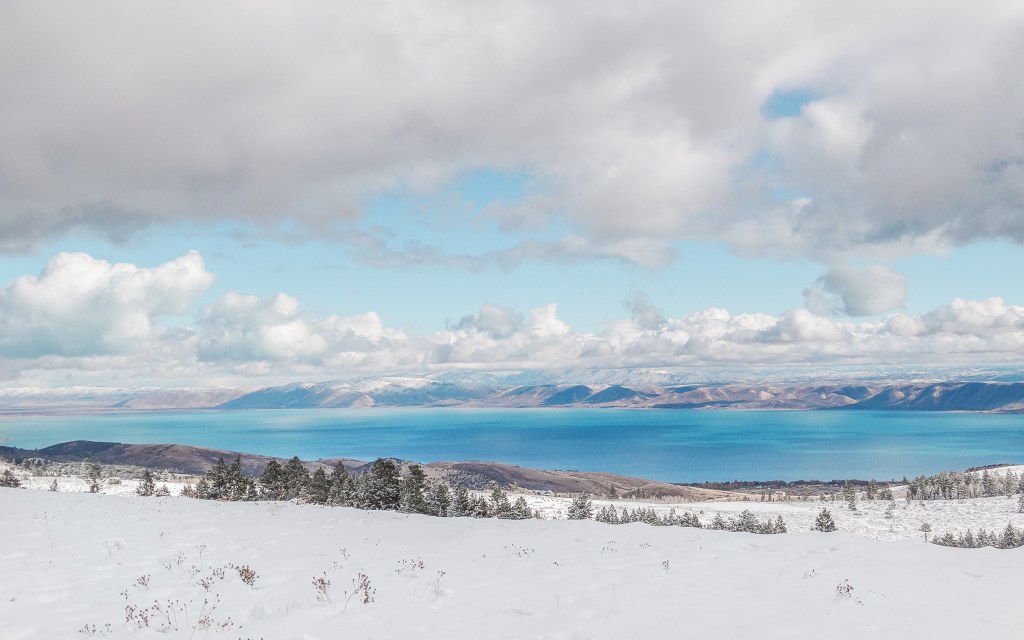 Just a day or two after we left Death Valley, the scorching heat already seemed like a distant dream. After leaving the desert, we followed the Scenic Byway 12 through Dixi National Forest and Bryce Canyon. Fall finally started to show through and, for a while, we enjoyed the golden hues of the changing leaves. However, the fall colors faded in a heartbeat and the landscape quickly changed again when we reached Bear Lake.

+  4 Weird Lessons I Learned While Travelling

The temperatures were dipping just below zero, and the weekend before, the very first snow of the season had fallen in Utah, Wyoming, and Idaho. Bear Lake, a natural freshwater lake, is split between the states of Utah and Idaho. The snowy landscape and icy blue water absorbed us into a winter wonderland, even though the fall season had only just begun. 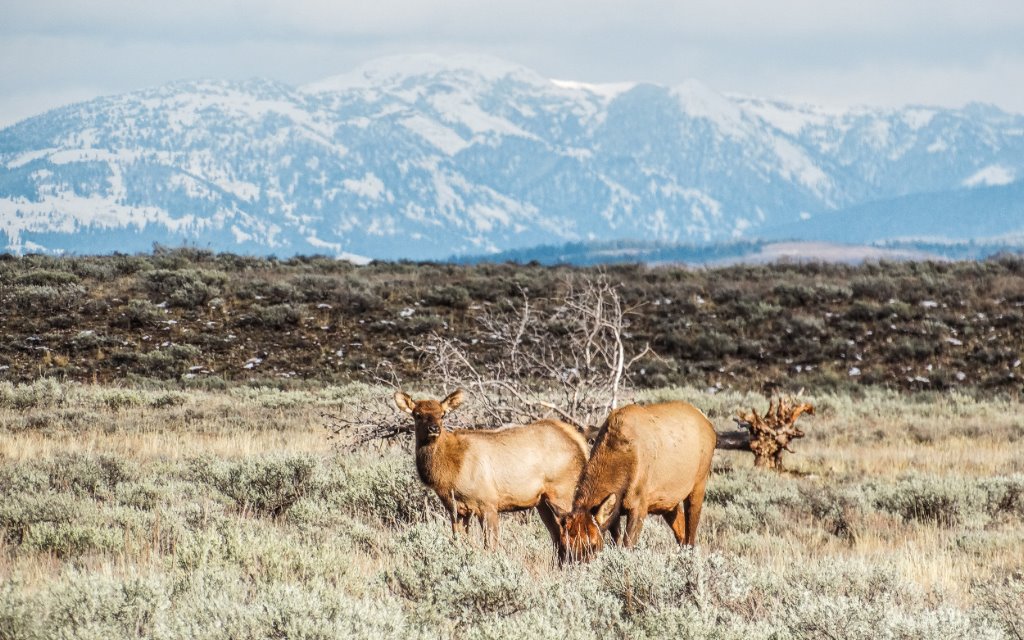 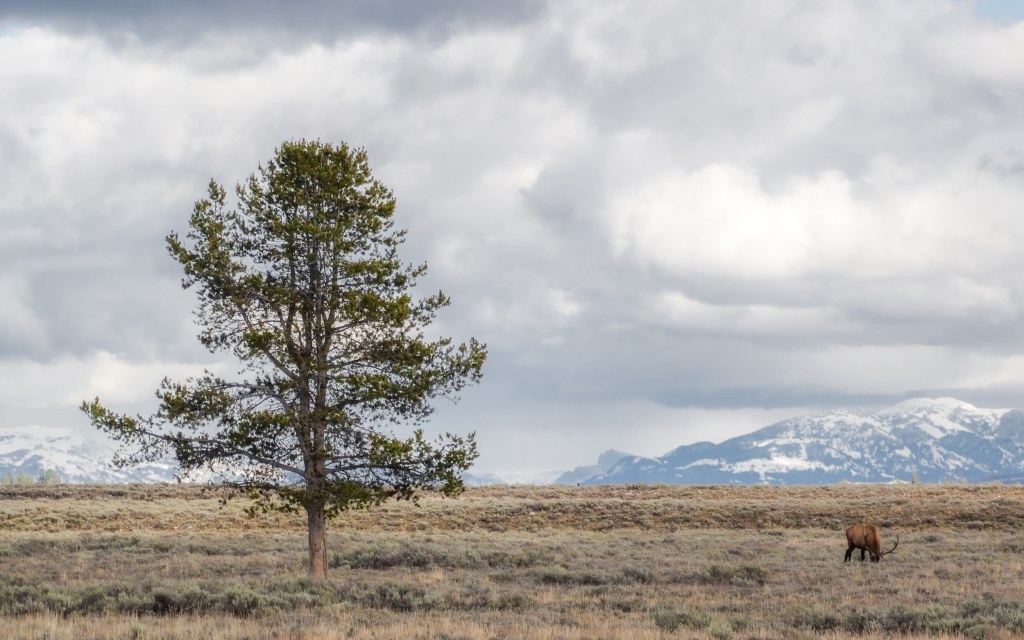 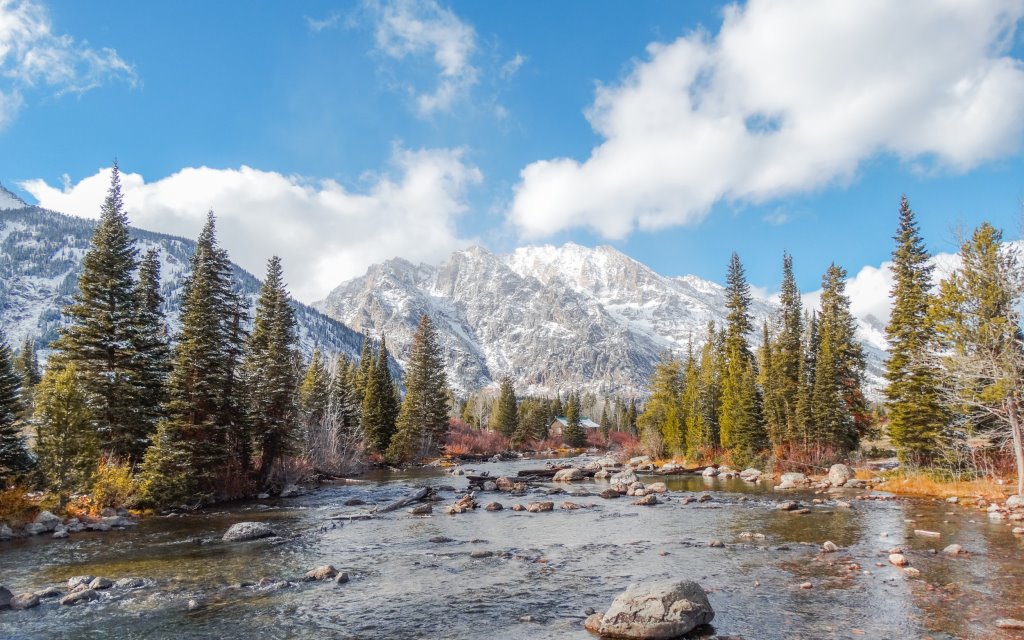 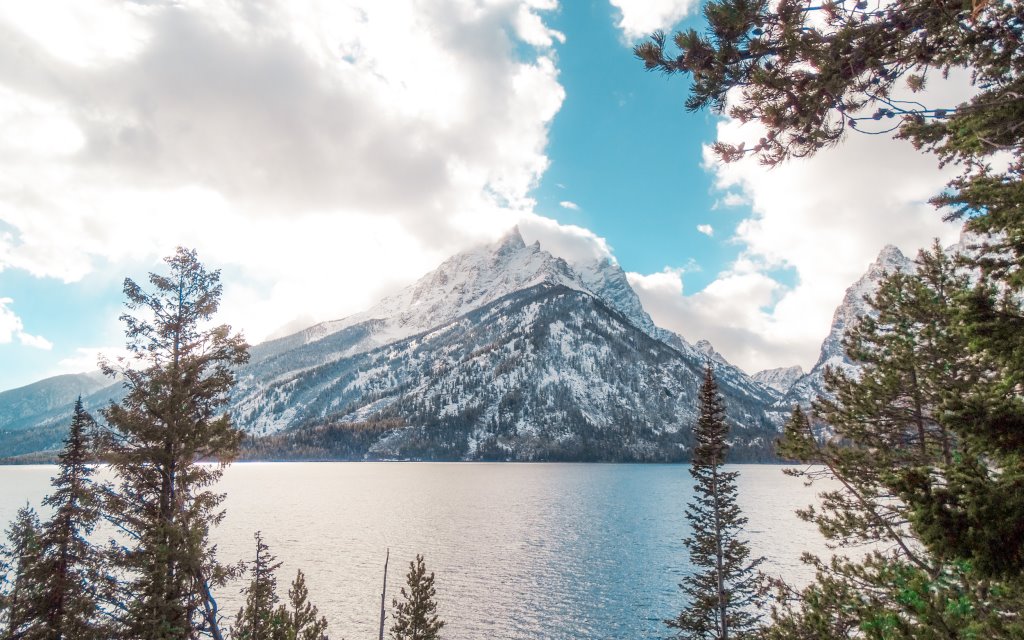 After our visit to Bear Lake, we drove on to the Grand Teton mountain range. As we continued on our way, the subtle layer of snow slowly disappeared. Still, the summits in the distance reminded us of the colder weather to come. Besides the rugged rivers, forests, and reflecting lakes, Grand Teton National Park is a safe haven for wild animals. The deer, elk, and bison were all around, grazing in the meadows aside the road. 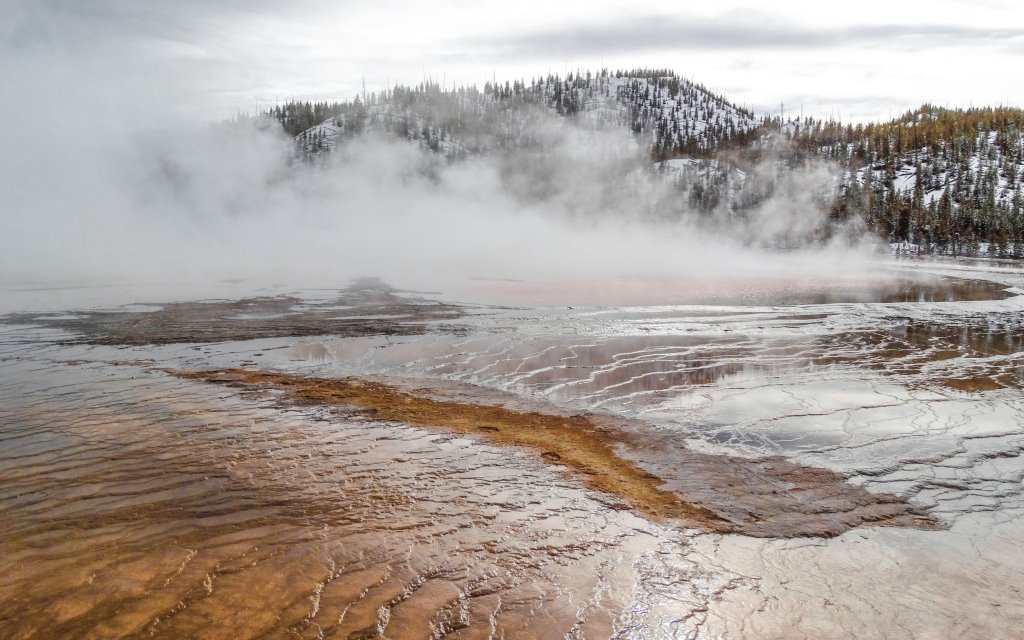 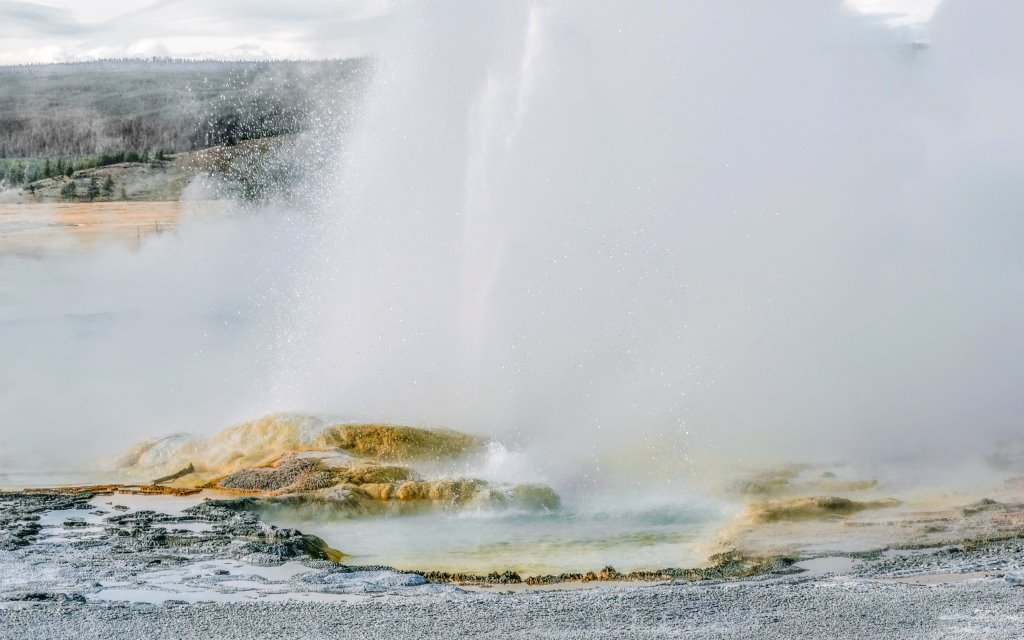 From Grand Teton National Park, the roads automatically flow into Yellowstone National Park. Again, the landscape went through spectacular changes. The further we drove into Yellowstone, the lower the temperatures dropped, and we soon returned to the snow. The icy weather made the roads pretty slippery, and we even felt a bit insecure without snow tires.

The bubbling water shot up in the air as we witnessed a tiny fragment of Earth’s primal inner power.

There were more pine trees, more lakes and more mountains, just like Grand Teton, but also many more geysers. The cold temperatures caused the geysers to produce extra clouds of steam, making everything a little blurrier than usual. The foggy atmosphere made Yellowstone look breathtaking in its own unique way. The bubbling water shot up in the air as we witnessed a tiny fragment of Earth’s primal inner power. 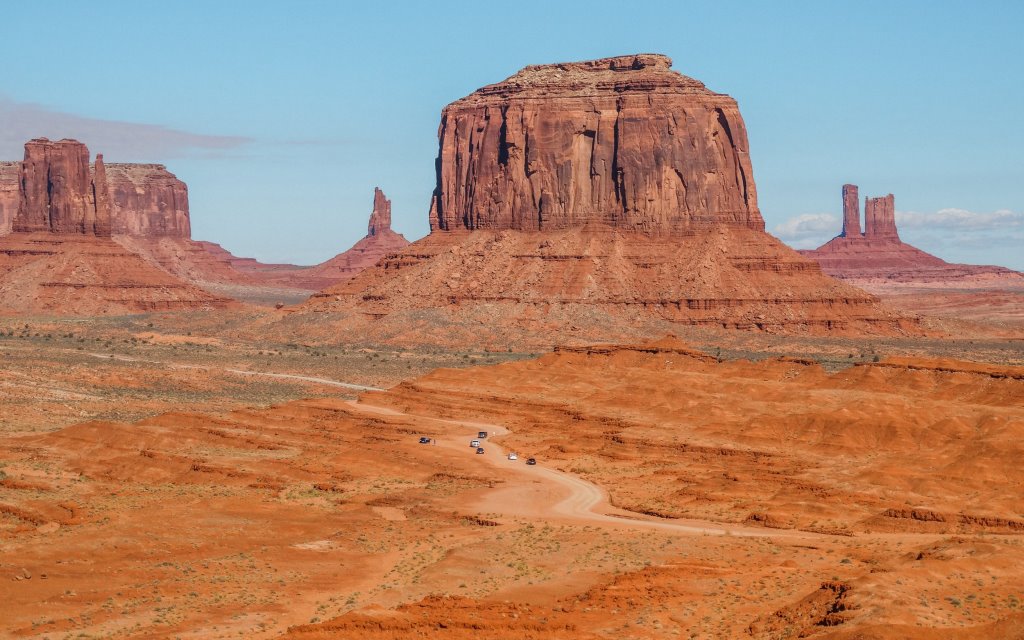 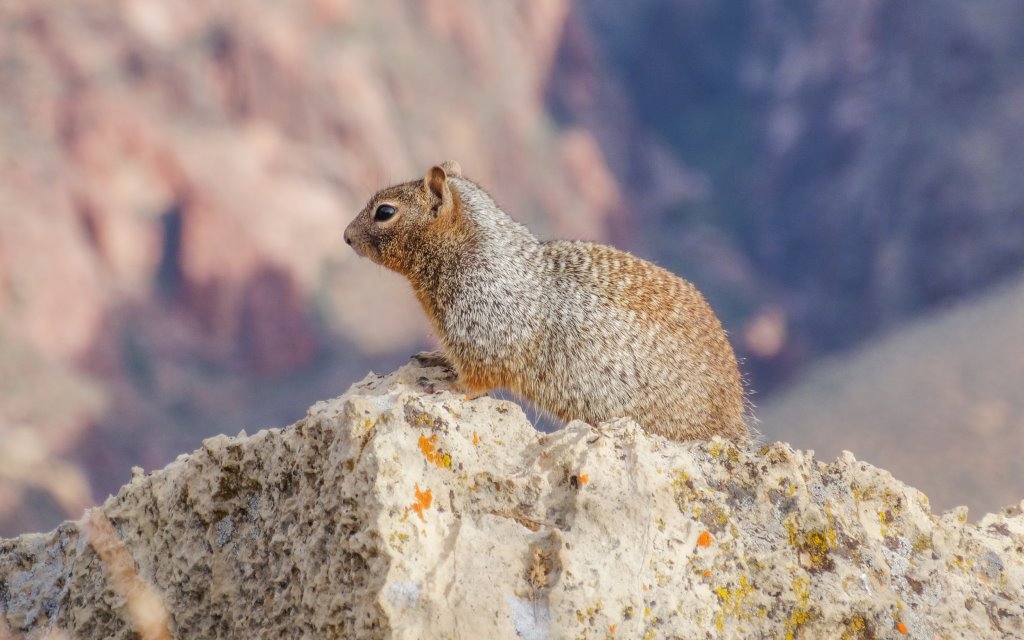 After Yellowstone, it was time to head south again, back to the warmer and dryer lands of Red Rock Country. Eventually, we arrived at the Colorado Plateau, a desert region known for its iconic red sandstone. There will be few people completely unfamiliar with this region, since it contains famed features like the Grand Canyon and Monumental Valley.

The Colorado Plateau covers an overwhelming 100 million acres, so the diversity in ecosystems is spellbinding. The area remains one of the wildest in North America, rich with deeply-carved canyons, alpine forests and sky-high peaks. The arid Monument Valley usually experiences soaring temperatures in summer, but it is not nearly as hot Death Valley, as you may have imagined. The high altitude lowers the average and it may even snow during a rare winter spell.

+  5 things not to miss in Washington DC 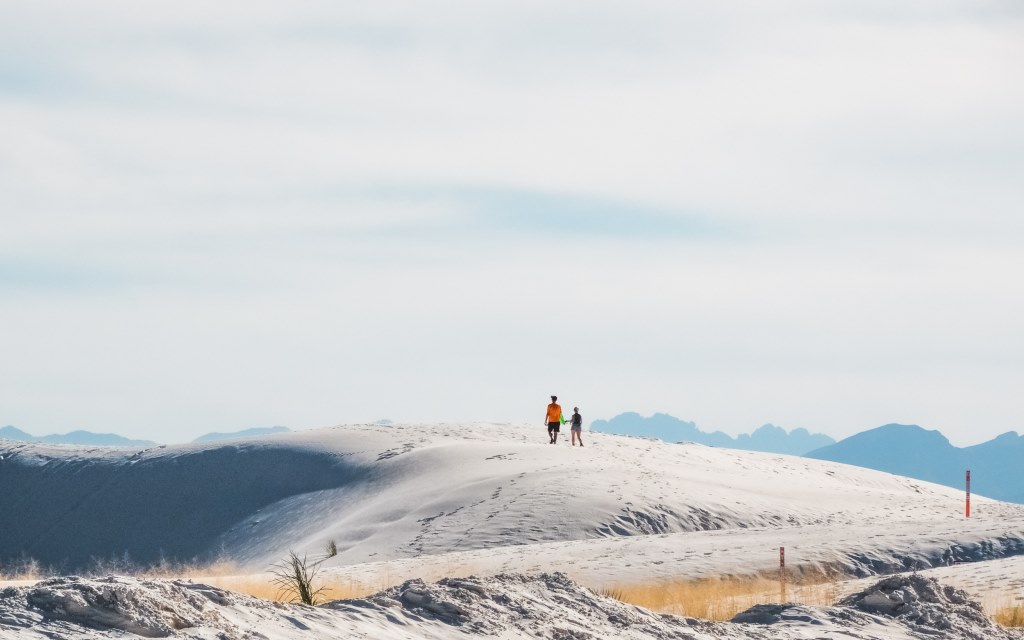 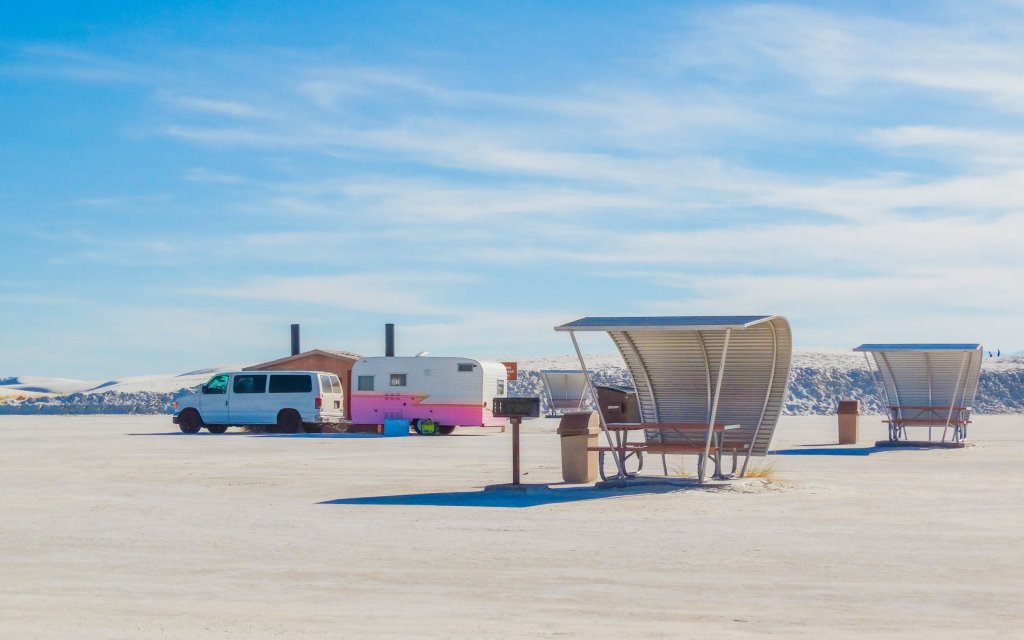 Continuing south, we found our way to the White Sands National Monument in New Mexico. The experience of driving through this otherworldly landscape simply confuses your mind. You look through your car window and the soft and white hills fool you into thinking you’re on your way to a ski resort. We even saw people sledding down the dunes, but all of them were wearing shorts and t-shirts instead of winter gear.

The gypsum sand crystals are geological time capsules from the ice age, from a lake that slowly dried up.

Then, we stopped the car and left the cool cocoon of air-conditioned air. It finally hit us: this really was a sandy plain full of gypsum crystals, definitely not snowflakes. The shifting dunes travel in the wind, sparkling in the sunlight as it moves from one place to another. The crystals are geological time capsules from the ice age, from a lake that slowly dried up. 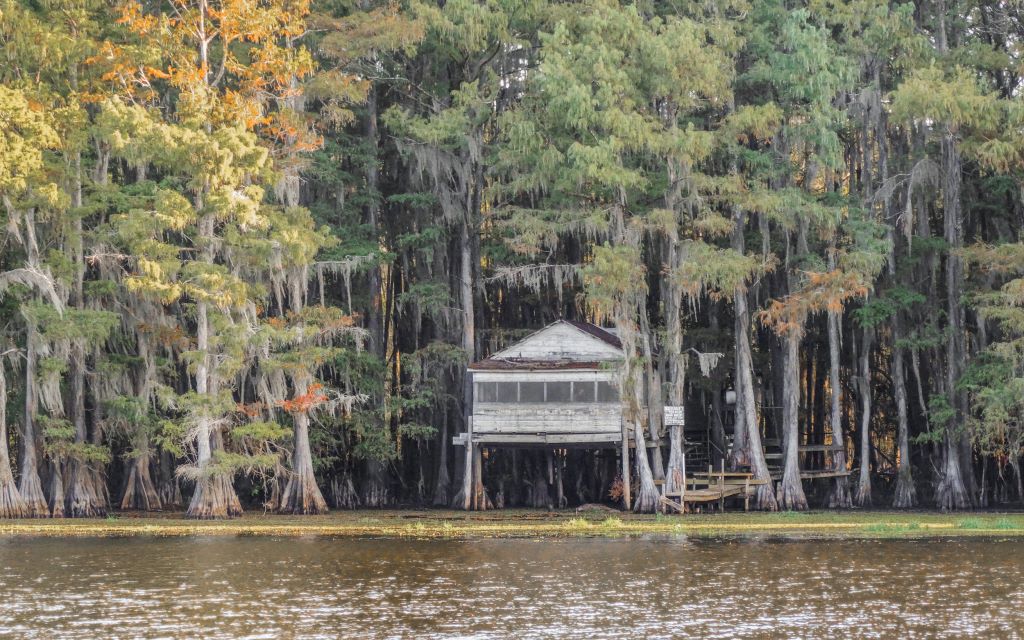 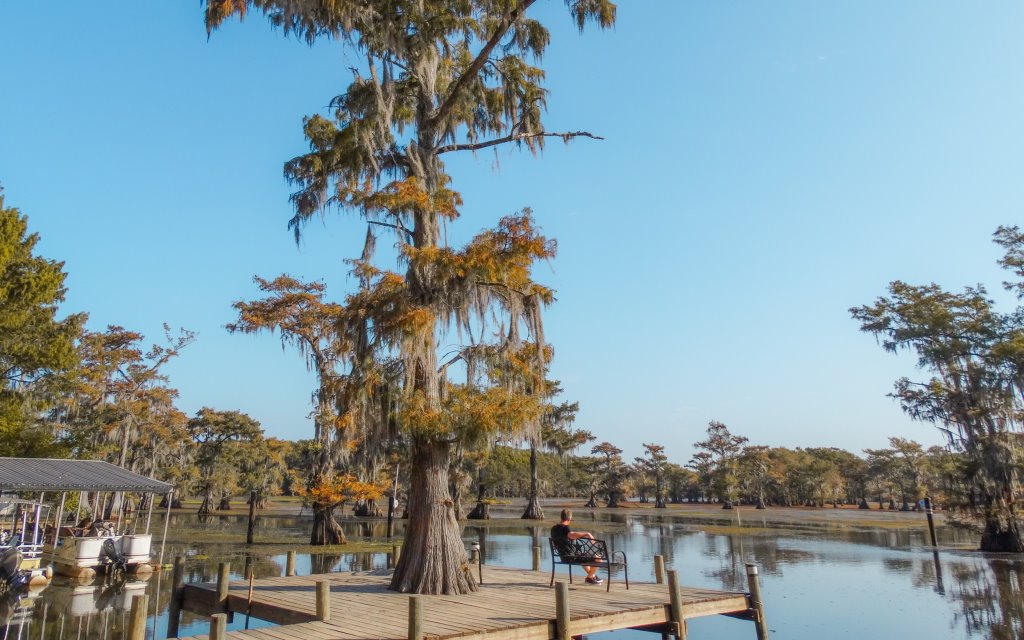 The end of our road trip was creeping closer, and we finally drove towards the Texas-Louisiana border. Yet again, the landscapes became unrecognizable from before. Slowly but surely, the sandy paths of the many deserts transformed into swampy lakes and waterways. The succulents and cacti made way for the tall cypress trees.

Caddo Lake, named after the native American Caddoans, is one of the largest flooded cypress forests in North America. When we arrived, the days were heading towards the end of October. The Spanish moss that dangled from the silent trees created a peaceful, yet hauntingly eerie atmosphere. Halloween was on its way, and we grew quiet as our eyes scanned the reflections in the lake.

Hi! My name is Marjon and I am a travel addict. As soon as I get back from a trip, I start planning my next one. I am interested in nature, culture and everyday life around the world. My favourite roadtrip destination is the USA. I am always on the look-out for quirky things to photograph and I’m excited to share my journeys with the Globonaut community!