Let’s be honest here, Amsterdam is hardly an undiscovered gem or underrated foodie destination in Europe. Hell, sometimes we really wouldn’t be mad if just a few more city trippers would hop on a plane to Brussels or Berlin instead (sorry neighbours). Whenever a millennial pink cafe or avocado-specialized restaurant gains a bit of social media traction, the lines quickly go around the corners.

But are all of these culinary mega hypes always worth the (sometimes slightly insane) waiting times? I’m sure we’ve all been there at least once in our lives: we see a massive line, so we assume we’ll be missing out on a super special experience if we don’t take the chance. What if we keep walking? We might be burdened by an eternal sense of FOMO every time we see a sprinkled stroopwafel on our Instagram feeds. UNACCEPTABLE! 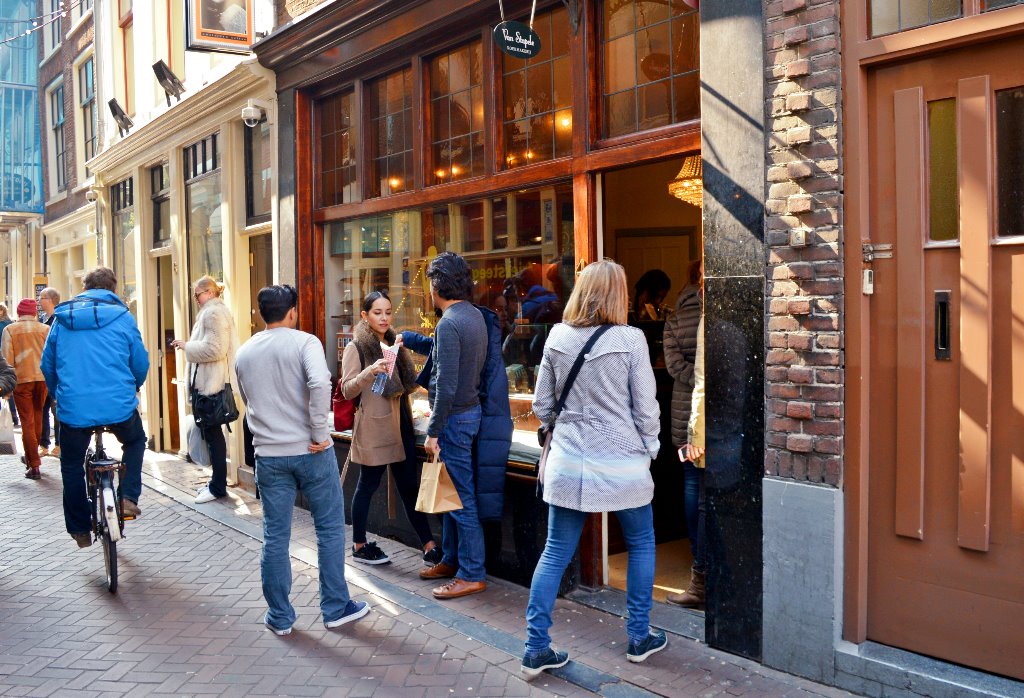 In all seriousness, we actually went out and did a real thing. We suffered the lines to report the truth to you, our faithful audience. You guessed it, we armed ourselves with some spectacular fanny packs, went undercover as starry-eyed tourists, and tested 8 different Amsterdam food hypes. OK, the fanny packs were a lie (never), but we really did go out and expose our digestive systems to an overdose of sugary monsters and avocado artworks. Here are our findings.

If we’re talking about food hypes and long lines, we pretty much have to start with Van Stapele Koekmakerij. This micro-sized cookie store has evidently found a golden formula and makes a single species of cookie. So, what did we think?

Katja: The Van Stapele cookies are totally worth the wait, even if the line of hungry people snakes all the way around the corner. This places makes only one type of cookie and they make it perfectly. Crunchy and chewy, the white and dark chocolate chip cookies are heaven when they come straight out of the oven and are still warm. I’m giving it a 5 out of 5.

Tip: Make sure you 100% self-identify as a hardcore chocolate lover (it’s going to be really chocolaty) and don’t plan your cookie party too late into the day. Depending on supply and demand (the cookies are sometimes even sold out), the shop may already be closed by 5 o’clock in the afternoon.

2. The Avocado Show: Everything Avocado (Duh)

Avocados are the new global food hype, or they have been for the last few years at least. Millennials certainly have the reputation of being obsessed with this creamy pitted fruit. So, when avocado-only restaurant The Avocado Show in Amsterdam opened to the public in 2017, the resulting long lines and social media hysteria did not come as a surprise. So, did The Avocado Show live up to the hype?

Millennials certainly have the reputation of being obsessed with this creamy pitted fruit.

Zahia: Well, the food was a bit pricey (no surprises there). It was also slightly ridiculous being in a restaurant where everyone took photos of their food and uploaded them before even tasting the dish. Still, everything was mouth-wateringly fresh and a delight to eat. If your avocado obsession is as strong as mine, then head to The Avocado Show for a tasty treat. It will definitely be worth it. Read my full report here.

Tip: Make sure you’re not in a hurry to have lunch. You will probably have to wait a little while until a seat opens up.

De Drie Graefjes (The Three Little Counts) is one of the most popular establishments in Amsterdam to enjoy a cup of coffee or tea and a nice slice of cake with an American touch. The original lunchroom opened its doors in 2000 and the owners added three new locations in the last few years. De Drie Graefjes show no signs of slowing down, and the hype doesn’t look like it will disappear anytime soon. But has the quality remained the same throughout the years?

+  Ottoman Harems and Psychic Snakes: 5 Facts about the Acropolis

Roselinde: I’m going to be brutally honest here; the ambiance isn’t consistently amazing at every location. Still, if you’re looking for top-notch cakes and pies, there is no doubt about where to go. The sinful strawberry swirl cheesecake is an experience on its own, and the portion-sizes have always been more than generous.

Tip: De Drie Graefjes at Rokin can get insanely busy, and they don’t accept reservations. Instead, head to the original lunchroom near the Dam. That one is always less crowded, and the staff is usually less stressed. 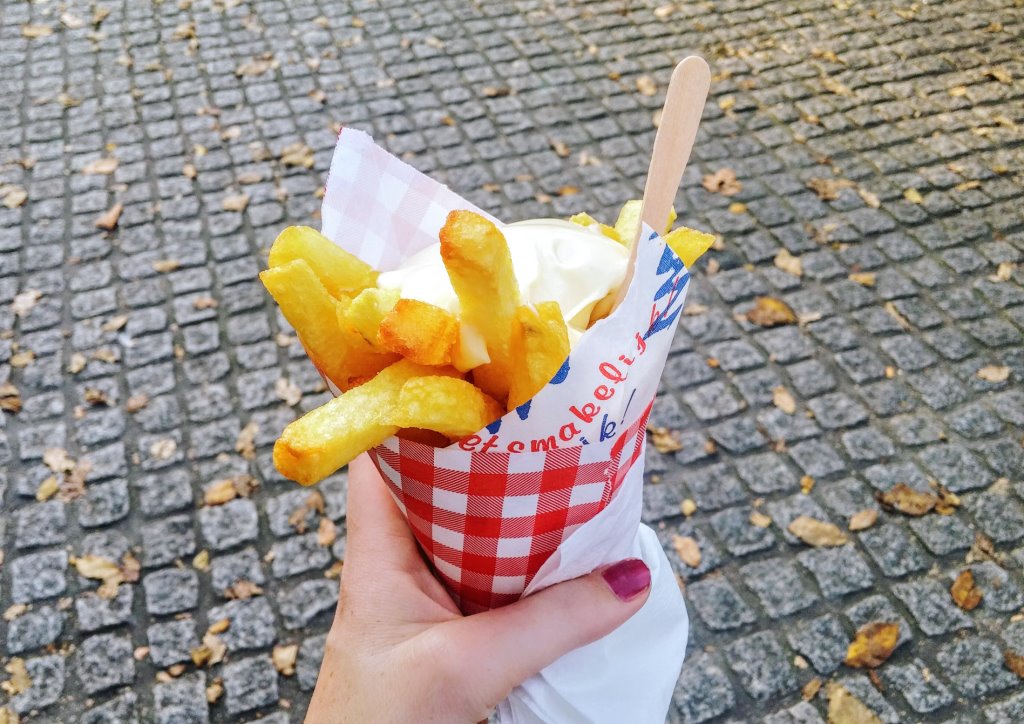 If any place in Amsterdam isn’t a well-kept secret, it’s Friteshuis Vleminckx. This friterie has kept it going for almost 60 years, so their fries have almost become culinary heritage for Amsterdammers. Locals and tourists alike will voluntarily pile up to get a hold of a few of those famous fries in a paper cone. Naturally, we had to give it a try ourselves.

Locals and tourists alike will voluntarily pile up to get a hold of a few of those famous fries in a quintessential paper cone.

Roselinde: First of all, it was simply very good. It was everything that classic Flemish fries should be. However, I think this was a case where my expectations were mounted so high, that I preemptively imagined an otherworldly foodie experience. As a result, the fries didn’t completely blow me away. Then again, the fact that the fried potato wizards at Vleminckx make 25 different types of sauces is already worth an award.

Tip: Don’t go for simple ketchup or other boring sauce-options, you’ll be selling yourself short. They call themselves the sauce masters, and I don’t think anybody has ever questioned that title.

Amsterdam isn’t always the best location for passionate gelato lovers, but there is one business that has been single-handedly saving the city’s ice cream scene since 2007. We’re talking about IJscuypje of course, local ice cream parlors that exclusively sell artisanally crafted flavours. Dairy-based scoops are made from milk from those typical cows you see in the Dutch countryside.

Roselinde: As a serious ice cream aficionado, IJscuypje certainly did not disappoint. After sampling over 10 different flavours (no, not all at once), I can confirm that their yoghurt flavours have become a genre of their own. Their fruity sorbet flavours are the best summer snack you can get, and most of their experimental flavours turn out to be a success. One tiny point of criticism: the size of your scoop can be very dependent on whoever came to work that day, but most of the time, you’ll get a reasonable amount.

Tip: IJscuypjes are spread all around central Amsterdam, but be aware that they are all closed during the winter months. They usually re-open their doors just before the spring season kicks off. 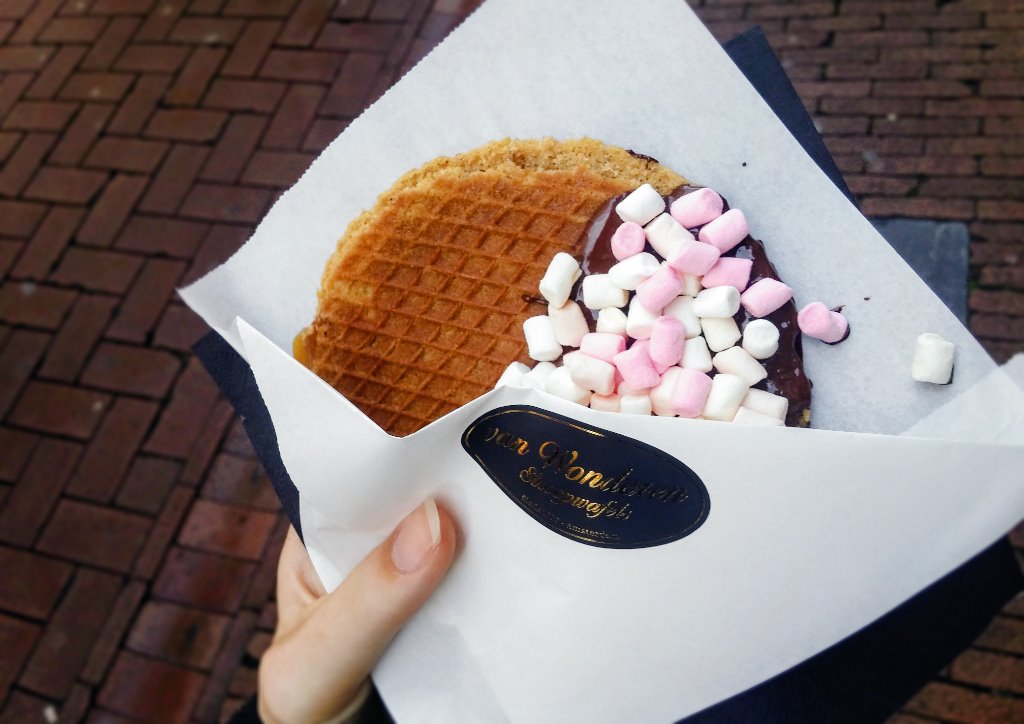 Van Wonderen Stroopwafels have recently revolutionized stroopwafels, the traditional Dutch caramel waffles. They’ve opened a little bakery in the heart of town and their multicolored toppings have become an instant success (the foordporn hashtag on Instagram is forever changed). Yet, we all know that we shouldn’t judge a book by its cover. Does this stroopwafel 2.0 live up to the hype?

Roselinde: Does it look like the prettiest thing ever? Yes, I would go as far as calling it the definition of Instagram-worthy. Do those marshmallows and sprinkles actually make the stroopwafel taste better? Unfortunately, not really. The toppings don’t make it taste any worse either, but a stroopwafel doesn’t really need all that extra jazz. They distract from the already perfectly-balanced flavour of their plain stroopwafels.

+  Tenerife: This is Where they Test Space Robots

Tip: Don’t hesitate about giving those multicolored circus stroopwafels a try (for the Insta), but get a plain one for your actual taste buds. 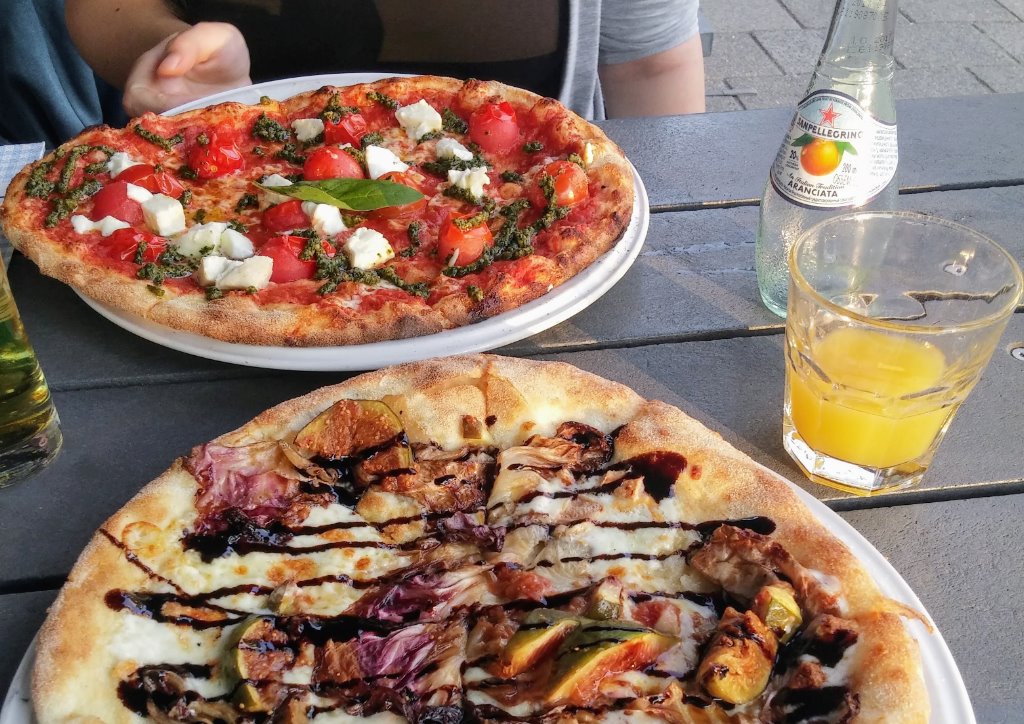 De Pizzabakkers restaurants have multiple locations in Amsterdam, and virtually every local will have heard of their name. Their affordable prices have made them a favourite among the student population, which has majorly helped the hype. The pizzas are baked in authentic wood-fired ovens, their sausages and hams are imported from Italy, and the secret ingredient in their crispy crusts is…patience. Will it live up to expectations, or is it hopelessly overrated?

Their sausages and hams are imported from Italy, and the secret ingredient in their crispy crusts is…patience.

Roselinde: De Pizzabakkers is one of those places where you can’t really go wrong. The price to quality ratio is perfect, and the ambiance in the restaurants is always the right amount of cosy. Their monthly experimental pizzas can be a bit of a hit or miss, but you have to give them credit for staying creative and thinking outside of the box. Worth the hype? You betcha.

Tip: The tables at the Pizzabakkers restaurants can fill up very quickly (especially in summer), so you might want to call in and make a reservation 1-2 days before you plan to visit. De Pizzabakkers only accept cards, so you can’t pay cash. 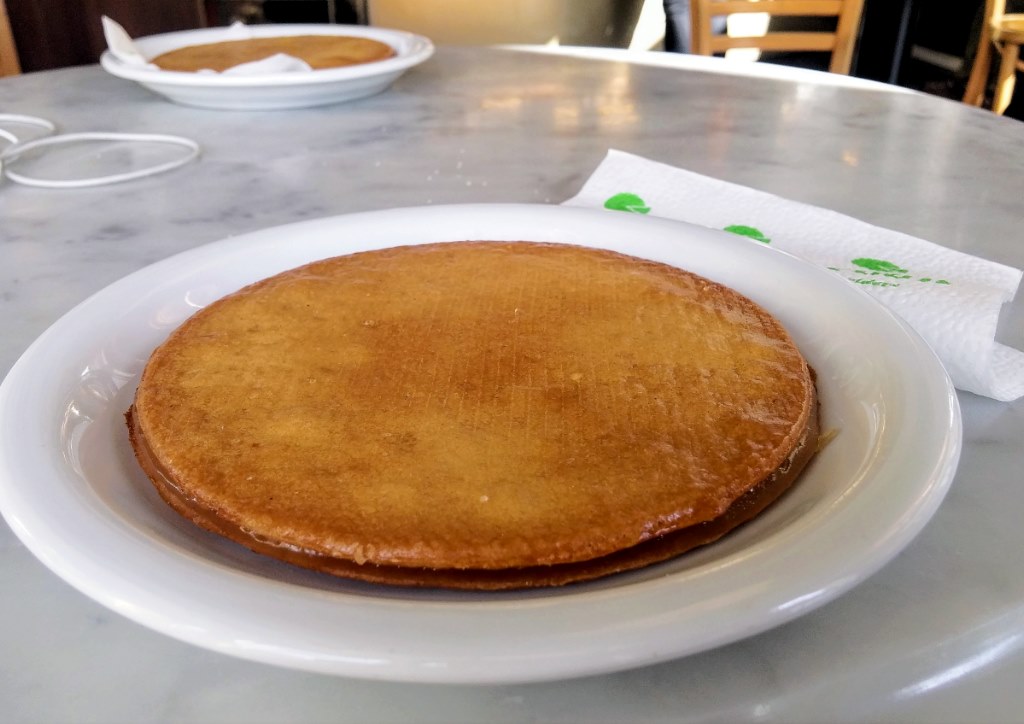 Last, but not least: we took a bite of the kingsize stroopwafels at Lanskroon Banketbakkerij. The Lanskroon confectionery is over 100 years old, and their home-grown recipes are held in high esteem. Their cakes are at expert level, but most of the hype is based on their kingsize stroopwafels. Lanskroon sells them in two unique flavours: honey or coffee caramel. These gooey giants have featured in several international newspapers and travel magazines, so we just had to put them to test.

Roselinde: We went with the honey-flavoured one, and the taste took me by surprise. I was expecting a stroopwafel, but it tastes so different that I almost feel like it should have its own household name. It tasted much creamier and more buttery than a traditional stroopwafel. That doesn’t necessarily mean it’s better than a stroopwafel, but it’s essentially a completely unique foodie experience.

Tip: Make sure you bring a friend or family member along when you want to try a kingsize stroopwafel. The waffles are so big that you’re risking a huge sugar coma if you’re going to eat it all by yourself (we’re speaking from experience).

Let us know: are you hyped?

That’s it from us! We’re curious to know if any of you have ever tried some of these Amsterdam food hypes. If yes, do you agree with our scores? Let us know in the comments below, and don’t hesitate to tell us which hypes we may have missed in this list.

This article was written by Roselinde, Zahia, and Katja.