Try to imagine a quiet country road, somewhere in the typically flat countryside of Zeeland, the Netherlands. As far as you can see, there is no other traffic around except for just you and your bike. You’re cycling along the fruit yards and green meadows, speckled with horses and lined by tall hedges. The country road crosses an old train rail. The rail is overgrown with grass and clearly not in use anymore. There are no boom gates, only a mossy sign that tells you about the crossing. Then, you suddenly hear the loud sound of what seems to be a flute kettle. There it is: out of nowhere, an old-fashioned black steam locomotive passes by very slowly, with a beautiful old train trailing behind it.

Locomotives from the old coal mines in Limburg

Ever since the 1970’s, this old steam train rides around Zeeland during the summer holidays. It’s definitely a real one, complete with steel rods going up and down. It slowly accelerates, sputtering sounds of the steam engine that ends in the familiar whistling sound. It’s a big, heavy locomotive with black chimneys from which large clouds of smoke arise. The old locomotives on the train route are originally from Limburg, an area in the south-east of the Netherlands. This is where they were used to transport coal from the old coal mines. One of the locomotives originally came from the US army, after which it began a second life in the coal mines of Limburg. Now, it’s living a third life on this little track between the city of Goes and the little villages Kwadendamme and Hoedekenskerke.

One of the locomotives originally came from the US army, but began its second life in the coal mines of Limburg. Now, it’s enjoying a third round in Zeeland.

Back in time with a historic day trip in Zeeland

A ticket for the old train costs somewhere between 6 and 16 euros, depending on which places you pick as your departure and arrival stations. The ticket allows you to travel in all trains on the track for the rest of the day. On some days, there will only be a running steam train, while on other days, the steam train is alternated by a motor wagon, which runs on diesel fuel. We buy a ticket for 8 euros with the cute Kwadendamme station as our starting point, a small village with only 900 inhabitants.

The train ride is a true joy. The abandoned station looks like no-one ever visits the place. Then, suddenly, an old-fashioned train arrives to pick up passengers. The passengers are checked by a conductor that gives us a handwritten receipt as a ticket. The coal filler is leaning out of one of the locomotive’s windows, exposing his sooty hands and a snow-white shirt full of dirty sweeps.

The passengers are checked by a conductor that gives us a handwritten receipt as a ticket.

Train interiors from the olden days

The interior of the train has wooden benches with beautiful workmanship. The walls have enamel signs, saying ‘no smoking’ or ‘do not open before the train stops.’ There are windows with squeaking sounds that can be opened  by pulling the metal handle down. The rope-knotted luggage racks hold decorative leather suitcases. When we near our terminal station, the conductor even comes to warn us about our arrival. It’s a real adventure.

+  How wheelchair-friendly is Amsterdam? An Interview with Josephine from Able Amsterdam 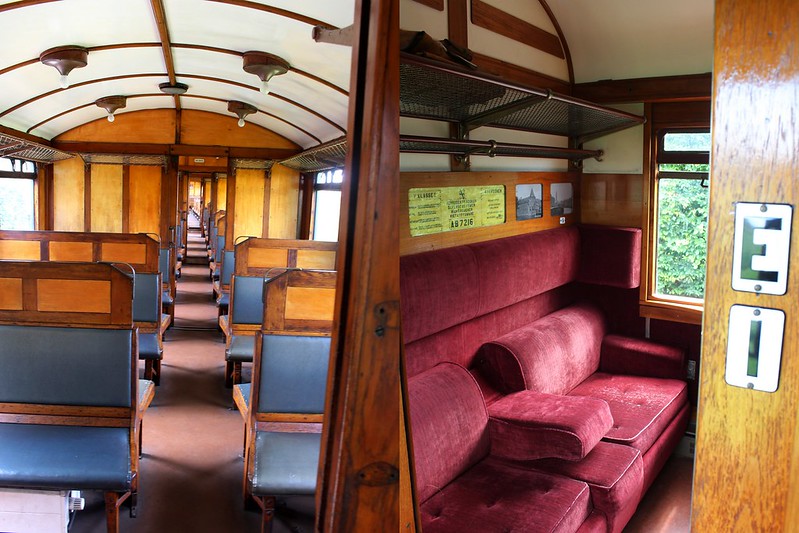 The heavy steam locomotive slowly accelerates and doesn’t run faster than 30 km per hour. This gives us enough time to gaze out of the window and take photos of the beautiful landscape and interior. Most of all, it allows us to thoroughly enjoy the short ride of only 20 minutes.

Spotting Old Trains at the Range Depot in Goes

All the trains start their route at the range depot area in Goes, just around the corner of the regular trainstation. It’s a fairly big area where several train wagons and locomotives are parked. Every wagon is rustier than the other, all of them in different shapes and colors. In order to get from the trainstation to the range depot area, you will need to walk around a beautiful old goods shed. This shed was originally from Middelburg, another city in Zeeland about 30 km away from Goes. It was eventually transported to Goes after it was sawed it into pieces. Nowadays, it’s a lovely café and restaurant, decorated in neoclassical style. This is also the place to buy tickets for the train. Here, you will have a beautiful view over the range depot area from the balcony terrace of the café. 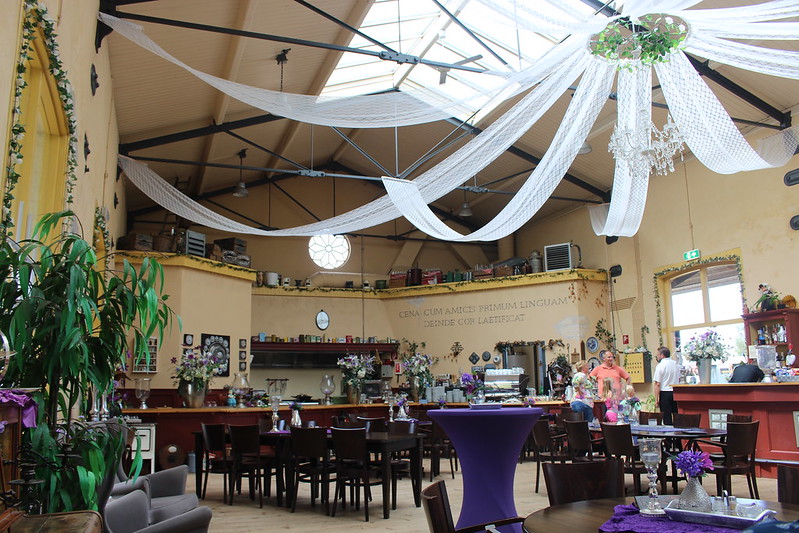 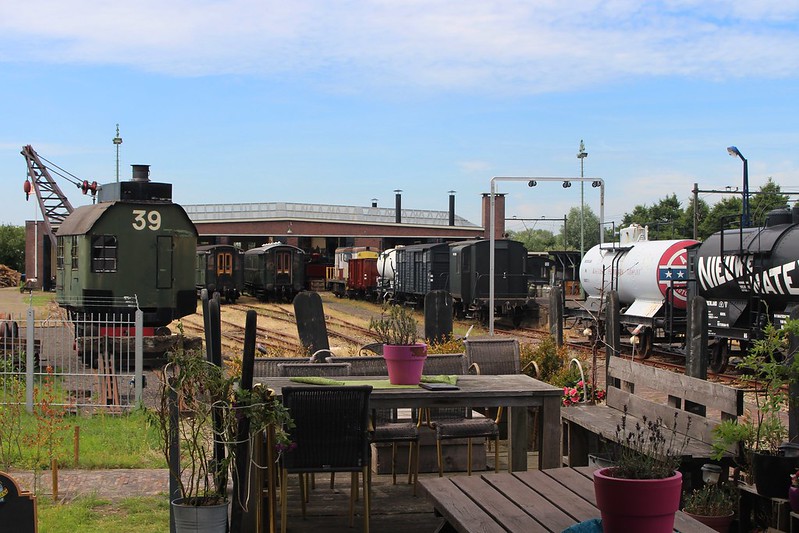 Fortunately, you can actually visit the range depot area for free, so you can look at all the material in more detail. Imagine old wheels, rusty barrels, and an old wagon full of beautiful objects from that era. You should also step inside the big engine house, where devoted volunteers work on the trains. The retired volunteers work as hard than ever before to restore the old wagons and locomotives in their original style. In the summer heat, you will find other volunteers on a very big pile with black coals, working their asses off to fill a steam locomotive.

While we walk around and take pictures, one of the volunteers stops us and starts a conversation. He turns out to be one of the ‘veteran’ volunteers of this project, dressed in a dirty, blue overall. After his retirement, he first worked as a engine driver and coal filler. He liked it very much but, but the long days of hard working became a little to much for his aging body. Now, he helps with the restoration of material in the engine house. Full of enthusiasm, he explained where the trains were from originally, what was happening in the area and how everything was organized.

A stunning 150 volunteers are involved in this project, driving the trains, selling tickets, filling coal and to restoring old material. To make sure all the work and volunteers are organized well, one paid employee is responsible for all the organization. In his free time, however, this veteran employee also drives and fills the steam train voluntarily. 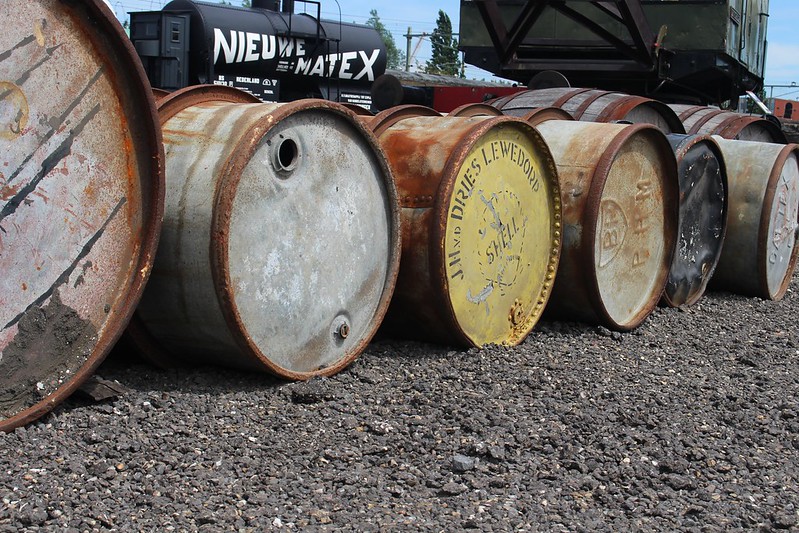 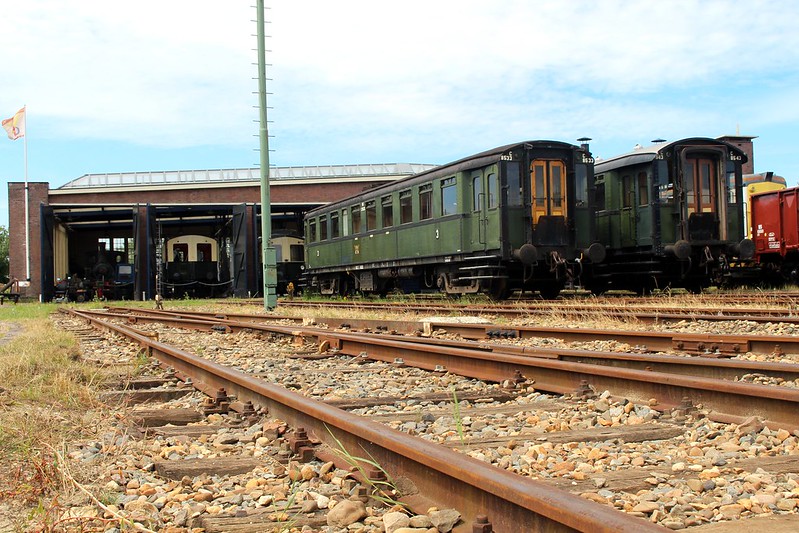 The man in the blue, dirty overalls is actually a steam train ‘veteran.’ He used to work as an engine driver and coal filler, but the work has gotten too intense for his aging body.

On our way back to Kwadendamme, another train is waiting for us. This time, it’s the motor wagon, an old train from Austria. It was made in 1960 and almost drives like a car with a coupling and manual gearbox. It’s a totally different-looking train, very open and transparent. Taking the seats at the front of the train, we enjoy our amazing view on the track. We can also see the engine driver, who skillfully manages the old mechanic control panel. With a slow speed of again 30 km per hour, the train slowly takes us back to our campsite. 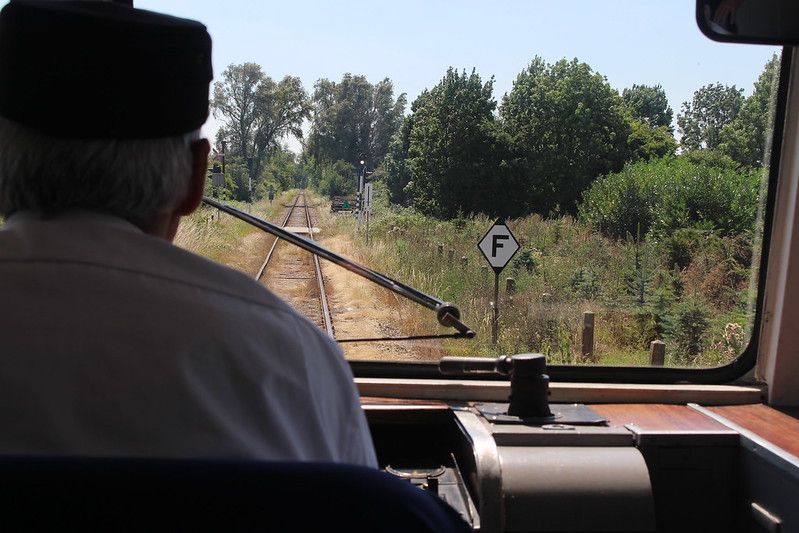