I think we can all agree that October is the best month for anything spooky. What better opportunity to discuss some of the most mysterious ghost stories from cities around the world? I decided to research six different places that I have recently visited and uncovered several unexpected tales. Most of these touristy locations would normally never be associated with death and murder.

Now, I probably don’t need to tell you, but remember to take these stories with a grain of salt. All of these accounts are urban myths, but I find them fascinating nonetheless. I hope you will too. 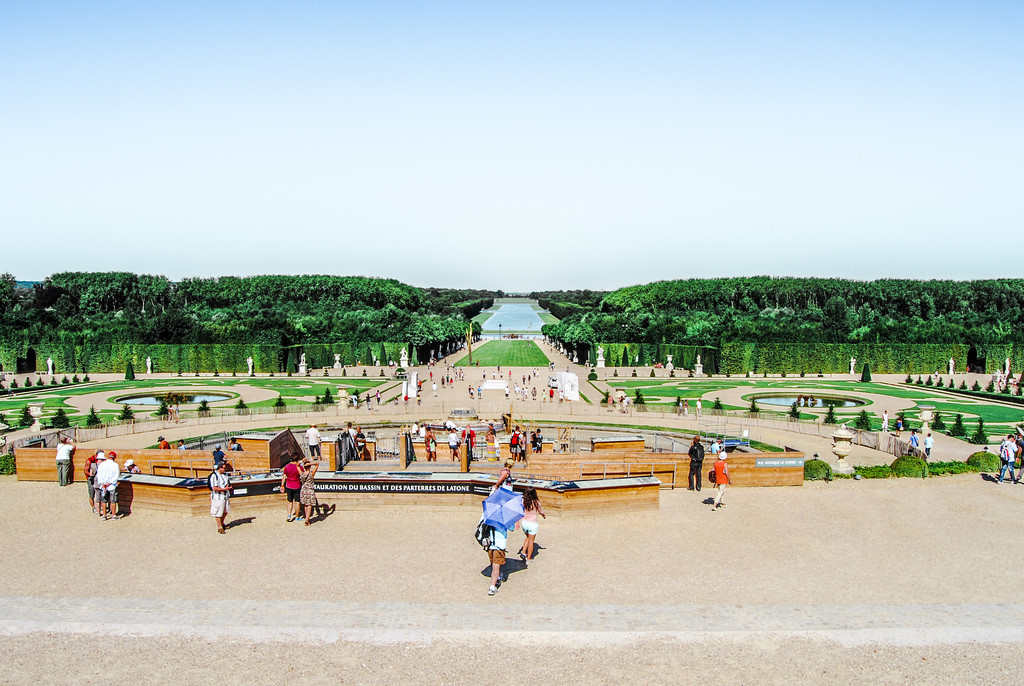 1. The Palace of Versailles: The Moberly–Jourdain Incident and the Ghost of Marie Antoinette

The first ghost story takes us to France, to the infamous Palace of Versailles. We have to go all the way back to 1911 to get to the bottom of this tale. Two women called Charlotte Moberly and Eleanor Jourdain published a book about their visit to the Palace of Versailles. They claimed that they had seen multiple ghosts on the Palace grounds, including Marie Antoinette. Their story quickly became a true sensation.

After crossing a bridge, the women reached the Triaton gardens, where they saw a lady sketching a drawing.

According to the two women, they lost their way and got caught up in a time slip, allowing them to see ghosts of the past. After crossing a bridge, the women reached the Triaton gardens, where they saw a lady sketching a drawing. The mysterious lady had long blonde hair and wore an old-fashioned summer dress. Charlotte was convinced it was Marie Antoinette.

Strangely enough, the old bridge that they described had, in fact, already been dismantled by 1911. How could the two women have known about this vanished bridge? Since this event, there have been rumours about sightings of both Marie Antoinette and King Louis XVI. The royal couple suffered bloody beheadings, and Louis XVI allegedly still roams the palace halls. 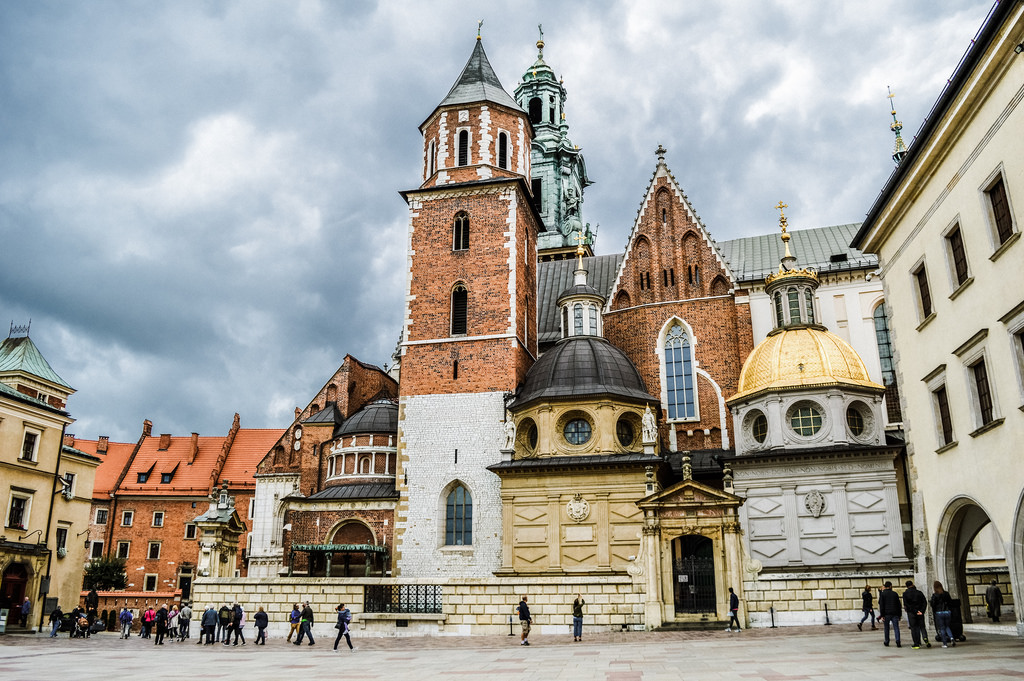 2. Wawel Cathedral in Krakow: The Burial Chambers of Polish Kings

For the second story, we move from one royal story to another. Krakow used to be Poland’s royal capital, and is still considered to be the cultural heart by many. The most obvious traces of the city’s regal status can still be seen at Wawel Hill. This is where you will find Wawel Castle, the former residence of the Polish kings.

The Wawel cathedral was the medieval burial site of sixteen different Polish kings, and their graves remain in the chapels.

The cathedral of Wawel can be found right next to the castle. This religious location was the medieval burial site of sixteen different Polish kings, and their graves remain in the chapels. Although apparitions may happen throughout the year, there is a legend that describes how the spiritual energy is strongest in December. On Christmas Eve, all of the former rulers allegedly gather in an underground burial chamber. I wonder what they might be doing every year. Maybe it’s just a seasonal gathering, like any ‘normal’ family?

3. The Forbidden City in Beijing: The Drowning of Concubine Zhen

If there had to be one place in Beijing that was truly haunted, it would undoubtedly be the Forbidden City. The former imperial palace has always been shrouded in mystery. For over 600 years of political intrigue, the Forbidden City was quite familiar with cases of betrayal and murder. It was almost impossible for outsiders to find out what truly happened within the walls of the city. 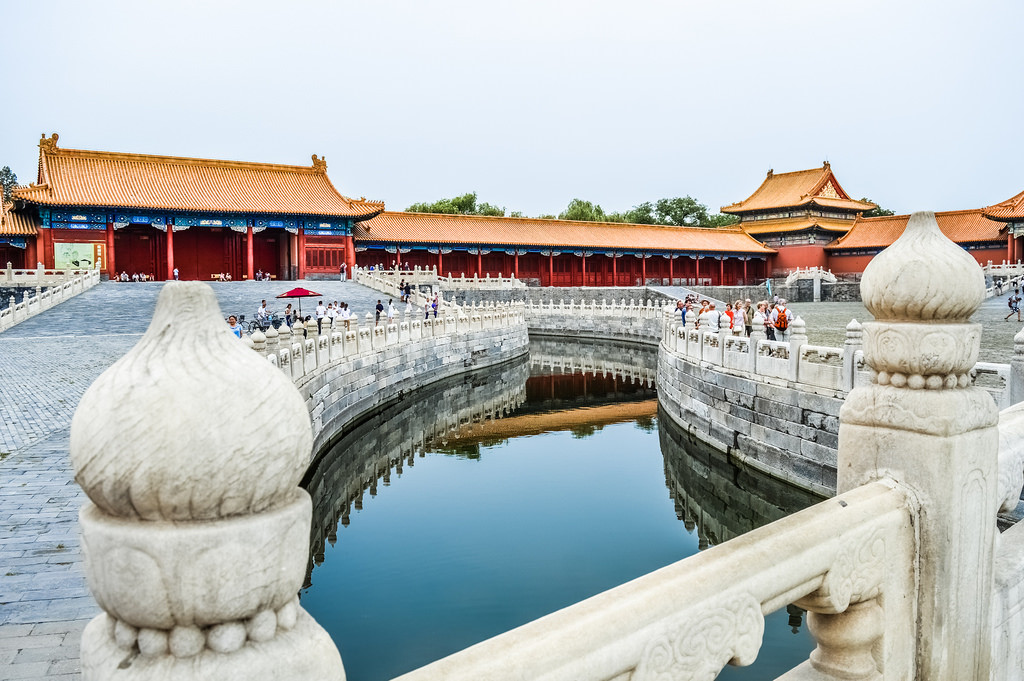 The best-known ghost story about the Forbidden City tells the tale a woman dressed in white, always weeping in the night. Nobody knows who she was or what brought her so much grief. Perhaps she is one of the concubines who were mysteriously murdered. According to one statement, Empress Dowager Cixi once ordered to kill consort Zhen.

The two women often disagreed and gave the young emperor, Cixi’s nephew, conflicting advice. This made it difficult for Cixi to exert her influence and execute her plans. The empress finally told one of her eunuchs to throw the high-ranking concubine into a well. They left the body in the well for a year, until they moved it to the mausoleum tombs. 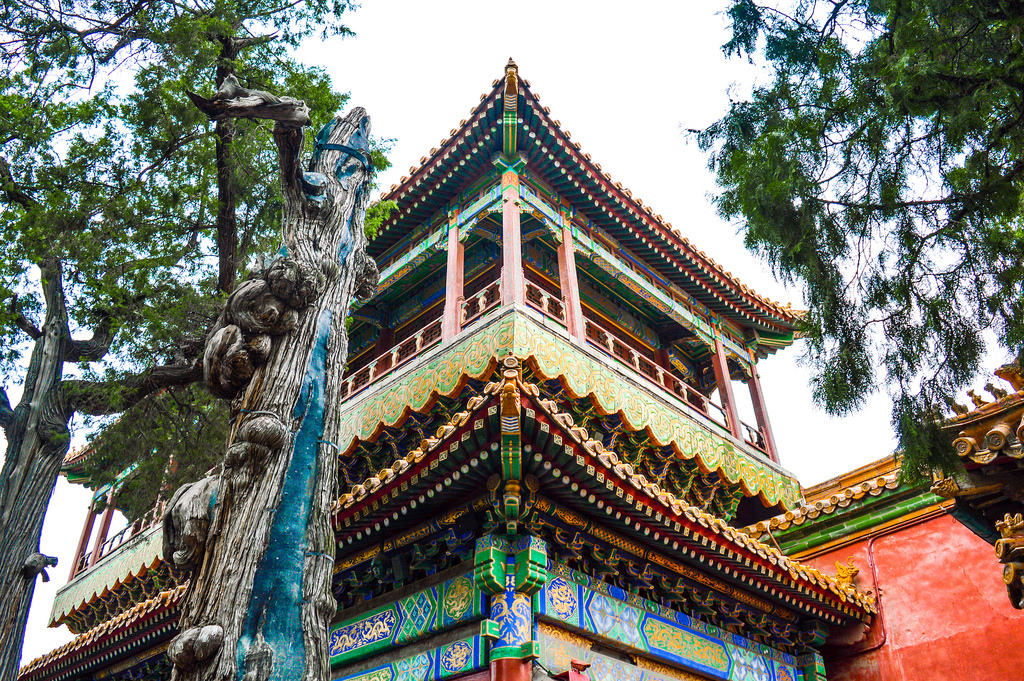 5. The Castle of Good Hope: The Cursing Spirit of the Colonial Governor

The Castle of Good Hope in Cape Town is the oldest colonial building in South Africa, stemming from the 17th century. Its history is…turbulent, to say the least. Part of the castle used to be a prison with cells and dungeons, where captives were reportedly tortured or even drowned alive. The darkest and most feared dungeon was Donker Gat, which translates into Dark Hole. Prisoners ranging from outlaws, rebels, and escaped slaves were regularly executed within the castle walls.

Part of the castle used to be a prison with cells and dungeons, where captives were reportedly tortured or even drowned alive.

One of the ghosts that allegedly haunts the castle is the spirit of Governor Pieter Gijsbert van Noodt. Van Noodt had the reputation of being a particularly unforgiving man. His voice can sometimes still be heard, angrily cursing. His death in April 1729 was a strange event indeed. There were seven soldiers who had deserted the army. They received a sentence from the council, but Van Noodt single-handedly decided to give them a death sentence instead.

Before his hanging, one of the soldiers cursed Van Noodt for his injustice. Later that day, Van Noodt was found dead in his office by an apparent heart attack. Van Noodt, however, was a hated man, so he might have actually been murdered. 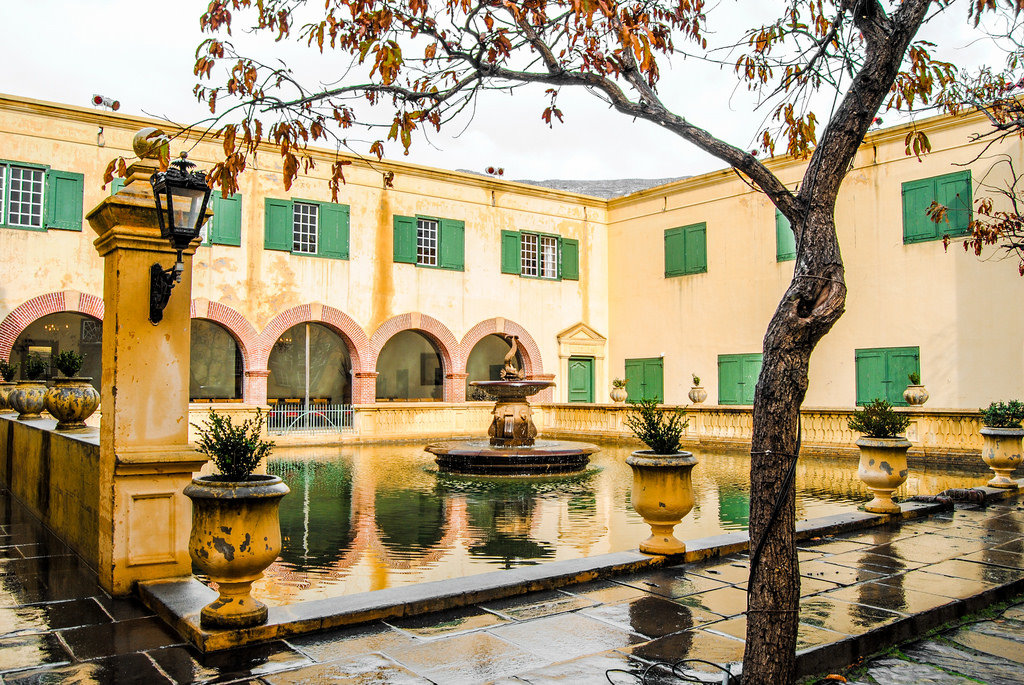 5. The Zeedijk in Amsterdam: The Girl who Murdered her Sister

I find the ghost story of the Zeedijk especially interesting, simply because I have passed this location so many times. The Zeedijk in Amsterdam is currently part of Amsterdam’s bustling Chinatown, but it used to be one of the oldest working-class neighborhoods in the city. The spirit of a woman called Helena can reportedly be heard screaming and crying, sending shivers down your back.

She checked to see if Dina was still alive, beat her to death, and left her sister’s lifeless body in the basement, so it would look like an accident.

Two of the 18th-century inhabitants of the Zeedijk were sisters Dina and Helena. Dina was dating a young sailor named Wouter, but her sister Helena had fallen in love with the same man. When Wouter was sailing the seas, he sent several letters to Dina. Helena, however, decided to burn these letters. Of course, Dina eventually found out and the two sisters got into a horrible fight.

+  A Love Letter to Paris

In the heat of the moment, Helena pushed Dina down the basement stairs. She checked to see if Dina was still alive, beat her to death, and left her sister’s lifeless body in the basement, so it would look like an accident. Helena ended up marrying the sailor, but finally confessed to the murder on her deathbed. Wouter expressed his disgust and left her to die alone. 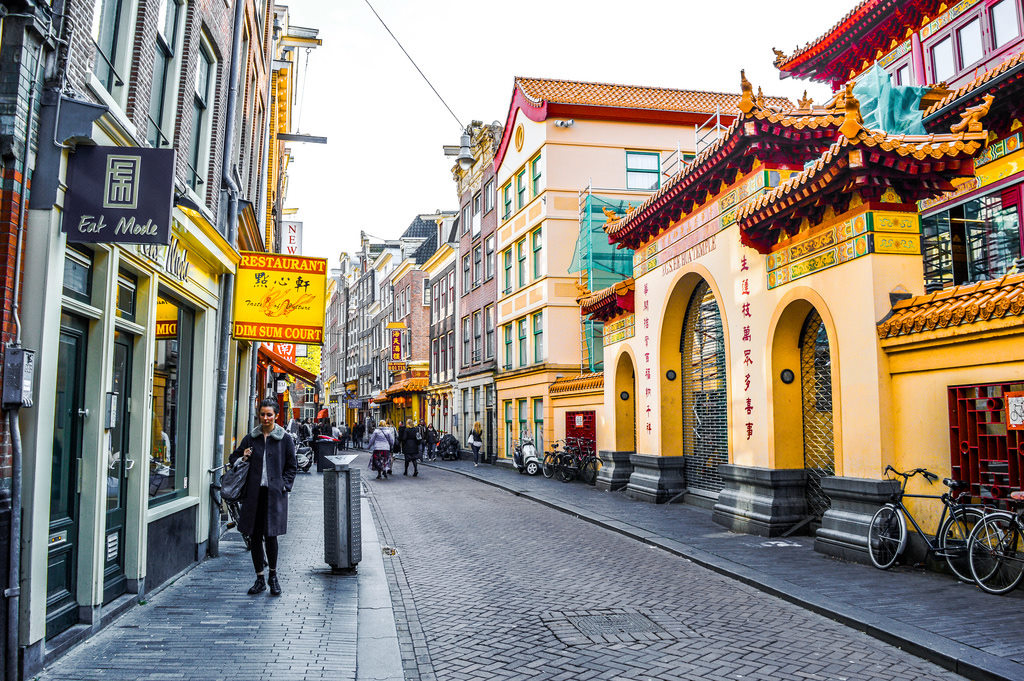 6. The Royal Exchange Theatre in Manchester: The Glamorous Couple in the Greenroom

The Royal Exchange Theatre in Manchester dates back to the 18th century, but was rebuilt several times. It used to be the site where commodities like textile and cotton were exchanged. The exchange suffered a lot of damage during the Second World War, but has since been restored and re-purposed as a theatre. 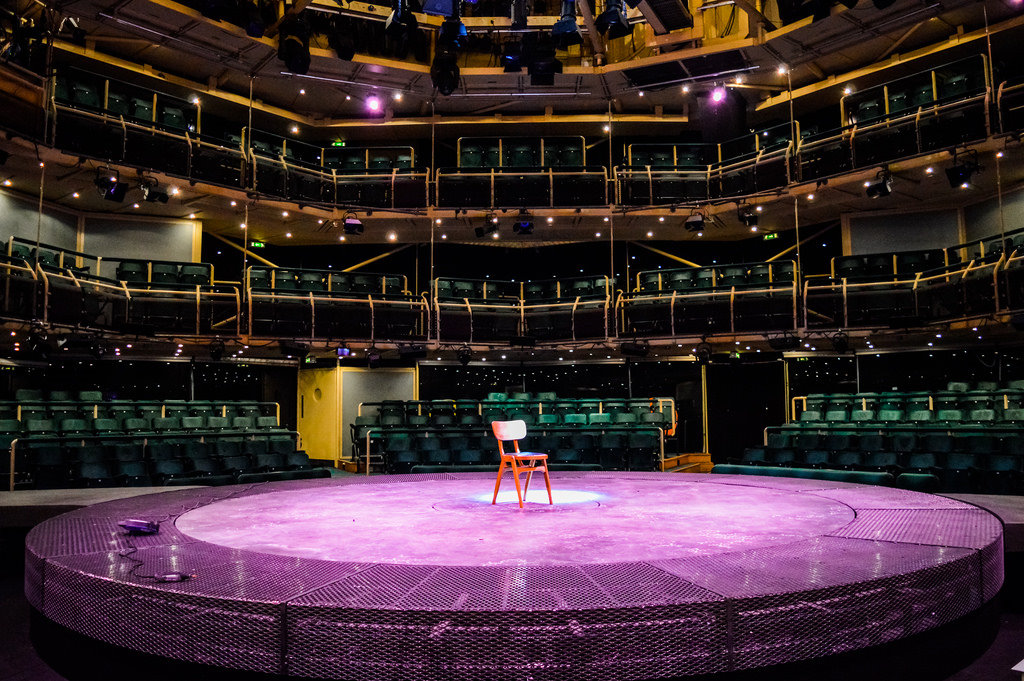 One of the ghost stories that surrounds the old exchange is linked to the theatre’s haunted greenroom. The greenroom is where actors usually wait before it is time to go on stage. There are reports about a dazzling couple that haunts the theatre. Descriptions feature a handsome man in a fancy 20th-century suit, together with an elegant blonde lady with the air of a celebrity.

Nobody quite knows who they are, but most witnesses agree that they must have been actors from a stage production many decades prior. It seems these workaholics couldn’t give up on their careers, even in death. 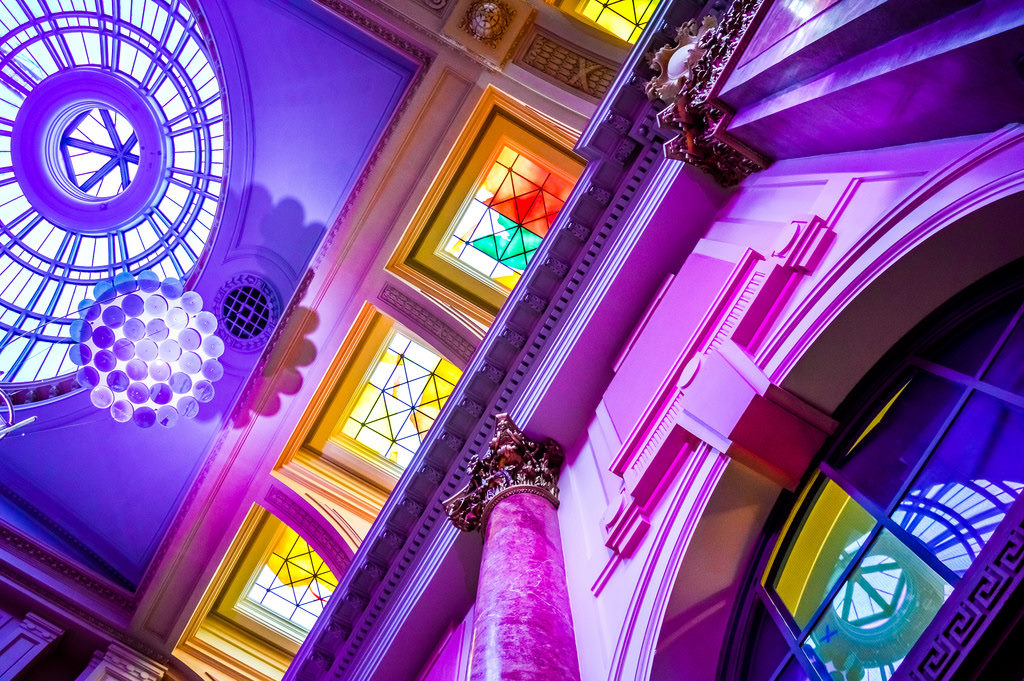