The island of Terceira has some incredible natural landscapes with lots of green fields with cows and beautiful views of an endless ocean. Nowadays, its economy is mainly based on agriculture, specially dairy farming and its processing industries. However, that hasn’t always been the case. On Terceira, you will find the oldest city in the Azores: Angra do Heroísmo, or the Bay of Heroism. The hidden history behind Angra do Heroísmo starts in the Late Middle Ages, when it became a trade port. This, however, isn’t the full story.

A view of Angra do Heroísmo’s marine

The history behind Angra do Heroísmo: Great Navigations and World War II Airbase

Angra do Heroísmo is located on the south coast of Terceira Island, in the Portuguese autonomous region of Azores. The island has an interesting volcanic origin and had great importance in the establishment of the Portuguese Empire. Angra do Heroísmo was a strategic point during the Great Navigations, a crucial era of exploration. Later, it also served as the Allied airbase in World War II and it is still an important military base in the middle of the Atlantic Ocean.

The dairy farms of Terceira Island.

Countryside of the island.

The 1980 Earthquake and Unique UNESCO Classification

In 1980, the island went through a major earthquake of magnitude 7.2 on the Richter scale. It was responsible for the destruction of more than 75% of Angra do Heroísmo’s buildings. After this terrible event, the local population articulated its reconstruction with some help of the Portuguese State.

After the reconstruction, the city was classified as World Heritage by UNESCO. Angra certainly deserved this title because of its importance as a strategic point for the first European navigation routes. Moreover, the city’s unique heritage cannot be ignored: it is recognized as the only place on Earth where buildings of the Portuguese and Spanish Empire coexist.

The city is the only place on Earth where buildings of the Portuguese and Spanish Empire coexist.

Despite of being classified by UNESCO within Angra do Heroísmo’s heritage, the Fortress of São João Baptista is still an unknown monument for most people. The fortress works within a system of fortifications designed to function in different scales of defense. It goes from local scale, with other fortifications on the same island, until a global one, that covered the entire empire overseas.

The UNESCO-classified fortress was part of a global network of fortifications that covered the entire Portuguese empire overseas. 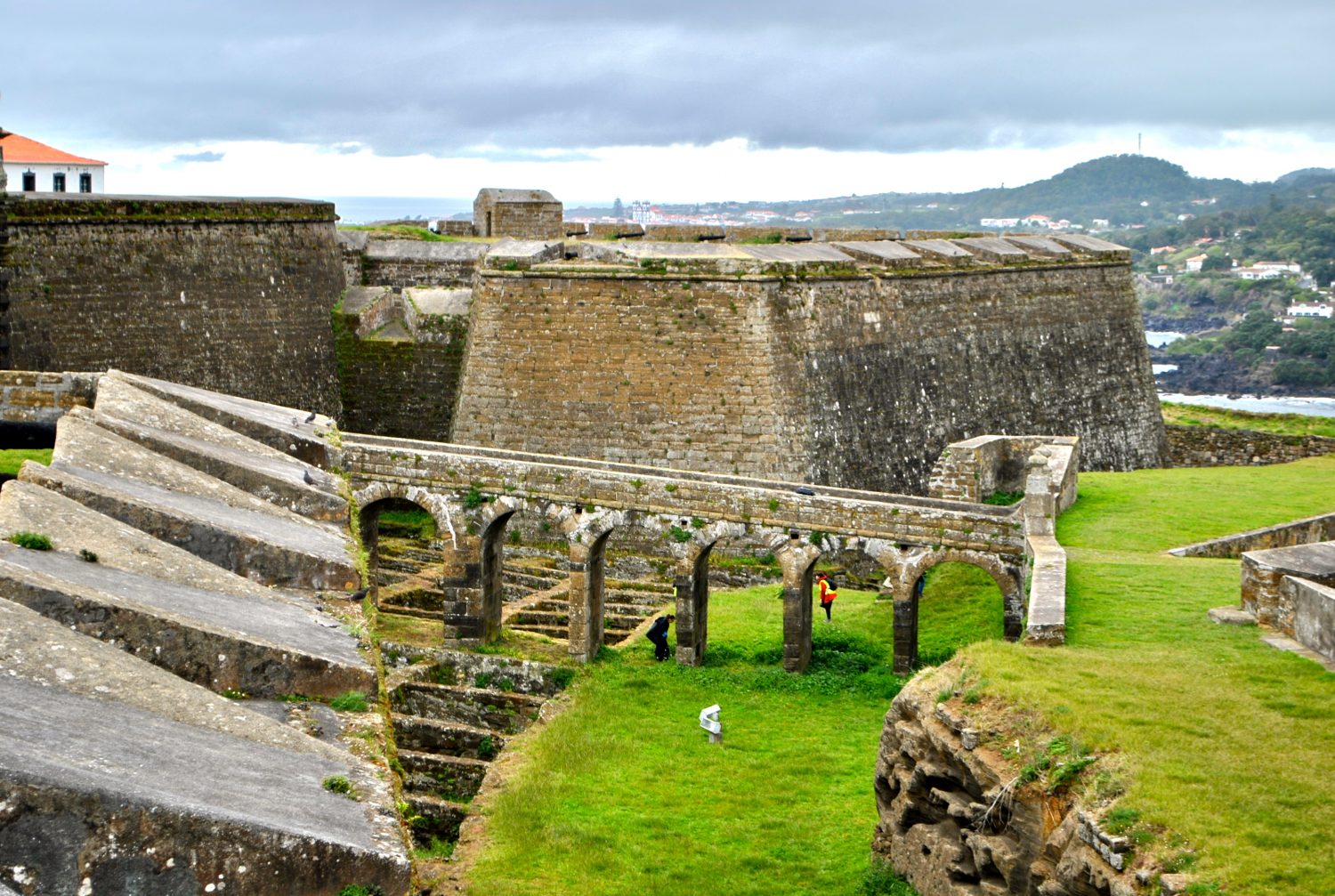 The construction of the monument started at 1583 by Spanish command. Later, the Portuguese Empire conquered the place and finished its construction. The complex topography of Monte Brasil provided strategic advantage for its defense. What’s more, a great part of its constructed value is on this harmonious fit between man and nature. The huge bulwarks assimilates stones from the place itself, fitting the preexisting slope in a delicate way. As a result, in some places is difficult to tell where one ends and the other begins.

Monte Brasil, the location of the fortress.

The Fortress main bridge and moat

How the Military History Lives on Today

Another interesting fact about the fortress is the continued presence of the military forces. This gives great historical and symbolic value to the place, keeping its original use for more than five centuries. Besides giving life to the military defense constructions, the troops are also responsible for the fortress’ maintenance. This is how the history of Angra do Heroísmo lives on today.

+  8 Places in Europe to See the Best Cherry Blossoms

Clearly, there are many hidden beauties in Angra do Heroísmo that are still undisovered. There is no other place that shares the same story. So, I really think you should add it to your own bucket list. You won’t regret it.

Hello there! I’m Mariana, a brazilian architect from São Paulo, currently based in Coimbra, Portugal. In love with photography, art, design, antiques, good food and (obviously) travelling. I’ve been to 18 countries, lived in 3 of them, and my goal now is to take a trip around the world before the age of 30.