There is no doubt that Venice is one of the most iconic tourist destinations in the world. The ‘picture-perfect’ city has become such a popular attraction that the staggering amount of tourists is starting to have serious negative consequences. Every year, Venice receives around 22 million visitors, while the historic centre has a local population of only 55,000 residents.

Unfortunately, not all of those tourists know how to behave themselves respectfully at a valued World Heritage Site. From jumping into the Grand Canal, resting and having picnics in private doorways, to sightseeing in swimming trunks and bikinis: Venice has seen it all. This week, the councillor of tourism Paolo Mar has announced a summer campaign to stop tourists from ruining the city: #EnjoyRespectVenezia.

#EnjoyRespectVenezia: The Locals are Angry, and They’re Right

The new behavioural campaign comes with 12 golden rules, some of them legally binding to discourage tourists once and for all. As a result, transgressors of the laws will now have to face serious fines, anywhere between €25 and €500. Pausing too long on bridges is one of the rules, which may initially sound a bit extreme. The truth is, it really isn’t. It’s easy to underestimate the way tourists are affecting the resident’s quality of life.

I visited Venice in the summer of 2016 and made this mistake myself. I was leaning on a bridge, trying to take a photo of the Grand Canal, when a local elderly man suddenly starting yelling at me. At first, I was confused and angry and started to think of the Venetians as bad-tempered people. Later on, I realised the old man was walking with a cane and couldn’t properly cross the bridges anymore. There were too many tourists leaning on the sides, which made it impossible for him to hold on to railing and balance himself.

I was taking a photo of the Grand Canal from a bridge, when a local elderly man suddenly starting yelling at me. I realised the old man was walking with a cane and couldn’t cross the bridges anymore. There were too many tourists leaning on the sides, making it impossible for him to hold on to railing. 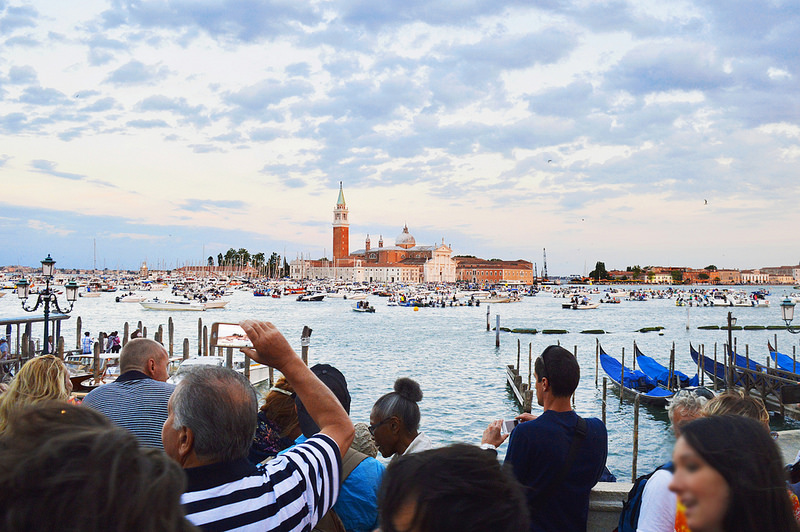 Giant Cruise Ships and Souvenirs: This is not Disneyland

Tourism is a tricky topic in Venice. Of course, many of the locals are dependent on the industry, earning their money in the service and hospitality sector. Just think of museum staff, hotel receptionists, gondoliers, souvenir shop owners, or waiters in restaurants. The problem in Venice is, quite simply, an extreme overload of visitors. The giant cruise ships that regularly stop in the harbour aren’t helping either, especially considering a lot of them are taller than most buildings in Venice.

+  A Love Letter to Breda

All of these factors are related to what Sharon Zukin has called the process of “disneyfication:” other economic sectors are neglected and cities become centres of cultural consumption. Since the demand for tourist satisfaction is so high, the city starts to increasingly shape itself into a “theme park” environment. These are generally cities where the ratio of permanent residents to rented AirBnB locations becomes severely unbalanced, causing social unrest. The city is threatened to become a place of total circulation; it is not designed for permanent residents anymore, decreasing the quality of life for locals.

It’s a process of “disneyfication:” other economic sectors are neglected and cities become centres of cultural consumption. Since the demand for tourist satisfaction is so high, the city starts to increasingly shape itself into a “theme park” environment.

Why Not Introduce a Tourist Quota?

For a few years now, rumours have been spreading about introducing tourist quotas in overloaded cities like Venice. The problem with this idea is not that governments are unwilling to consider the option. In reality, tourist quotas are legally impossible to implement, at least in the European Union. Both the EU freedom of movement laws and Italian constitution would prevent Venice from stopping incoming visitors. You cannot simply close the city. Furthermore, even less ambitious plans to raise the tourist tax are unfeasible, since tax rates operate on a national level.

One thing is for sure: if you want to visit Venice, try to avoid visiting in the summer months. If there’s really no other way, just be mindful of those 12 golden rules. The locals deserve it.

Via: The Telegraph, Independent.

+  Why visiting Macedonia and Kosovo is Worth It