Dresden is a city with a completely unique backstory. The East German city is the capital of the free state of Saxony, and has been a major vein in Northern Europe’s cultural heart for a very long time. From the early Middle Ages onward, Dresden was an incredibly important place for both Slavic and Germanic cultures. This was because the Kings of Saxony chose the city as their residence and, for a while, it even became the family seat of Polish monarchs. This lavish royal history certainly left its marks on the city, especially through the elegant architecture and bustling art scene. However, there was a time when all of it was reduced to rubble, and it happened quite recently. 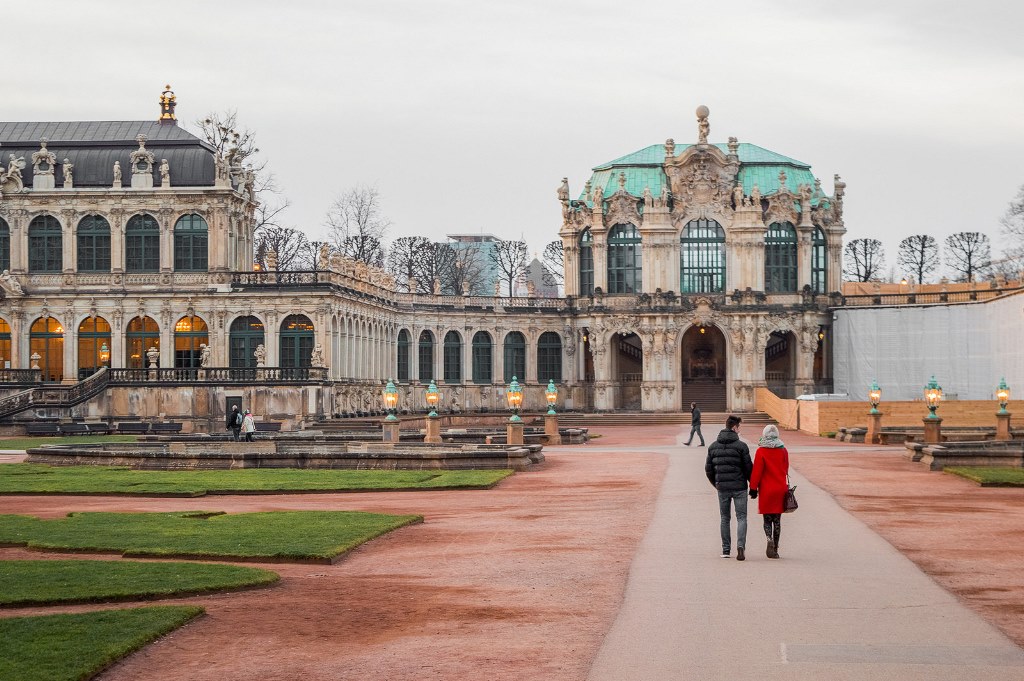 During World War II, the city was bombed and almost completely destroyed in 1945. Roughly 25,000 people lost their lives, including innocent citizens, and the city center became unrecognizable. After the end of the war, Dresden became part of the communist DDR (German Democratic Republic). During those years, funds to rebuild the city remained scarce for several decades. Then, another major change happened in 1990, when Germany finally reunited.

The city was bombed and almost completely destroyed in 1945. Roughly 25,000 people lost their lives, including innocent citizens, and the city center became unrecognizable.

Since then, Dresden has blossomed into another period of cultural bloom. So, no matter how strange this may sound, there has never been a better time to discover the city’s regal background. Foreign visitors are welcomed with open arms and the royal treasures have never been so accessible to ‘regular’ commoners (like you and me). Without further ado, here are 6 things to do in Dresden to discover the city’s royal history.

The Royal Route: 6 Utterly Regal Things to Do in Dresden 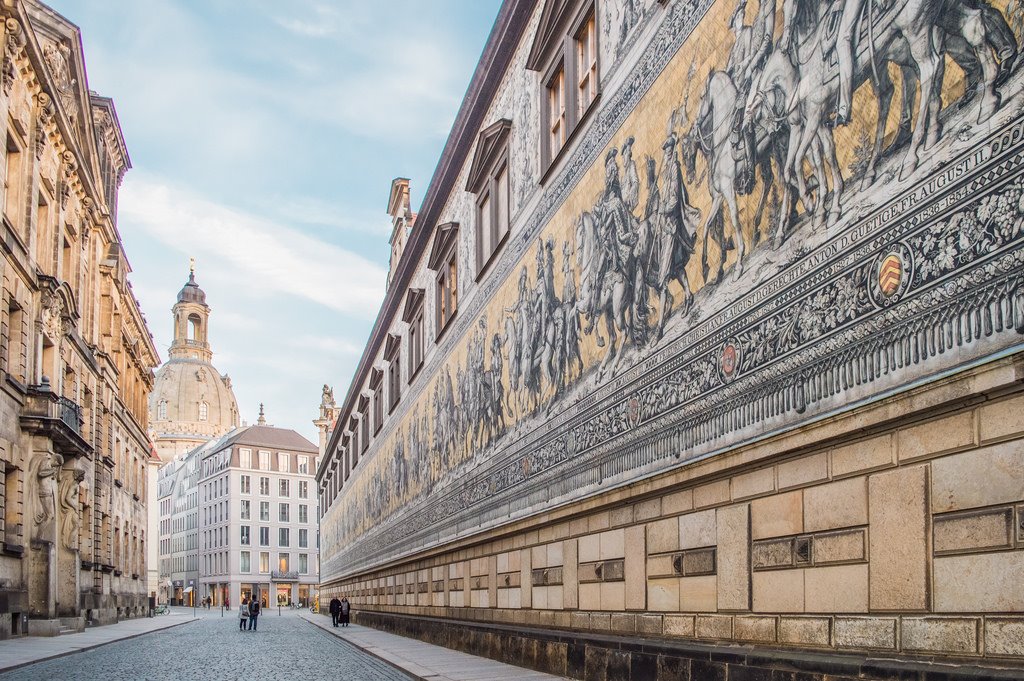 1. A Parade of Royals: 35 Rulers on the Fürstenzug Mural

An excellent way to start your royal route through Dresden is the Fürstenzug, which loosely translates into the ‘Parade of the Royals’. This 102 m mural can be found on the outer wall of the Dresden Castle, which was part of the stables courtyard. The Fürstenzug holds the title of being the largest porcelain artwork in the world, which is already enough of a reason to go and find it in the Altstadt (Old Town) district. Without a single doubt, I can assure you the immensity of this artwork will make you look twice.

Why is it a great starting point for your route, you ask? Well, because it gives you a literal overview of the rulers of Saxony from the 12th to early 20th century. The Fürstenzug features 35 military commanders, electors, dukes, and kings that were once in charge of the region. The official occasion for creating this massive mural was the 800th anniversary of Saxony’s royal family in the 1870s. The mural was originally a painting, but the art work was quickly fading in harsh weather. So, eventually, the paint was replaced with over 20,000 porcelain tiles. 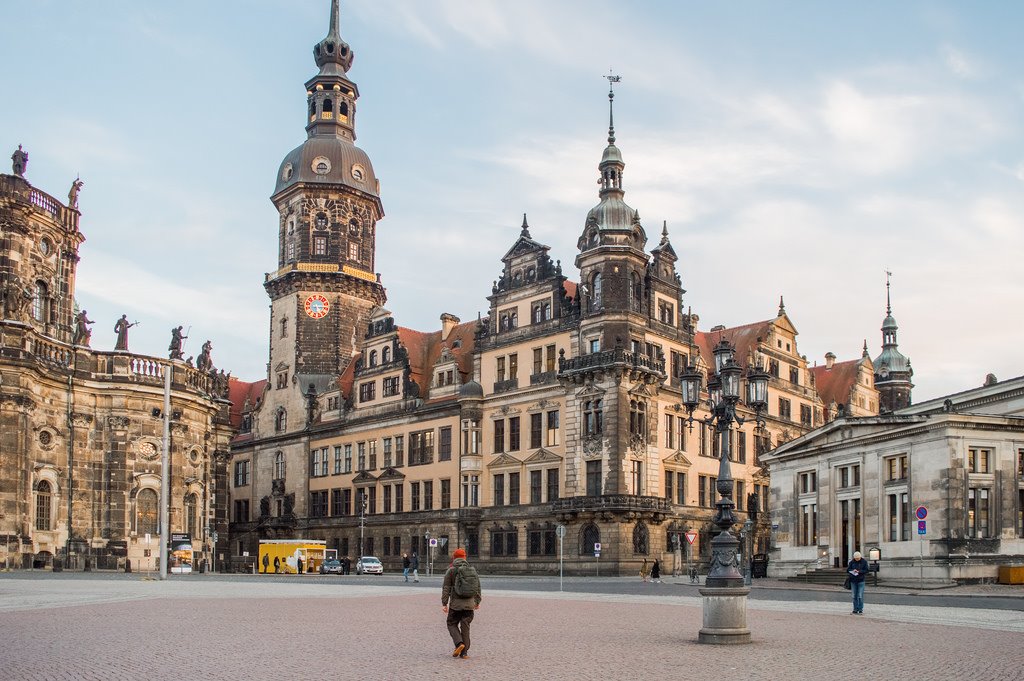 2. Glitter and Gold Inside the Residenzschloss, Dresden’s Royal Palace

Obviously, the royal route in Dresden would be rather incomplete without any mention of the Royal Palace, or Residenzschloss in German. Unsurprisingly, the palace is an unfailing highlight among the monuments in Dresden Altstadt. Although the palace was largely destroyed in the 1945 bombing, its reconstruction was finally completed in 2013. From a street view, the exterior reveals an architectural mixture of several different styles, while the inside hosts a few of the finest museums in the country. The palace served as the home of the Saxon royals for nearly four centuries, making it one of the oldest buildings in the city.

The real ‘crown jewel’ among the Palace museums is undeniably the Green Vault, or Grüne Gewölbe. This vault is actually the the largest collection of treasures in Europe.

The museums within the castle include the Dresden Armory (including queenly dresses and knightly helmets), the Numismatic Cabinet (museum of coins and medals), and the Collection of Prints and Photographs. However, the real ‘crown jewel’ among those museums is undeniably the Green Vault, or the Grüne Gewölbe. Interestingly, this vault is actually the the largest collection of treasures in Europe. As long as you like a bit of glitter and gold, it should be worth a visit for virtually everyone. 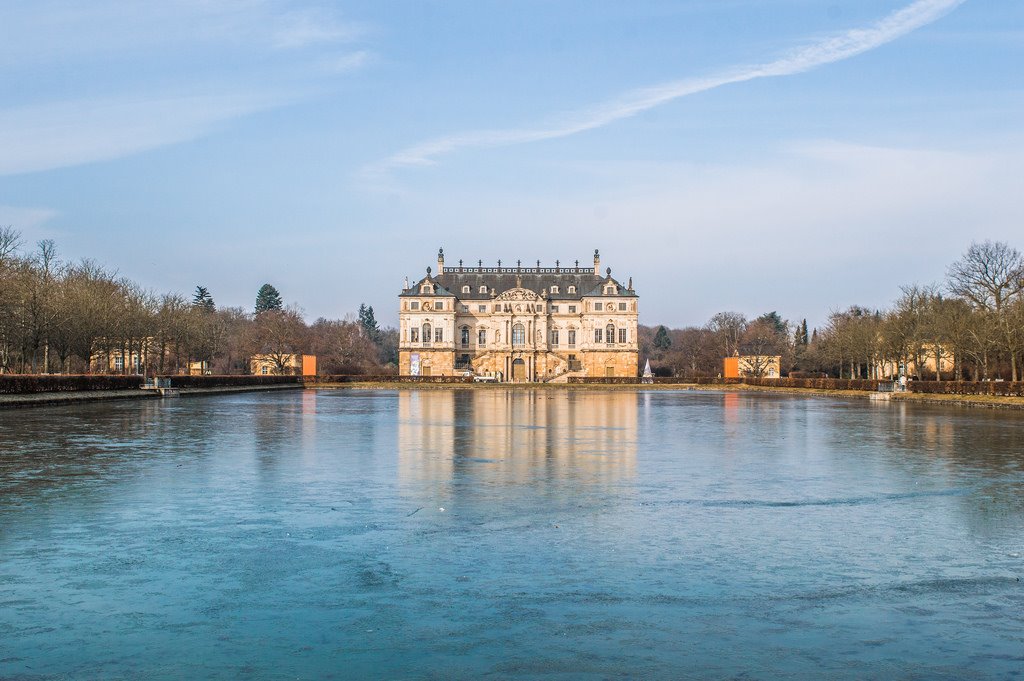 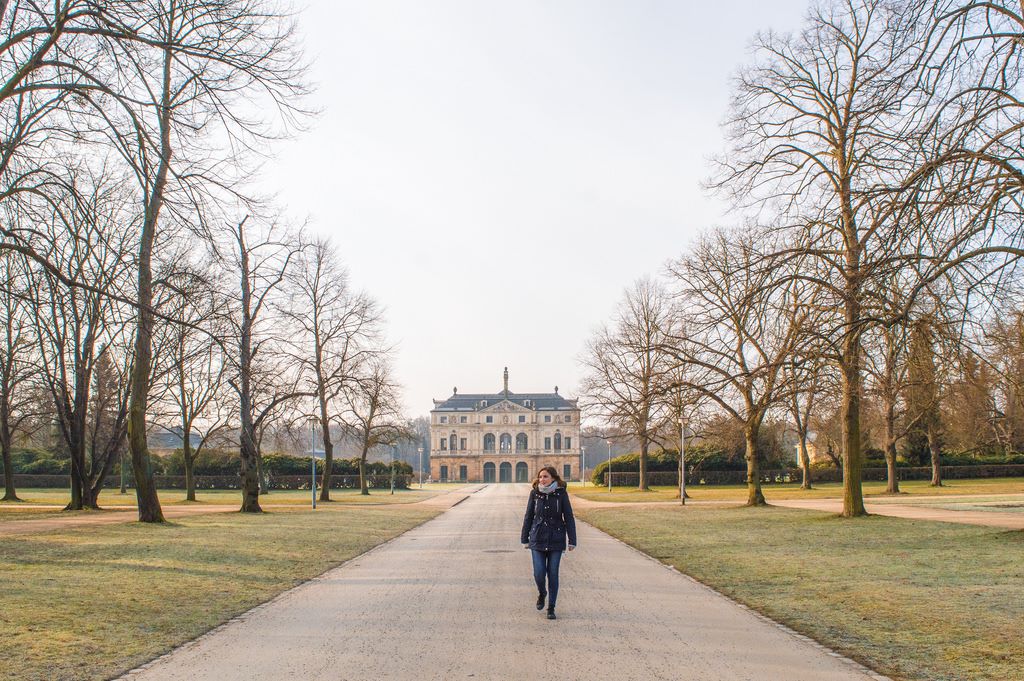 3. Mirror Reflections at the Großer Garten

One of the most regal outdoorsy places in Dresden is the Großer Garten, which simply translates into ‘Great Garden’. The garden was originally a private garden for John George III. He was the Elector of Saxony in the 17th century, and he desired a quiet place outside the town center. As you will notice, the Großer Garten is a baroque park with perfectly symmetrical avenues. At the very center of the park you will find the Sommerpalais, which was a little summer palace for the royals. The rectangular pond in front of the palace always creates an enchanting mirror reflection, no matter what season. Definitely a golden tip to remember for photographers and ambitious Instagrammers.

As the sprawling city grew past the old city walls, the Garten eventually became a public park in 1814. To this day, it is a lovely place to relax and take a leisurely stroll. As it was no longer a private estate, parts of the park became a zoo and botanical garden at the end of the 19th century. Since then, the inhabitants of Dresden have been able to fully enjoy the green space.

4. The Royal Crypt at the Dresden Cathedral

The 18th-century Catholic Cathedral in Dresden, locally known as the Hofkirche, is a significant architectural feature along the royal route. While the majority of inhabitants in Dresden were protestant, their rulers remained Catholic. The person who ordered the construction of the church was August III. At the time, he did not only rule Saxony, but was also the King of Poland.

Since most people in Dresden preferred the nearby protestant church, the royal family and high-ranking officials privately visited the cathedral. August even decided to connect the cathedral to his home (the royal palace) with an elevated walkway, as you can see in the photo above. As the years passed, the cathedral also became the place where 49 Saxony royals (and several spouses) found their final resting place. The cathedral’s crypt still contains the heart of King August II the Strong (slightly freaky but fascinating), as well the last king of Saxony; Frederick Augustus III. 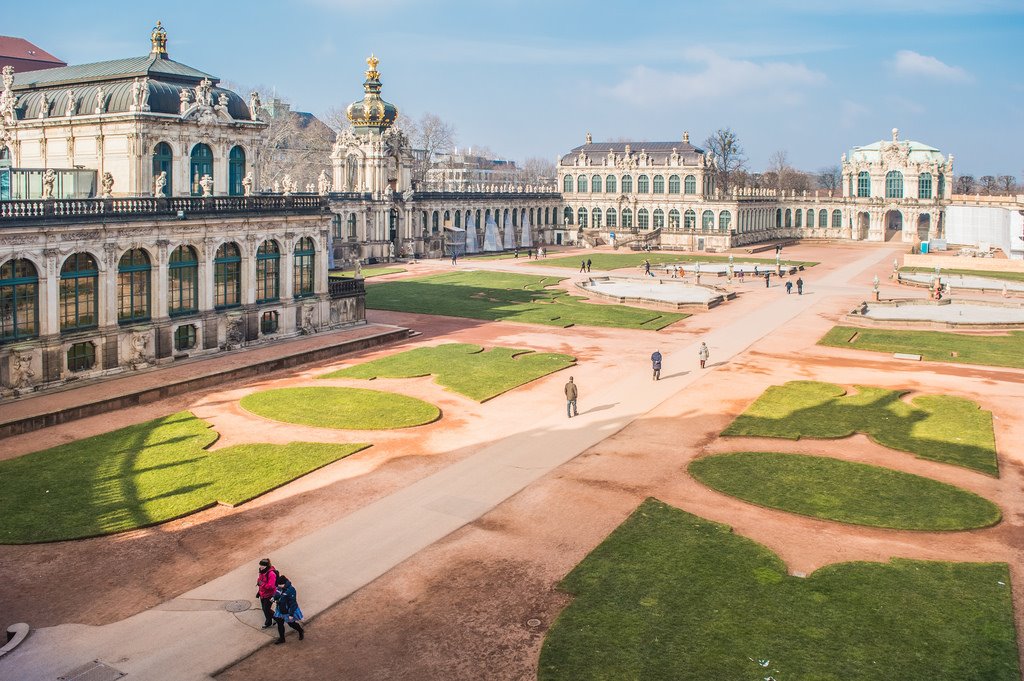 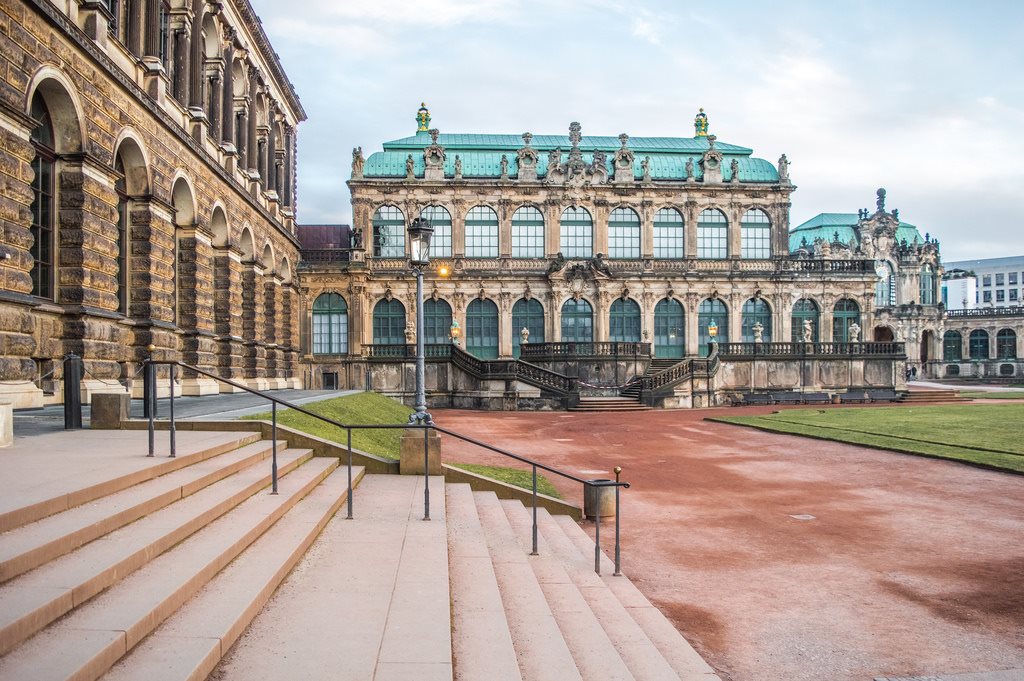 5. The Zwinger, Dresden’s Version of Versailles

When you realise how many baroque and rococo monuments you can find in Dresden’s historic heart, you won’t be surprised that the city used to be known as the Jewel Box of Germany. Just a stone’s throw away from the Residenzschloss, you will find yet another royal palace called the Zwinger. Yes, you heard it right, one palace wasn’t quite enough for August the Strong. To be fair, the royal family didn’t build the Zwinger palace as a second home, or anything. Rather, August ordered the construction of the Zwinger because he was looking for a fancy place to entertain his friends. That’s right, the Zwinger was essentially a party palace for European Royals.

Just a stone’s throw away from the Residenzschloss, you will find yet another royal palace called the Zwinger. August ordered the construction because he was looking for a fancy place to entertain his friends. That’s right, the Zwinger was essentially a party palace for European Royals.

In the late 17th century, Augustus the Strong had just returned from a tour through Italy and France. This was also the period when Louis XIV settled his royal court at the infamous Versailles. Augustus had just been elected as King of Poland, which obviously was a major ego boost. He thought it was only appropriate that he would create a similar court for himself in Dresden. So it happened, and the Zwinger became a festival arena and exhibition gallery. Anyone can still visit the terraces free of charge, as well as the large courtyard, where most of the royal parties took place. Nowadays, the buildings themselves house various museums, like the Dresden Porcelain Collection. 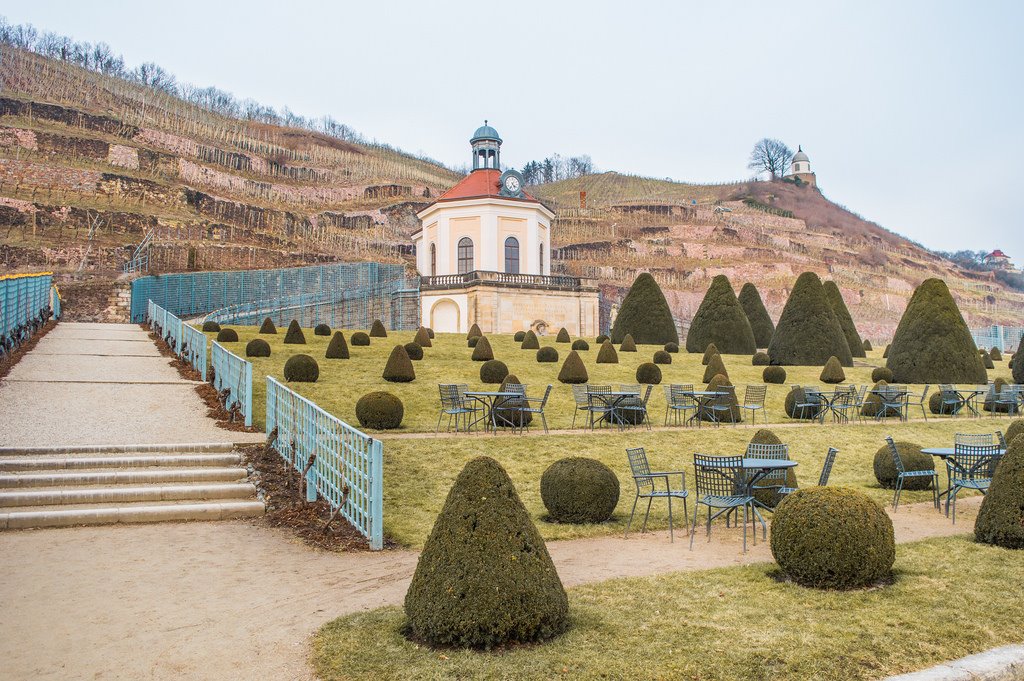 6. Vineyards and Feasts at Schloss Wackerbarth

Well, those royals sure knew how to have fun. Schloss Wackerbarth is a bit further away from Dresden’s historic city center, but it is an interesting piece of the royal puzzle nonetheless. Similar to the Großer Garten, Wackerbarth was an escape from the busy city center for the upper class. The elderly Count August Christoph von Wackerbarth was looking for a place to spend his older days in peace (and pleasure). He eventually chose this spot, and ordered the court architects to design the manor in the 18th century. Along with a hillside vineyard, the land includes a landscaped garden with perfectly round and triangular bushes. Very impressive gardening work, I should say (although I’m not the best bushes expert).

Today, Schloss Wackerbarth is essentially a public park where you can relax or go on a walk along the vineyard. It is still a winery, and one of the most beautiful locations to explore Saxony’s 850 year history of viticulture. Summer and autumn are the best seasons to drop by for a visit, when there are plenty of cheese and wine tastings, open-air concerts, and ballet performances.

Disclaimer: This article is the result of a press trip via Dresden Marketing. All content on Globonaut is written on the basis of the (uncensored) opinions of our crew members.