Last month I took a trip to visit a friend in France. She’s recently moved to Colmar, in the province of Alsace, and so I was eager to stay with her for a few days and see somewhere new. Here’s what I managed to do whilst I was there.

I first flew to Basel (Switzerland), since Colmar doesn’t have its own airport. I arrived in the morning and took a bus to the town centre from the airport. I already knew that I wanted to spend the day in Basel Zoo (which is the oldest and largest zoo in Switzerland), but before doing so I wondered around the town for a bit. I found myself at the Town Hall (which is 500 years old!). It was so beautiful. Each wall was painted so extravagantly, and there were so many ornate wood carvings. These photos definitely don’t do it justice…

One of the intricate interior courtyard walls.

I spent the rest of the day at the zoo (costs 15eu/15CHF for students) and enjoyed it very much. I spotted quite a few baby animals: gorillas, chimpanzees, wild pigs, and flamingos to name a few. I’d never seen a flamingo chick before, so it was a bit surprising to see that they’re born so white and so fluffy!

On the second day I visited the Chateau du Hohlandsbourg; a ruined castle located on top of a mountain close to Colmar. The drive up to the castle was pretty amazing. We passed vineyard after vineyard (Alsace is a well-known wine region), and drove through dappled forests – truly beautiful. The castle itself dates from 1279. Over time it had fallen into disrepair and ceased to be a functioning castle. However, in the 1990’s part of the castle was restored and it became a cultural and historical centre. I spent the day romping on the ramparts, checking out the amazing views, and imagining what it would be like to live in such a castle in its heyday.

+  Rotterdam will be the first city with a Floating Farm

On the third day I went to a reintroduction centre. The centre was set up in 1976 to aid in the breeding and reintroduction of storks back into the wild that is the Alsace province. The stork is a major symbol in Alsace, but in the 60’s, numbers dramatically fell. However, since the set-up of the centre, stork numbers have increased rapidly and the elegant birds can be found nesting all over the province. As well as storks, the centre is also home to cormorants, otters, and coypus. The highlight of the day was the live show where they showcased the natural fishing talents of some animals. Small, live fish were introduced to a large pond and the audience could observe how otters, cormorants, penguins, and a sea lion would use different methods to catch the fish. It was really incredible to see these natural behaviours in a live setting.

If you’re interested to learn more about the centre, or the coypu in particular, then feel free to check out a post I wrote on my personal blog.

On my last day I finally went into the centre of Colmar. It’s such a quaint little town with quaint and colourful little buildings. I enjoyed walking around the town and having lunch with my friend by the canal. The weather was so perfect and we were treated to a (rather random) BMX bike performance. 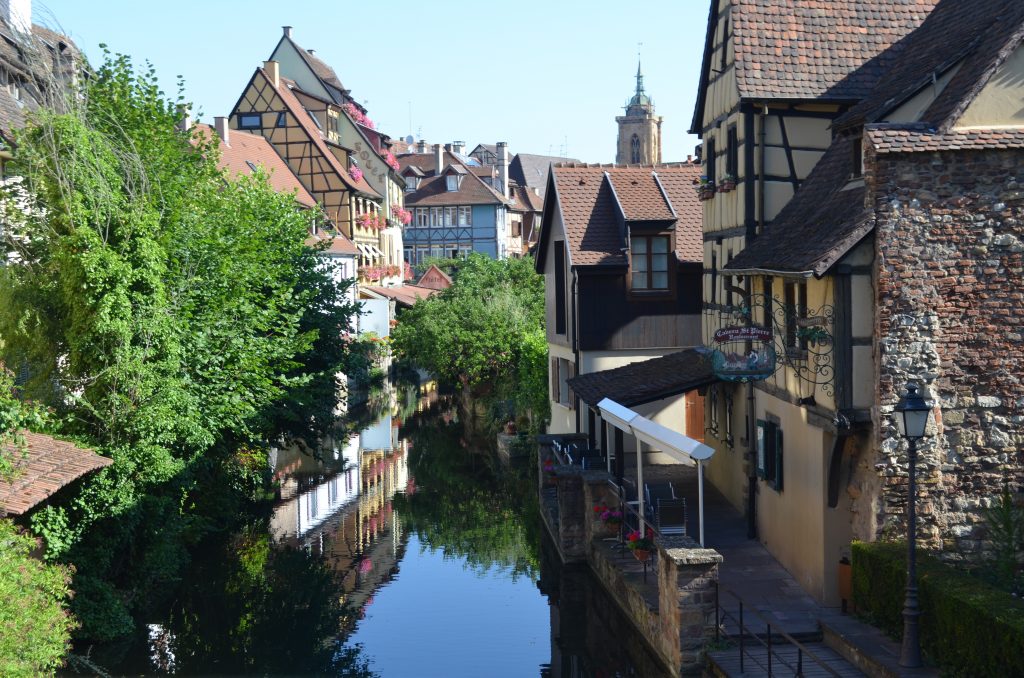 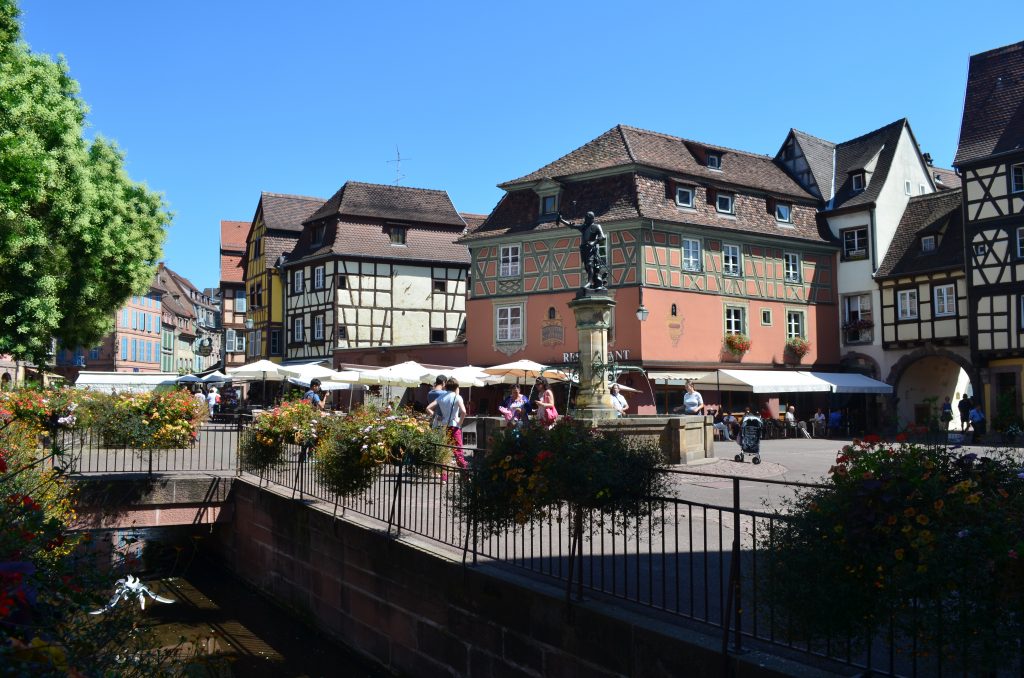 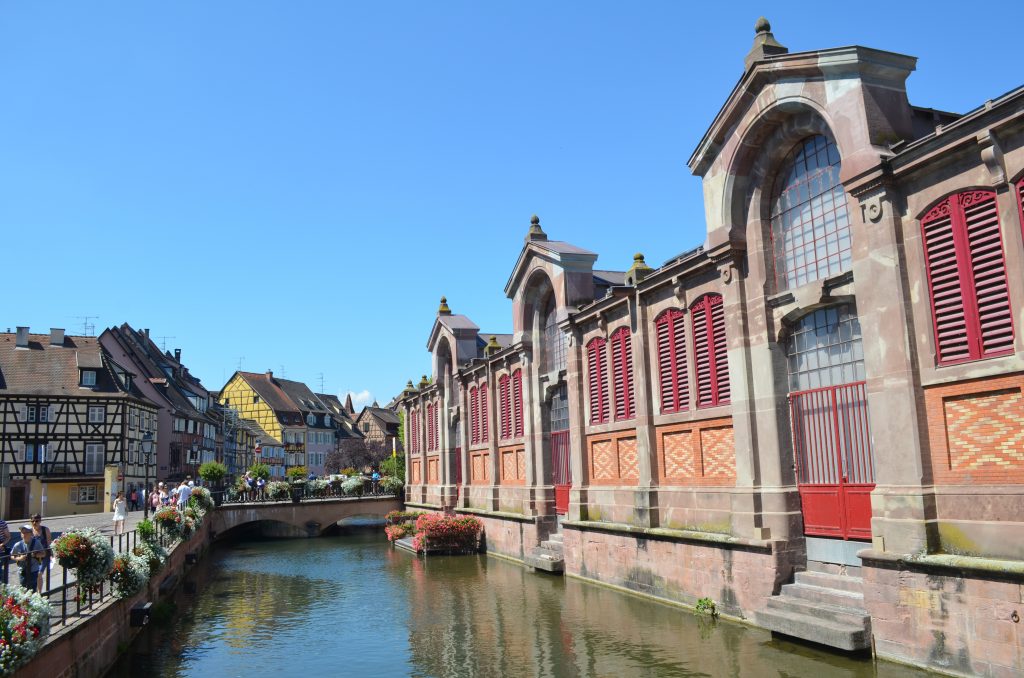 After lunch we visited the Museum Unterlinden. Part of the museum building used to be a convent and much of it is dedicated to religious art. This particular painting made us laugh quite a lot, so I just had to take a photo of it. Check out the bottom right hand corner to see why.

The other part of the museum is much more modern and contains art from the 20th and 21st centuries. I personally preferred the medieval art because it was a lot more interesting, historical-wise, and plenty entertaining!

I really enjoyed my stay in Alsace. I managed to see quite a lot in the four days and I was super lucky with the weather (clear skies and sunshine every day – a much needed break from rainy Amsterdam where I usually live).  There so much more to see and do in the area, so I hope I get to visit again soon!

I have the travel bug! I like nothing better than planning my next trip and then heading there to submerge myself in the local culture, using the sentences of a language I learnt on the plane over, and discovering the area through my stomach. Travelling, for me, is so much more than just visiting a new country. It’s the perfect opportunity to learn, to feel inspired and to meet people you wouldn’t have met just sitting on your sofa. As well as travelling, I’m a big reader and a science devotee. I write about my literary adventures and scientific understanding on my own blog, ‘When Literature and Science Collide’, so you’re welcome to visit me there too!