A few weeks ago, I was sitting in my Berlin apartment and waiting for the feedback on my thesis to come back. I suddenly had the thought “what am I doing here when I could be travelling?” So I opened up my laptop, started searching for cheap flights, and an hour later I had booked a 9-day trip flying into Skopje, the capital of Macedonia.

Usually I’m not that spontaneous, so this was a first for me. But I decided to keep the momentum going and plan as little as possible in the time leading up to my trip. This turned out to be a great decision: from the plane ride to Skopje, talking to the woman sitting next to me, through many people I met along the way, I ended up basing my decisions on where to go from people around me.

I arrived in Skopje and walked to my hostel. Right away, I met two German guys (there were a lot of Germans everywhere, due to the cheap flights going to the Balkans and the fact that students were on vacation), had some dinner and went to a craft beer bar overlooking the city in the Old Bazaar city quarter, a beautiful old place.

Skopje is a crazy-looking place. The government has invested massively in making the city center look impressive. This has ended up in very pompous riverside promenades and statues in front of big, white, new building facades that seem very new. On some, you can still see colorful stains, where anti-government protesters threw paint at the white walls. It’s a surreal experience walking along the river at night. Flanked by statues, which the whole city is full of, in front of the National Opera and Ballet, loudspeakers are playing classical music. In a way, it feels completely fake, and gives a bizarre atmosphere to the whole center.

The next day, I walked around the city. I went up to the fortress overlooking the city, from which you also have a beautiful view of the still snow-topped mountains. I spontaneously visited the National Gallery of Contemporary Art, housed in an old bath house. Later that day, I had an amazing (and so cheap!) dinner with someone I met in the hostel. On our way back, we ended up crashing a fashion expo opening at the National Opera, where we mingled with the cool and beautiful and tried not to attract too much attention.

We ended up crashing a fashion expo opening at the National Opera, where we mingled with the cool and beautiful and tried not to attract too much attention. 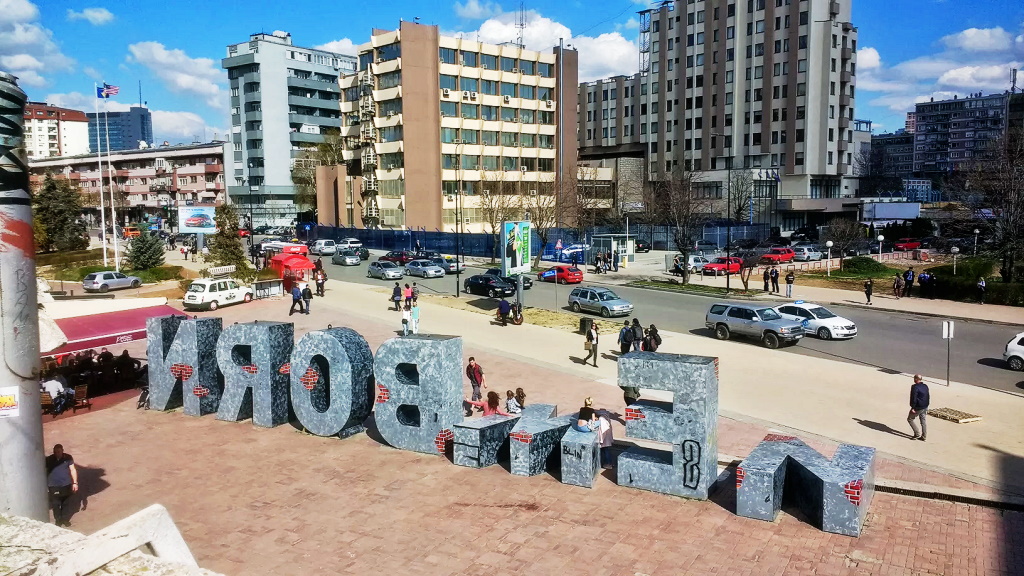 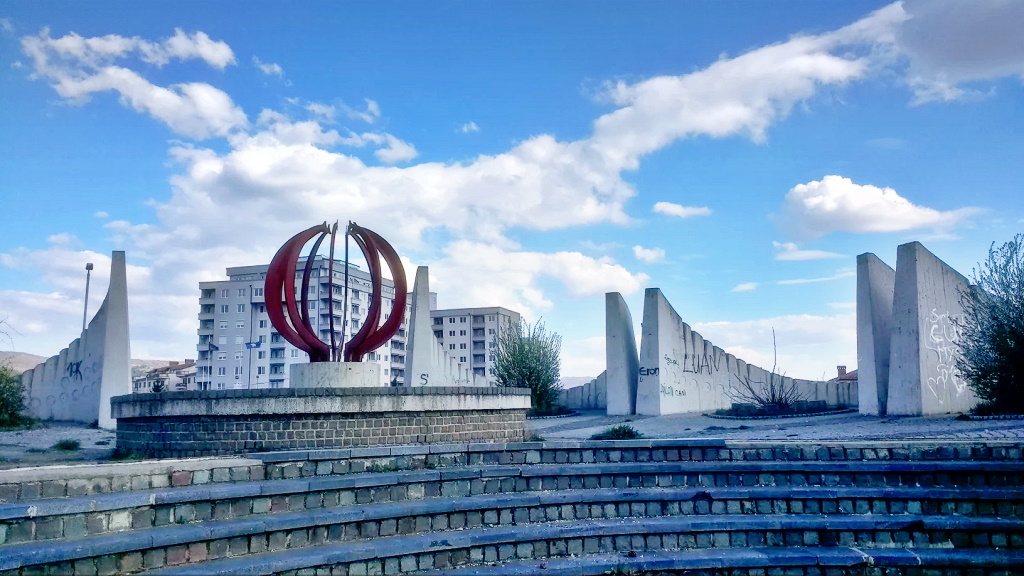 I had originally planned (and taken out the respective currency) to stay in Macedonia for a while. However, I decided to go to Kosovo that day. I took the bus to the capital, Pristina, where I spent my day walking around. The city is huge and quite busy. It has so many interesting places, especially related to the Kosovo conflict. “Liberation” memorials are everywhere, throughout both the city and the country itself. Talking to the hostel owners over a few local beers and hearing their perspective on the war as well as the post-conflict political situation, which they saw very negatively, was incredibly instructive.

The next day, I took a short bus trip to the monastery of Gracanica, a beautiful Orthodox church, whose frescoes were stunning. I then took the bus to Prizren, Kosovo’s second city. After loud and hectic Pristina, Prizren was a welcome change of pace. Situated around a river and with the mountains in the background, it’s a beautiful city. There are many, many mosques, which broadcast their chants throughout the city. With some people I met at the hostel I hiked up to the fortress overlooking the city, where we watched the sunset.

An Accidental Adventure in Peja

The day after, I intended to do a day trip to Peja, a smaller city in the mountains. This went a little differently than expected. I got there fine, but then for some reason had an impossible time finding my way around (I must admit I also don’t have the best sense of orientation). After a while, I ended up near the river and eventually found my way to the old square, which reminded me a lot of Switzerland with the mountains in the background. I walked to a UNESCO-protected Patriarchate of Peç (the Serbian name of Peja), another monastery with beautiful frescoes. I also caught a glimpse of the beginning of the Rugova gorge, which I wish I had had the time to visit.

Then, the adventure started! To make a long story short, I missed the last bus going back to the city and had to spend the night in Peja, which turned out to be one of the most enjoyable nights of my entire trip. I went to the only hostel in town and asked if they had any free beds. Turned out they had opened just that day, and I ended up speaking with the two owners for hours, drinking raika (a local liquor), and enjoying their company. 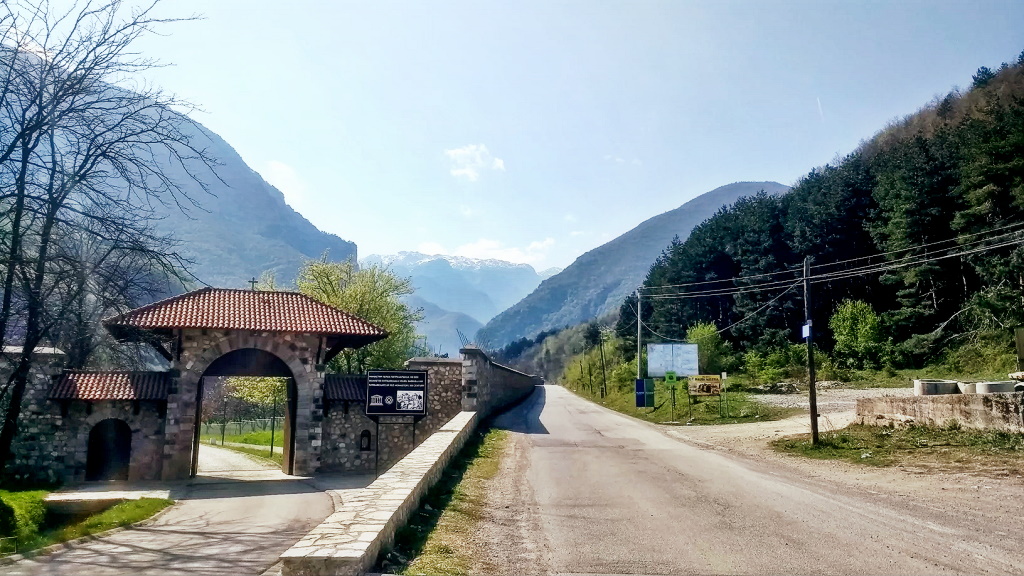 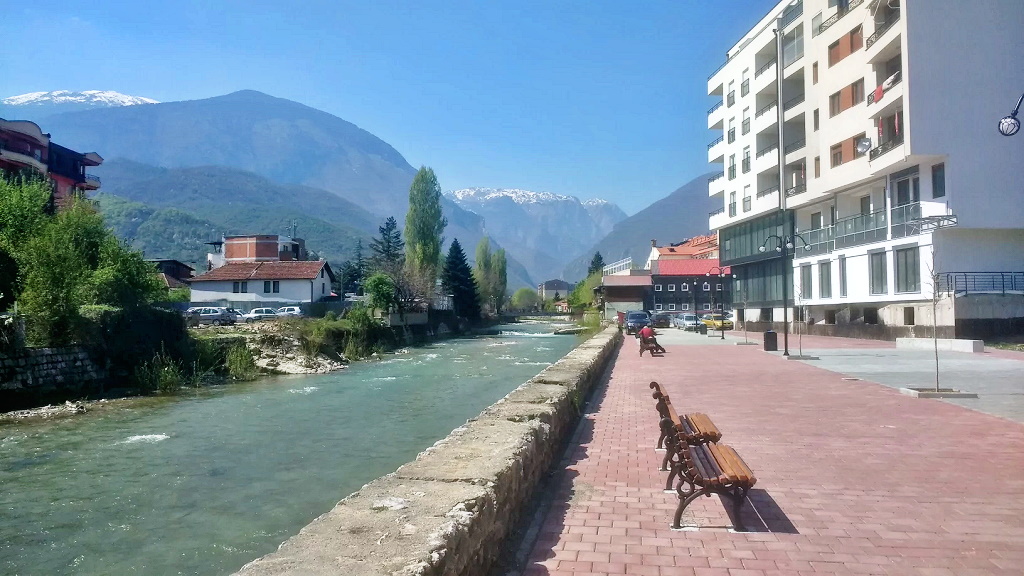 I was reluctant to leave the next day, but had slept in my clothes and was quite ready to change my socks, to tell the truth. After a quick visit to the local cemetery, flanked by the mountains, where I was persistently followed by a stray dog, I took the bus home. Some locals and I attempted communication, which ended up in a lot of laughs. My afternoon and evening in Prizren were spent relaxing and drinking strong coffee, though the city was buzzing with tourists from Albania and as far as Turkey.

I missed the last bus going back to the city and had to spend the night in Peja, which turned out to be one of the most enjoyable nights of my entire trip

The next day I headed to Ohrid, a lake town in Macedonia. After a long bus ride, I ended up in an amazing hostel run by Filip and his mother with an even more amazingly fluffy cat, Luna. After grabbing some quick food, it turned out to be a great night with great people, drinking raika, my imported Kosovan white wine, and beer. Even though Macedonia prohibits the sale of beer after 7PM in the low season, the rule tends to be: where there’s a will, there’s a way. The morning after, fueled by a great breakfast, we headed off on a drive around the lake. We stopped at a few churches and at a restaurant across the Albanian border. After driving all around the beautiful lake, which is fed by spring water, a group of us explored Ohrid town on foot. 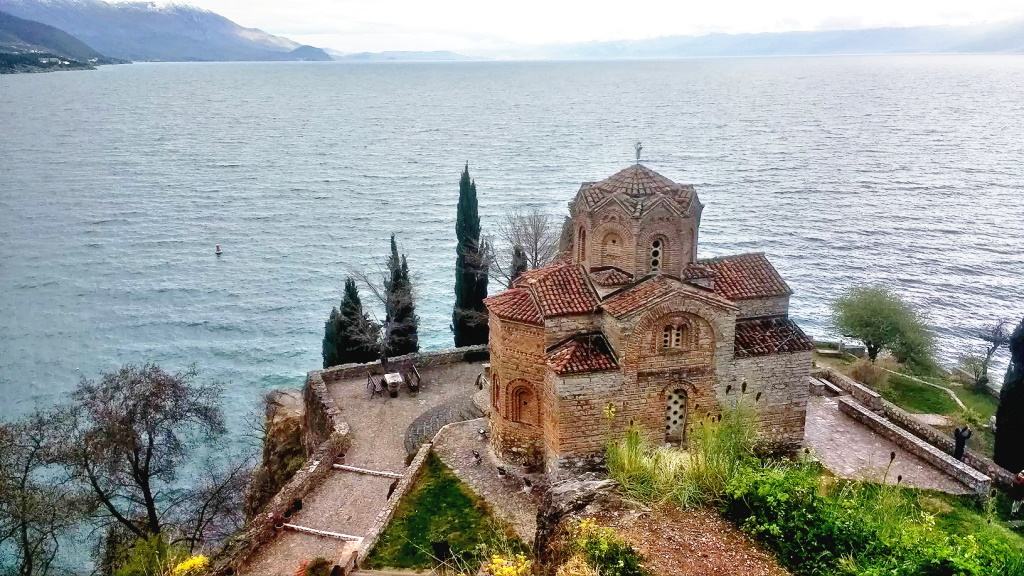 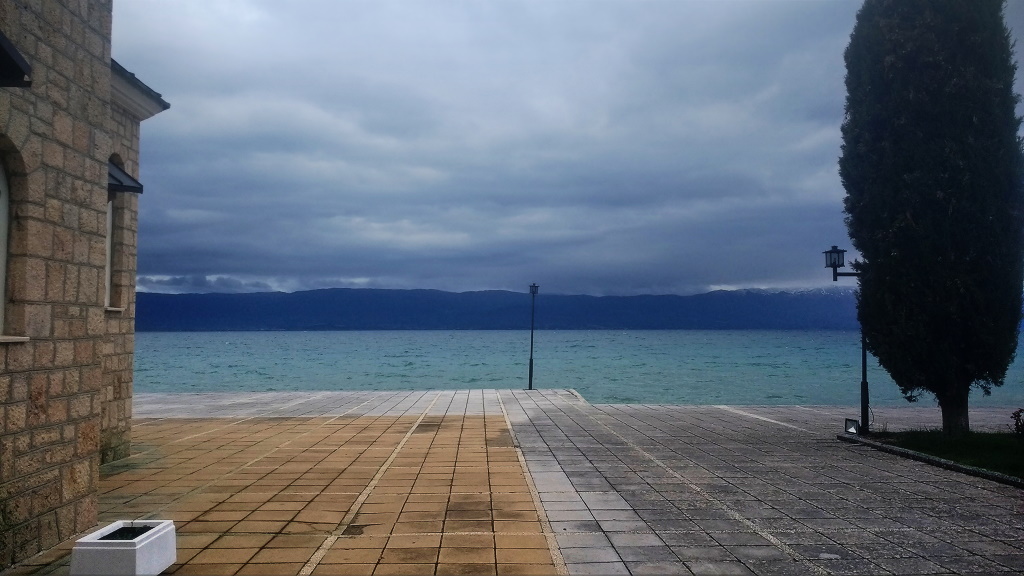 My last full day was spent travelling back to Skopje. I walked through the city, enjoyed some nice coffee and a great dinner with some people I met in the hostel. The next day, I was very reluctant to fly back home. I regret not having more time to spend there, and especially to explore more of the Balkan countries.

+  Day Trip to the Amsterdam Forest: 6 Wonderful Things to Do

A pause to think

Talking to people in Kosovo and Macedonia, who were nice and friendly everywhere, inviting me to coffees, sharing their bus fare, trying to make conversation when we didn’t speak the same language, made me appreciate these countries and their people all the more. Particularly as a Kosovan citizen, whose country is recognized only by a handful of states, freedom of travel is extremely restricted. Obtaining visas is strenuously difficult and linked with utmost financial effort.

(Economic) perspectives are certainly less than ideal, especially compared to a privileged position of any Western European traveler. I believe that if a person from Macedonia or Kosovo had booked a flight to a country they knew next to nothing about a week in advance, without bothering to speak the language or know anything more about the country they were visiting, they would have been received very differently here. Coming to Germany without knowing even a little German, there would have been a lot more aggression directed towards them than anything I experienced in their countries. I think that should give many of us pause to think.

One of the best weeks of my life

In Macedonia, economic (let alone political) perspectives seemed to be troubling for most people I talked to as well. I can only express my gratefulness and appreciation for those I met who, after sharing their problems and worries, kept smiling and at least for me, helped this be one of the best weeks of my life. I can only warmly recommend a trip here to everyone, and personally can’t wait to go back. For me, this is what travelling should be: seeing the world, experiencing beautiful places, learning to question your identity as well as the foundations of what your life is built on, all while checking your privilege and getting closer to realizing what is important.

I can only express my gratefulness and appreciation for those I met who, after sharing their problems and worries, kept smiling and at least for me, helped this be one of the best weeks of my life.

To round up, I’d really like to emphasize two hostels I stayed at that made my trip memorable. In Peja, that was Hostel Sarac and in Ohrid, it was Hostel Agartha. Remember if you book with the hostels directly, you’ll save yourself the Hostelworld commission fee.