Out of all Dutch cities, there is one thing that Amsterdam does best: it looks like it came straight out of a freaking fairytale, especially in winter. All the twinkling Christmas lights add an extra enchanting dimension to the cold winter nights. December has officially arrived, so I feel like it’s time for an appreciation post of the Christmas season. I grabbed my camera and found the prettiest places in the city centre. Here are 10 photos of pure winter magic in Amsterdam. 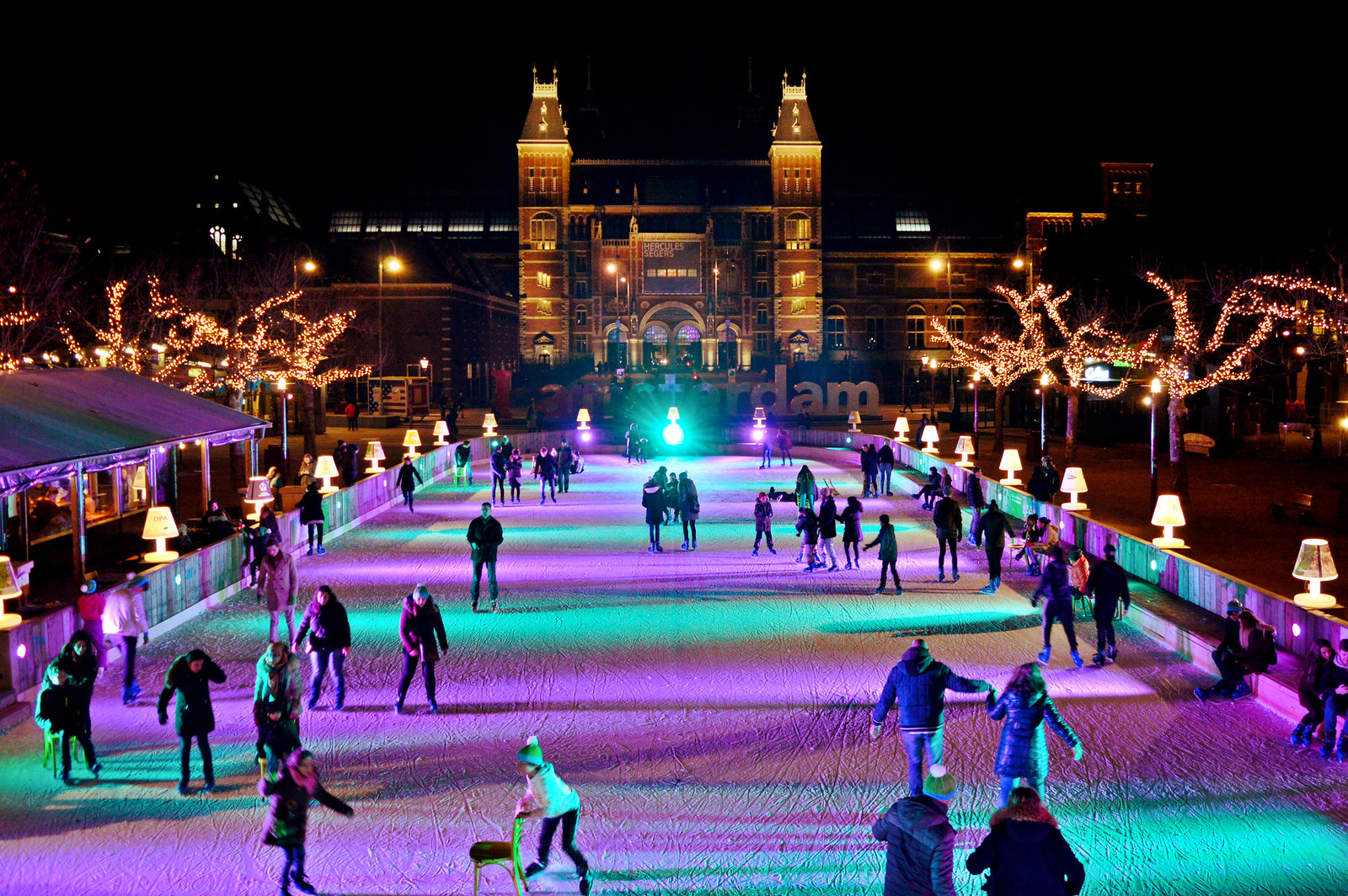 The Dutch winters used to be much colder and Amsterdam would be covered in a pristine layer of snow. Nowadays, the canals usually don’t freeze over anymore, but you can still go ice skating and drink some hot chocolate. Your best option would be the amazing ice skating rink at Museumplein, right in front of the iconic Rijksmuseum. 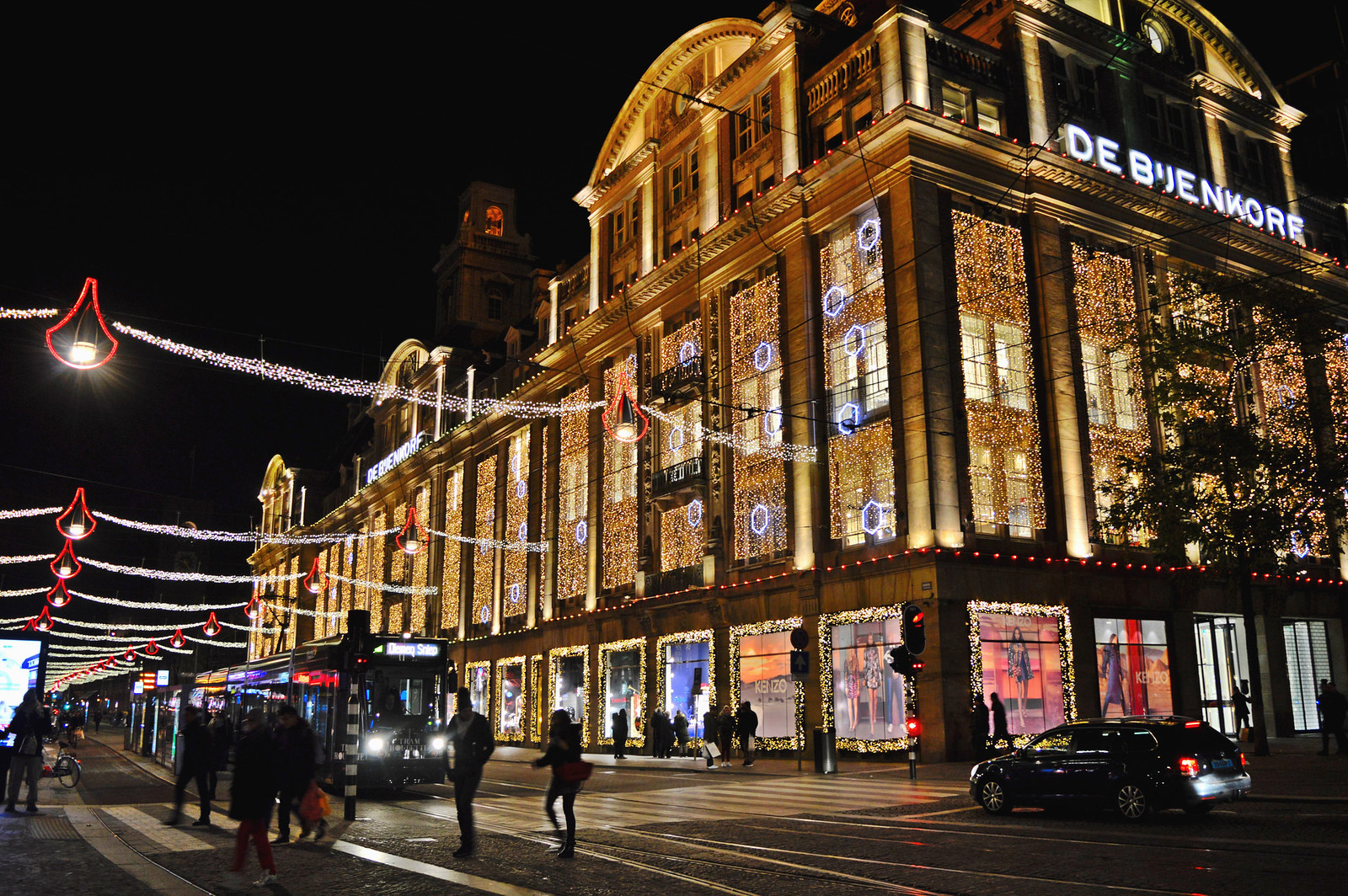 Like Paris has Lafayette and London has Harrods, Amsterdam has the Bijenkorf (Beehive). This luxury department store on Dam Square is known for its abundant Christmas lights and creative window displays. On top of that, Bijenkorf hosts an annual “Turn on the Lights” event to celebrate the start of the Christmas season, complete with musical performances and fireworks. 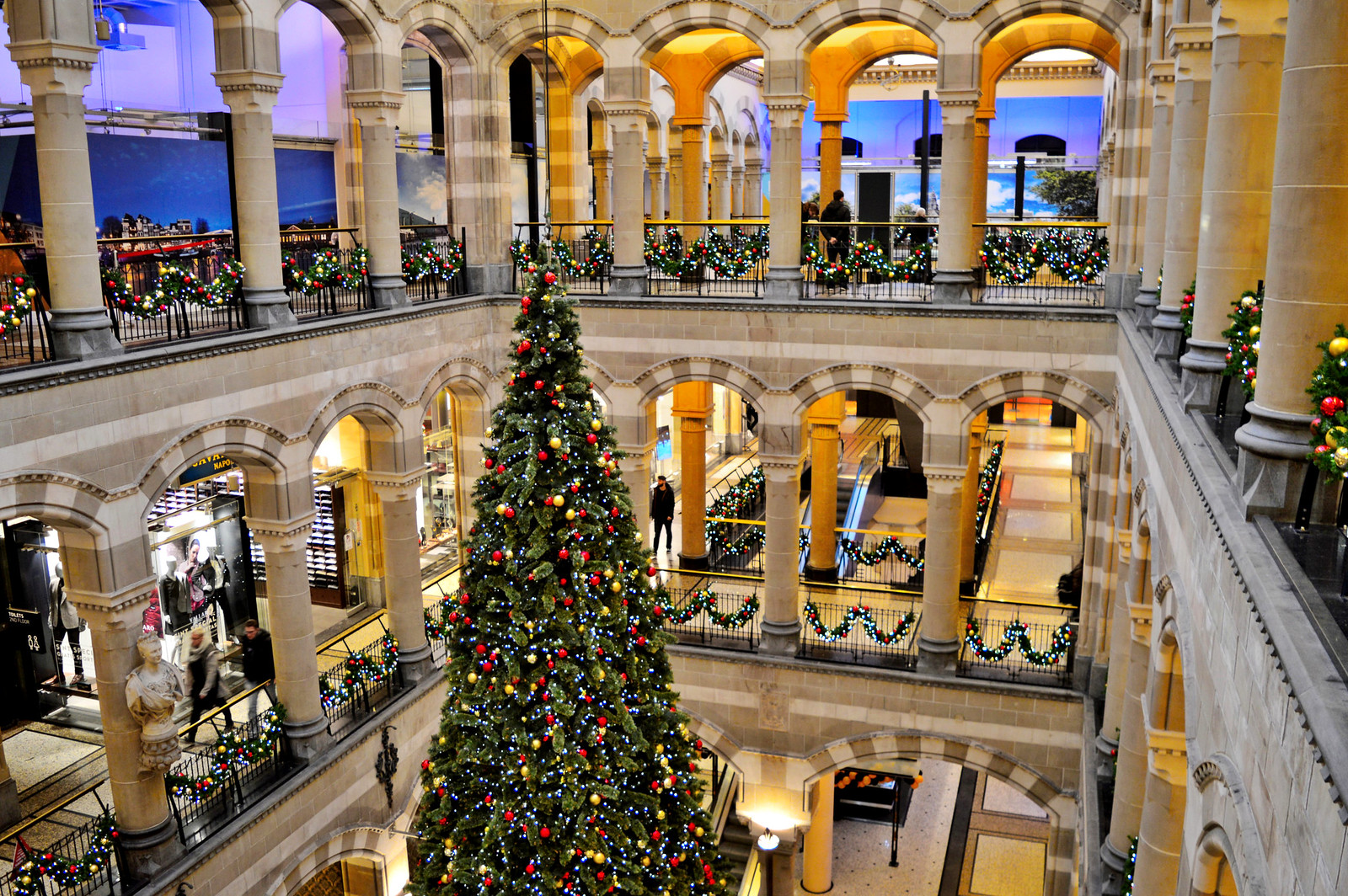 The Magna Plaza shopping mall used to be the main post office until 1987. It is one of the most incredible historical buildings in Amsterdam and part of the Top 100 Dutch heritage sites. Its exterior and interior are both equally impressive and the great hall is one of Amsterdam’s most beautifully decorated places (especially in December). 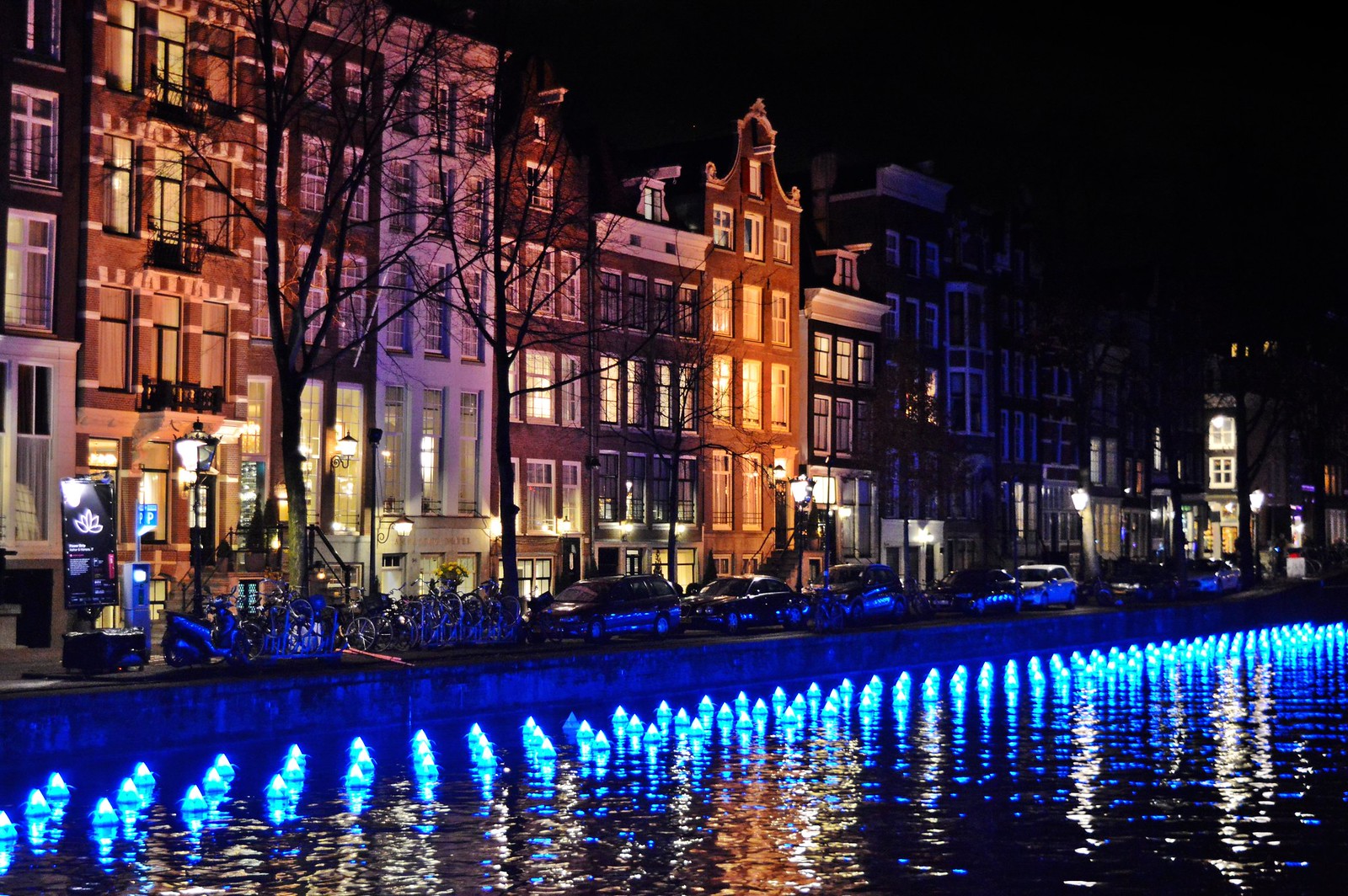 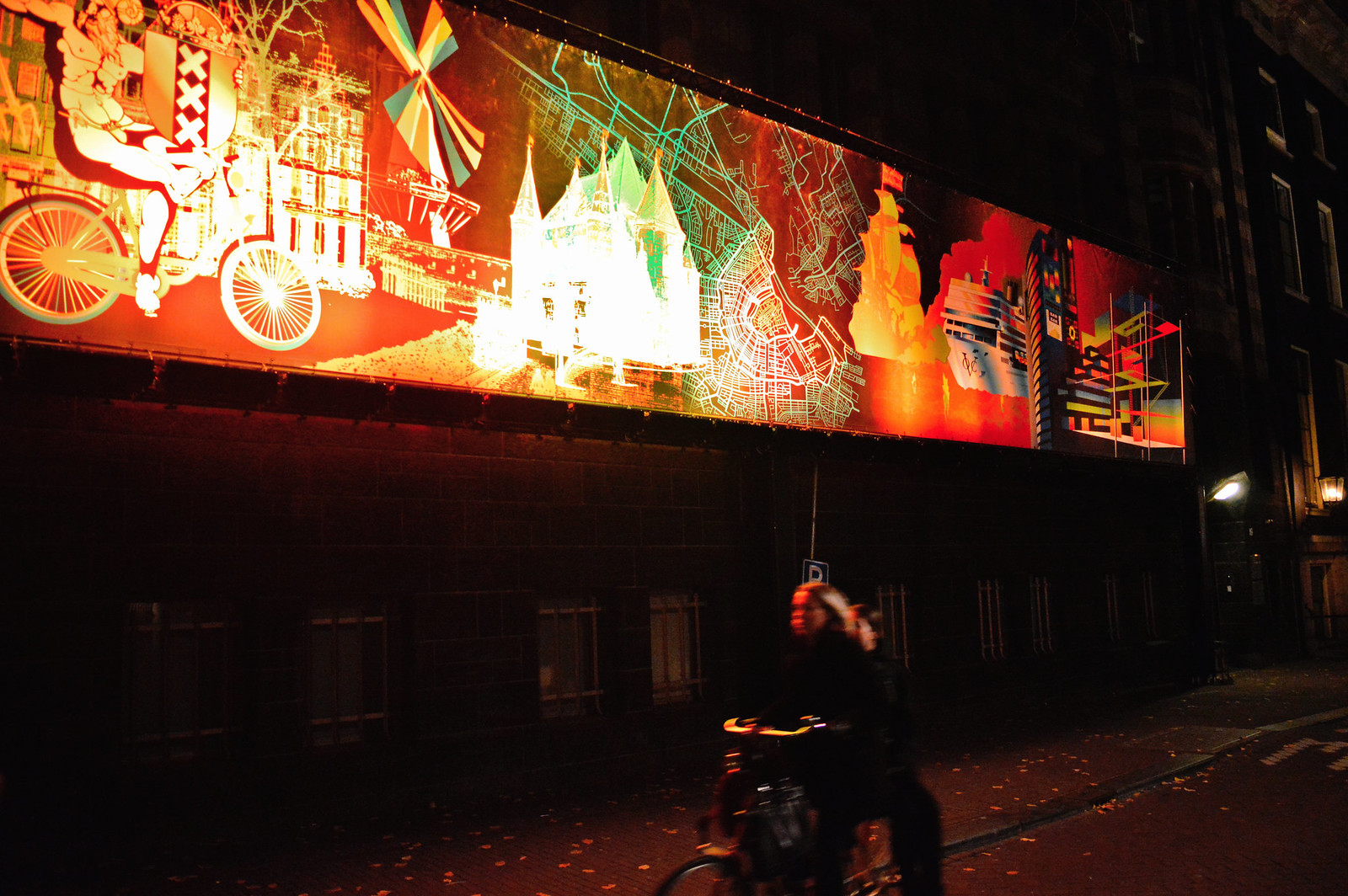 My favourite annual event in Amsterdam is, without a doubt, the Amsterdam Light Festival. As the days shorten and temperatures drop, the gloomy nights become illuminated by the most wonderful light installations from numerous international artists. This year’s edition opened on December 1 and will last until January 22. You can explore the festival by going on the Water Colors boat route or Illuminade walking route. The walking route opens a bit later on December 15 and ends slightly earlier on January 8. Of course, if you’re on a tight budget, you don’t neccesarily need to buy tickets to go on a tour. You can also go and see the artworks by foot or bicycle on your own accord.

+  Portraits from Tuscany: Discovering the Region Through its People 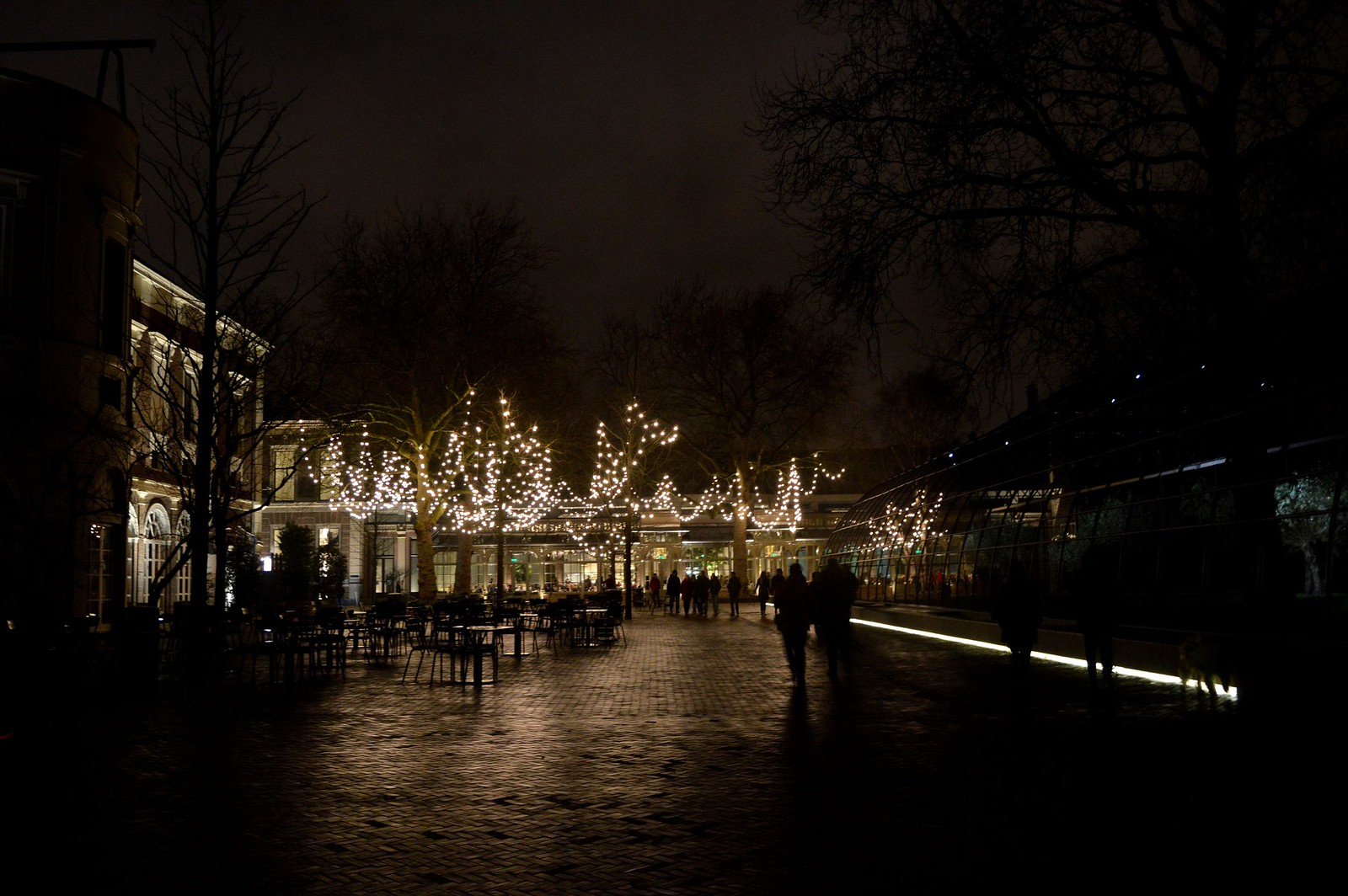 The Artis Zoo or Natura Artis Magistra opened in 1851 and is still the oldest zoo in the Netherlands. Artis includes a planetarium, aquarium, libarary and numerous historical buildings. The Artisplein or Artis Square (pictured) is freely accessible and offers a view of the zoo’s flamingos. 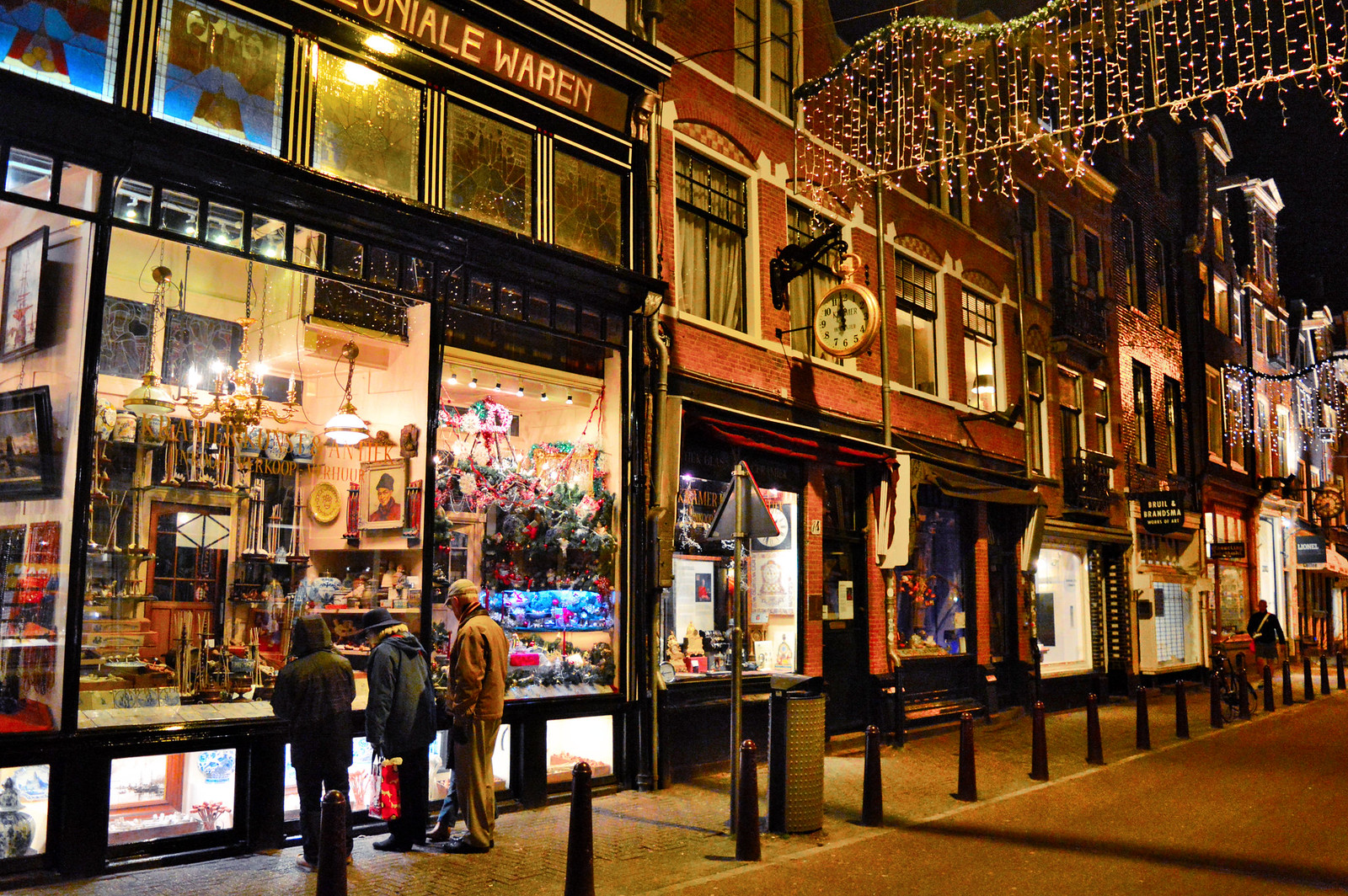 The Nieuwe Spiegelstraat (New Mirror Street) is one of Amsterdam’s lesser known gems. The historic street offers an array of peculiar antique shops, art galleries, and boutiques. Accordingly, the Nieuwe Spiegelstraat is lined with lit-up store windows that are filled with curious objects. This makes an evening stroll in December all the more enjoyable. 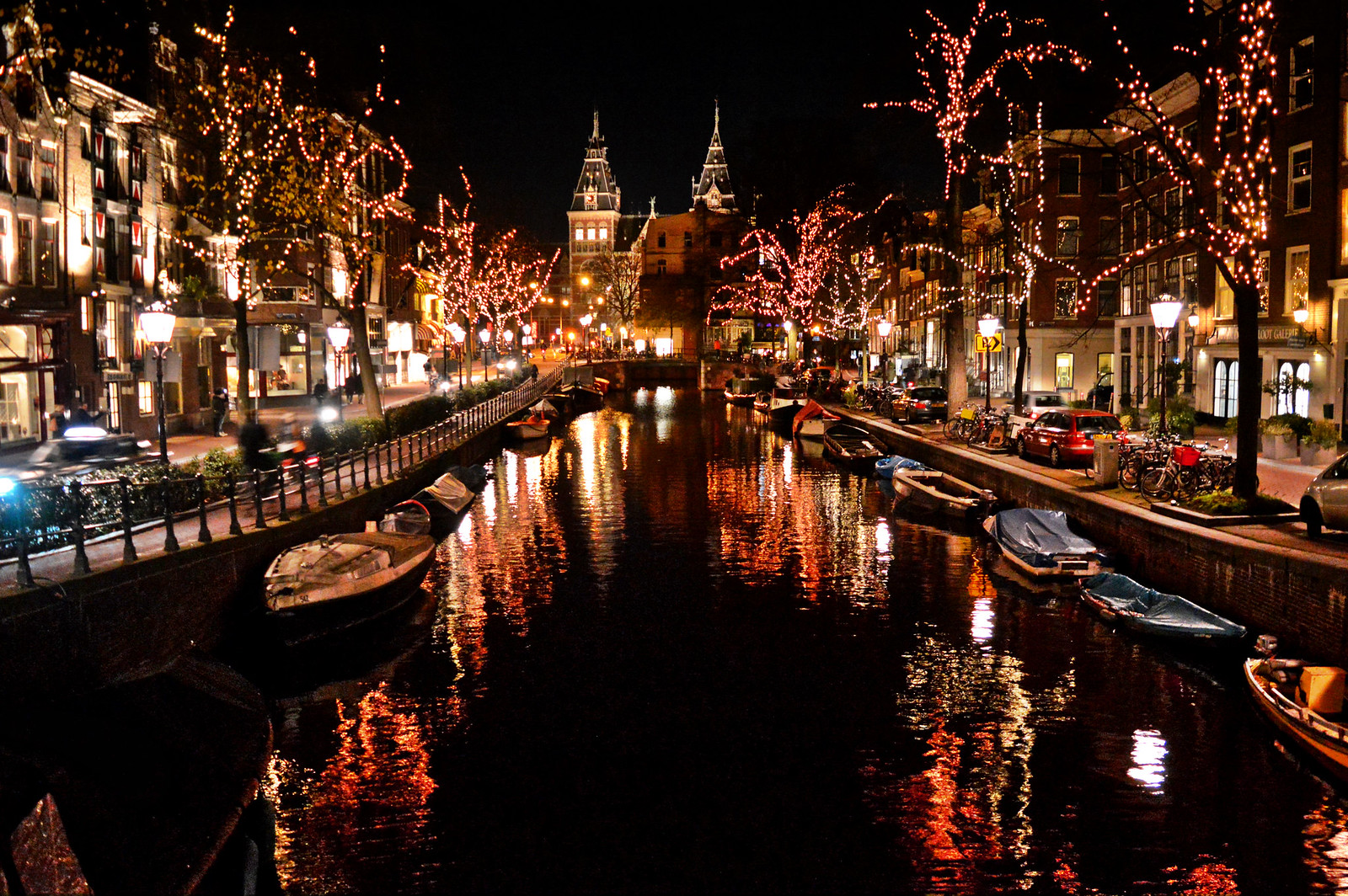 Christmas in Amsterdam makes the canals shine even brighter than they normally do. The Spiegelgracht (Mirror Canal) is part of the Amsterdam Canal District. The district has been part of the the UNESCO World Heritage list since 2010. The 17th-century canal lies opposite the Rijksmuseum and connects to the Nieuwe Spiegelstraat. 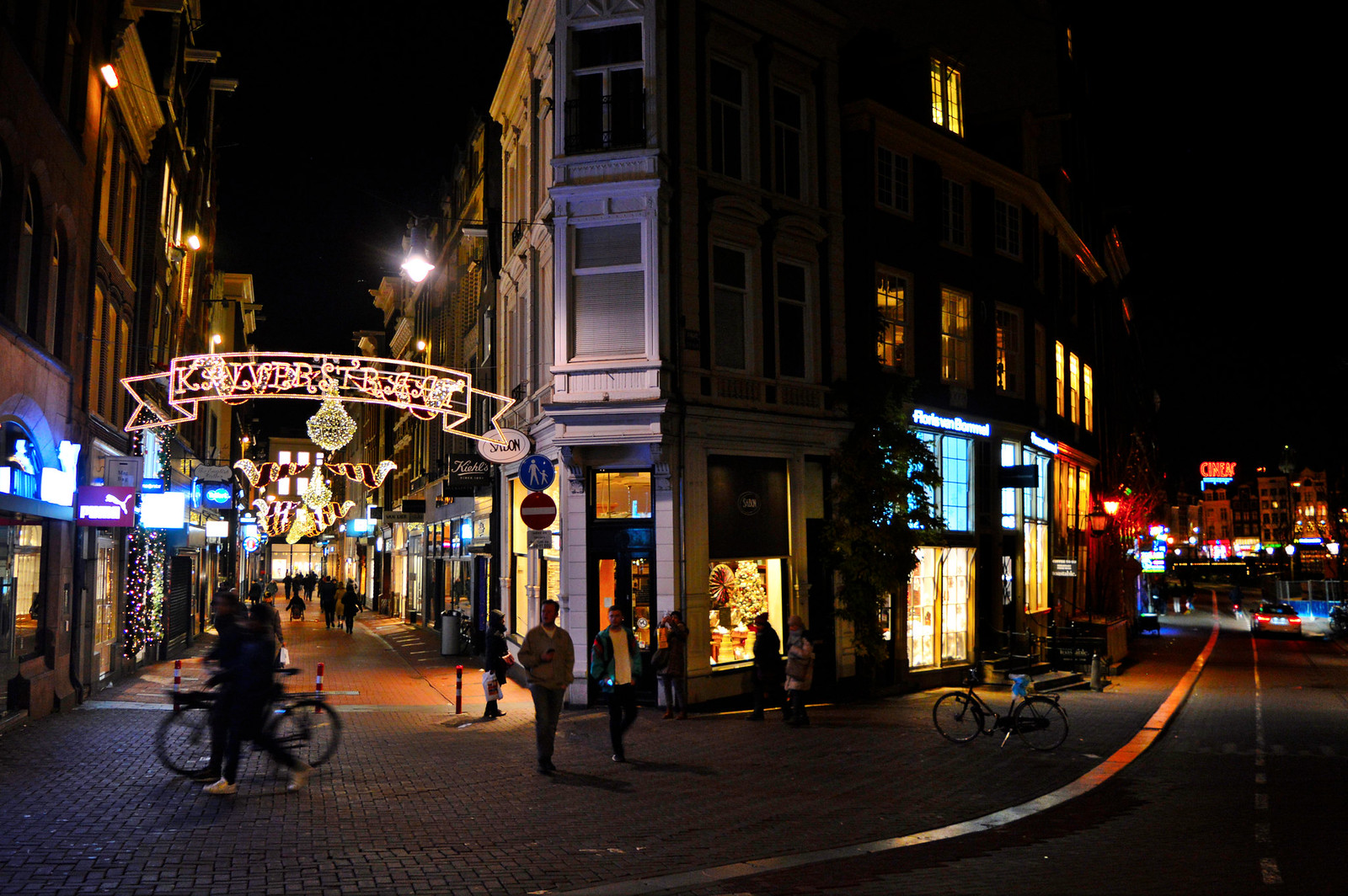 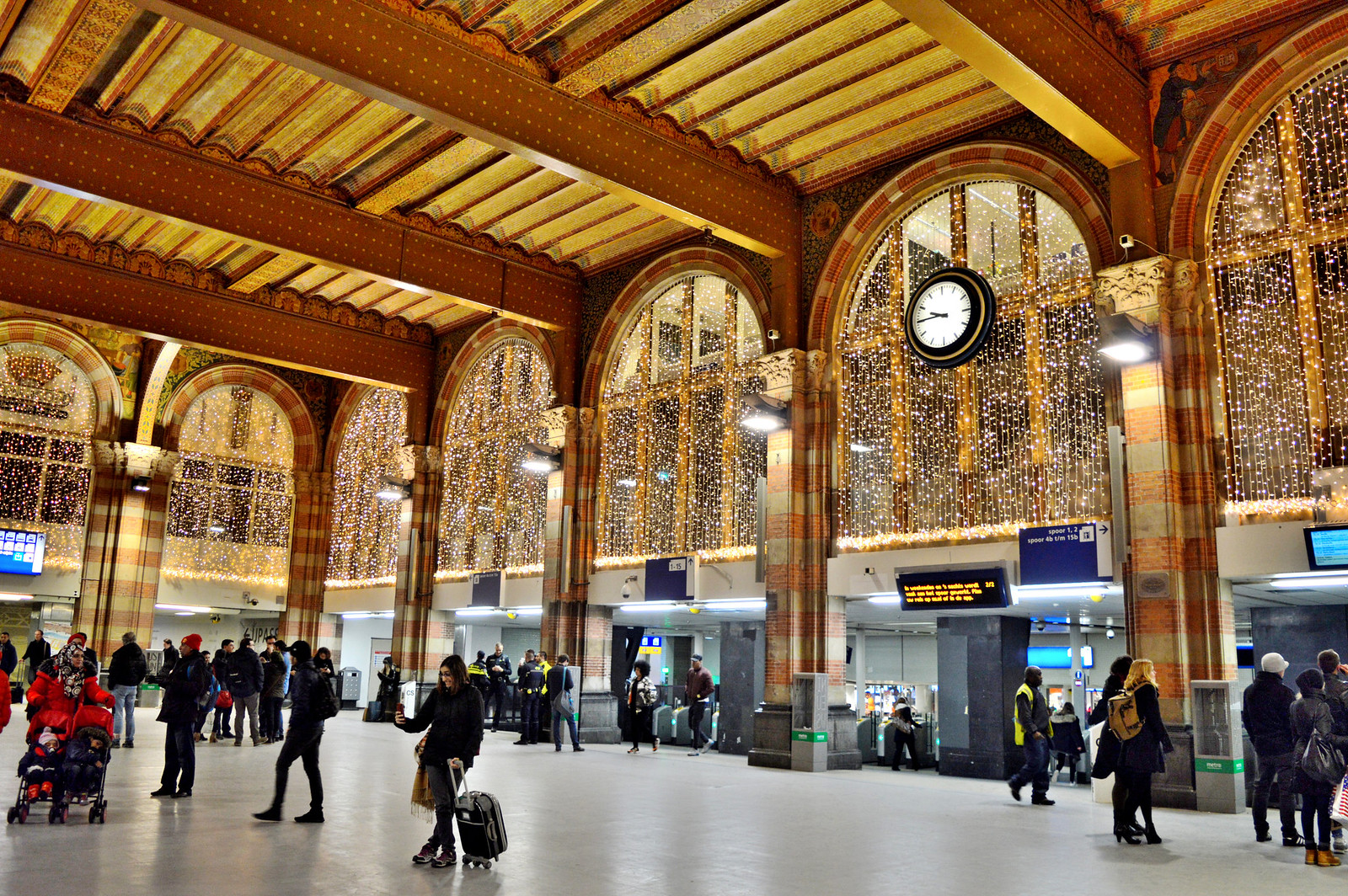 The city’s central station is another one of Amsterdam’s grand historical buildings and heritage sites. The building opened in 1889 and the station’s designer was Pierre Cuypers, the same man who designed the Rijksmuseum. Inside the main hall is also a piano that anyone is allowed to play. Most of the time, you can enjoy a free concert on your way to the train tracks.