When you think of Athens, what image comes to mind? I’m betting it’s the iconic Acropolis, one of the most celebrated emblems of Western civilisation and European culture. It’s a pretty sight, but as you may have guessed: there’s more to the monument than its current role as a touristy highlight. I recently visited Athens and asked myself: how much do I actually know about this centuries-old monument?

I went on one of my internet deep dives, and some of the stuff I found was quite unexpected…and highly political, even today. Considering how long the Acropolis has served as a cultural symbol, what I learned must only be the tip of the iceberg. But hey, it’s a good start! Check out these 5 facts about the Acropolis and get to know a little bit more about this Greek masterpiece.

5 Facts about the Acropolis 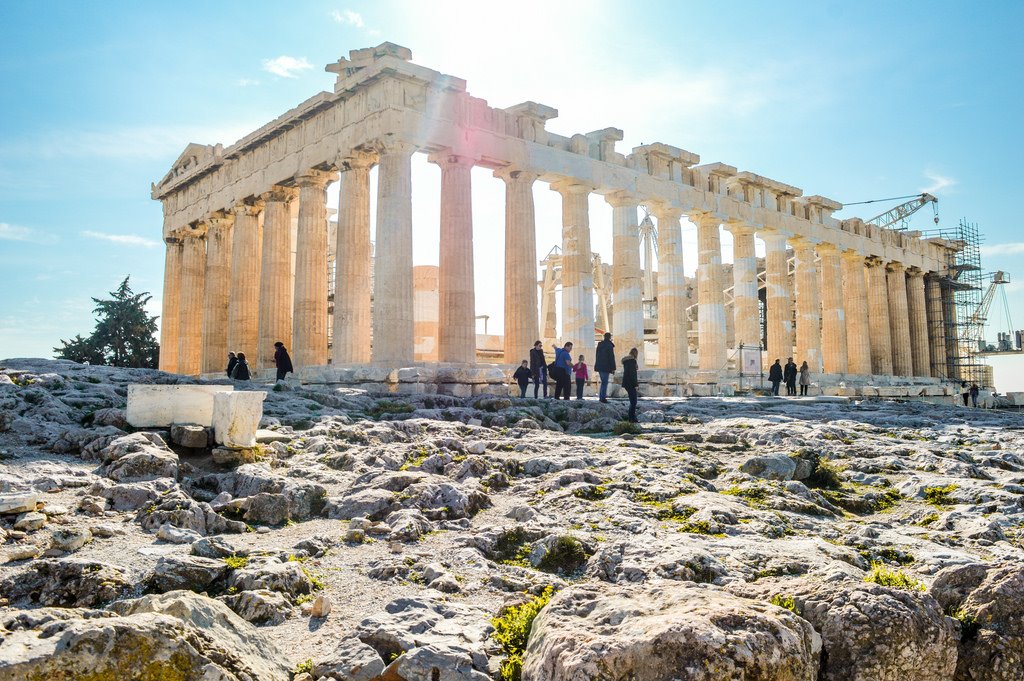 1. From Temple to Church, from Virgin Mary to a Harem

The Acropolis started its story as sacred grounds for the Goddess Athena, the primary deity for the city of Athens. Multiple temples graced the hilltop, but a strategic location like the Acropolis was never destined for a peaceful life. Somewhere in the 11th century, the Acropolis Parthenon converted into a Christian cathedral. Athena had to make way for Virgin Mary, and the Acropolis subsequently served as a church.

The Acropolis was never destined for a peaceful life, and Athena had to make way for Virgin Mary. A few centuries later, Mary herself had to give up her seat for the Turkish Commander’s harem.

That wasn’t the end of the monument’s religious transformations, however, since the Acropolis converted again and became a mosque in the 15th century. This is when the Ottoman Empire occupied Athens, and the Erechteion (one of the temples) functioned as the residence for the Turkish Commander’s harem. Passed back and forth between Byzantine, Frankish and Ottoman rule, the Acropolis remains as a historic meeting point of ancient and medieval civilizations. 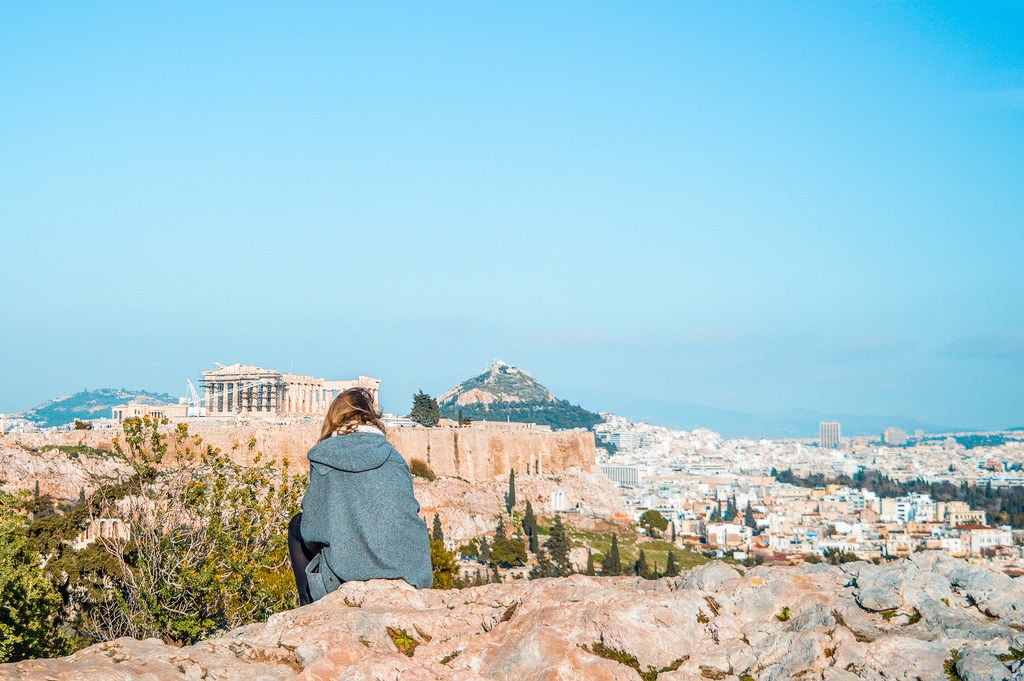 There is more to the Erechteion temple specifically, and it wasn’t just a random temple that later became a harem. Back in ancient time, there were several Caryatids or Korai (maiden) statues that used to support the roof of the Erechteion temple. The eastern part of the temple supposedly belonged to Athena’s sacred snake. The maidens and priestesses would feed the snake(s) that lived near the temple to see if they ate their gifts. If the snake didn’t eat the priestresses’ offerings, they interpreted that to be a very bad omen for the city.

+  An Honest City Guide for Kyiv

3. The Propylaea Gate Became a Prototype for European Cities

When you approach the top of the hill, you first have to pass through the Propylaea; the main gate of the Acropolis. The gate from 437 B.C. was a design by Mnesicles (a mysterious figure that nobody knows much about). It became such a prolific architectural feature that it many European cities adopted the style. Even in recent architectural history, the gate was a major inspiration. Well-known examples outside of Greece are the Brandenburg Gate in Berlin and the Munich city gate. 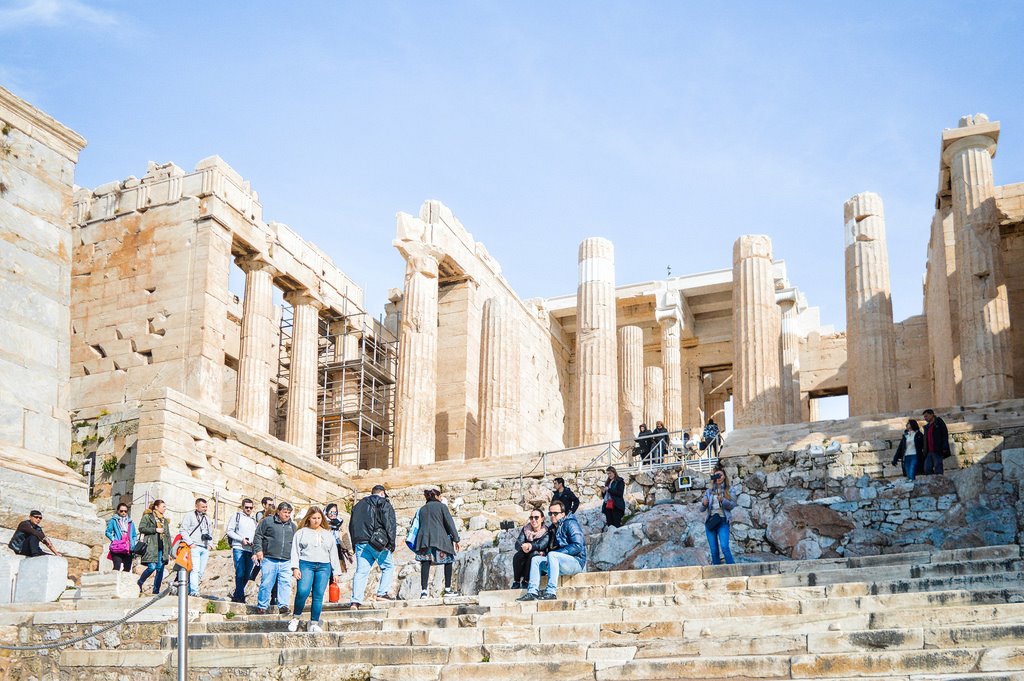 4. How a British Ambassador Snatched the Parthenon Marbles (and Never Gave them Back)

Now, the most controversial story that still hasn’t reached its (potentially happy) ending is the robbery of the Parthenon Marbles. Actually, not everybody thought it was a robbery. Lord Elgin, the ‘respectable’ British ambassador who snatched them, certainly didn’t. He decided to painstakingly remove several slabs of marble from the hilltop, put them on a ship, and sailed them home. In his mind, he was saving the pieces of art from the dangerous looting that was happening in the 19th century (though, technically speaking, he was basically looting the Acropolis himself). He then sold the marbles to the British Museum for 35,000 pounds, like a true archaeological ‘hero.’

Lord Elgin painstakingly removed several slabs of marbles to ‘save’ them, put them on a ship, and subsequently sold them to the British Museum for 35,000 pounds.

The Greeks weren’t pleased and considered it an act of barbarism. To this day, the British Museum refuses any returns to the Government of Greece. An exchange has been in the works since 1938, but to no avail. UNESCO even tried to mediate between Greece and the UK to resolve the diplomatic dispute in 2014. Unfortunately, the British Museum turned them down.

+  Tasty Tapas and Fun in the Sun: A Guide to Visiting Granada 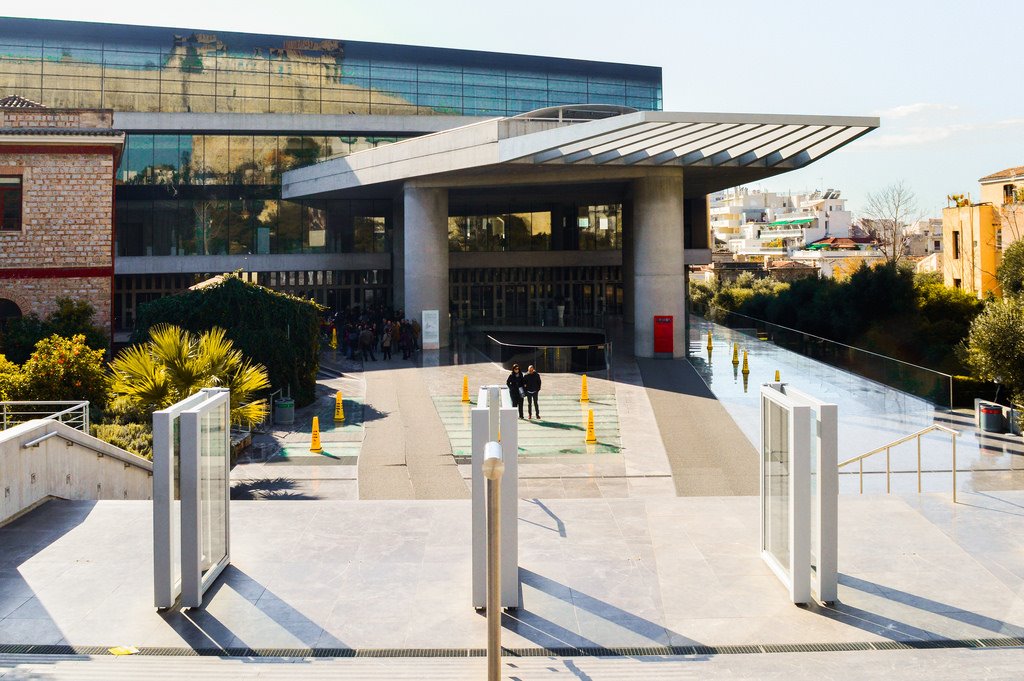 5. The Acropolis Museum Project was Insured for 400 Million Euros

Nowadays, a visit to the Acropolis is only an appetizer if you don’t have a look inside the Acropolis Museum down the hill. Almost all of the archaeological findings and artifacts from the Acropolis are now inside the new building. The museum opened in 2009, and the entire process of constructing the building and moving the artifacts took several years. While the cost of the transport was an estimated 1.6 million euros, the actual insurance of the project was a whopping 400 million euros.

The main reason for the move was the lack of space in the original museum on top of the hill. However, an additional push-factor for Athens to build a new museum was probably the fact that British officials declined to return the Parthenon Marbles to Greece. They suggested that Athens did not have suitable locations for them to displayed. The new Acropolis Museum would discredit that claim.