Today, I want to tell you the story about how my best friend and I accidentally experienced the curious Festa del Redentore in Venice. Almost exactly two years ago, I found myself in Venice on a sizzling day in the middle of July. Against our better judgement, we had chosen this iconic Italian city as our summer destination. We hadn’t prepared any trips at all, the last-minute tickets were so cheap, and which European city could ever beat Venice’s fairy tale beauty? When we finally got there, it was so warm, and we were struggling to evade the ridiculous crowds. At one point, we just escaped to a little park called Giardino della Marinaressa. We sat down in the grass to get away from it all.

Exhausted from walking around the whole day, both of us ended up taking (unintentional) naps in the grass. Suddenly, we were woken up by the voice of a stranger. It was the park’s caretaker, telling us that the he was about to close the gates. A little embarrassed, we quickly gathered our things and headed back in the direction of Piazza San Marco. 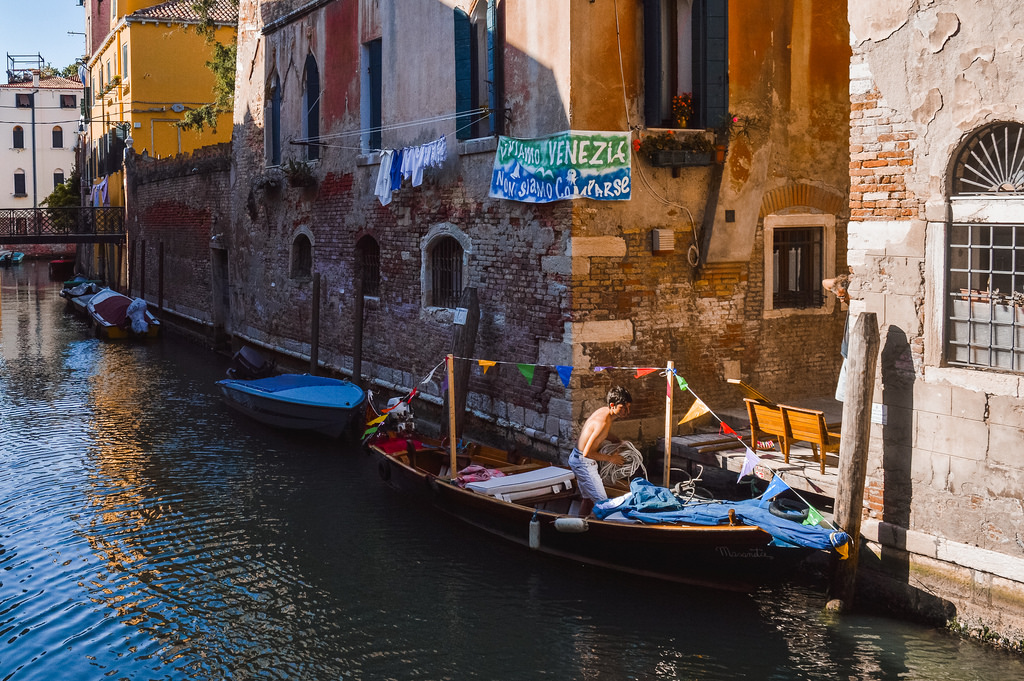 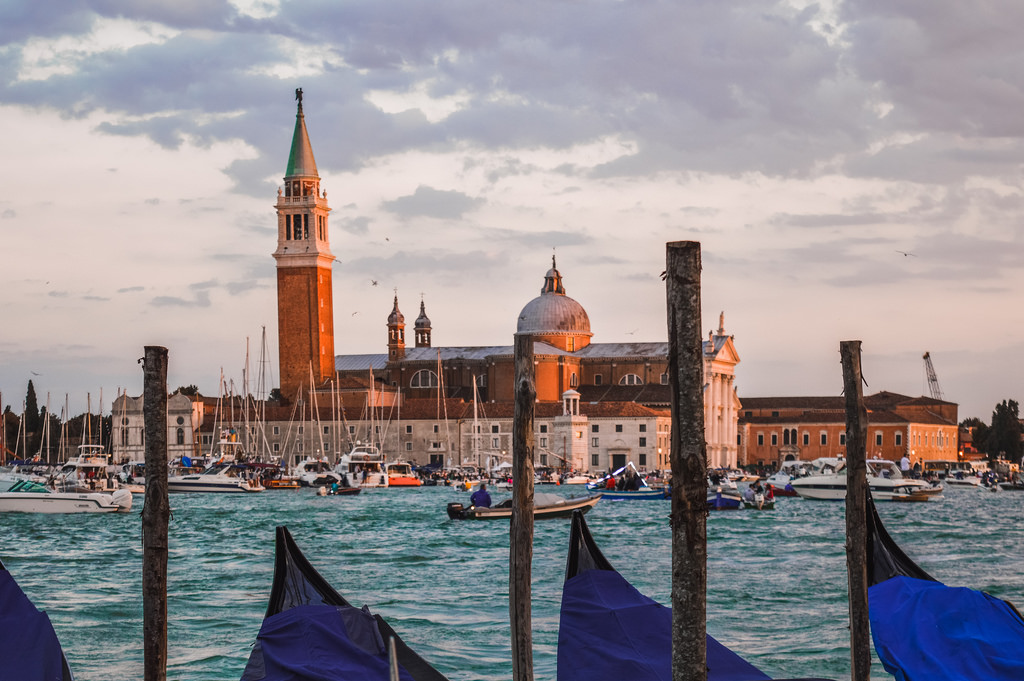 What on Earth Was Going On?

The sight of the sunset tones in the sky came as a small relief, since we could feel the temperature dropping and see the streets opening up a tiny bit. But as we kept walking around, on the look-out for a good pizza place, we started noticing a rather strange atmosphere in the city.

The locals were decorating their boats with flags and colourful lanterns. Everyone seemed excited, preparing to celebrate…something. We had no idea what was about to happen.

Instead of the crowds of tourists, we saw locals setting up dozens of tables on the public squares and decorating their little boats with flags and colourful lanterns. Everyone seemed excited, preparing to celebrate…something. We had no idea what was about to happen. I pulled out my phone and tried to connect to wifi, but to no avail. We ended up buying two takeaway pizzas and ate them on a little bench while waiting for the night to fall.

As the sky continued to darken, more and more people started to gather at the waterfront, around the San Marco Basin. We joined a crowd near the Punta della Dogana Art Museum and asked a few strangers if they knew what was going on. They were waiting for the fireworks, they said. It was the weekend of the Festa, and it was going to be amazing. Well, that was all we needed to know. We sat down next to them and patiently waited for the show to start.

+  4 Things to Do in the Eifel Region in Germany

When it finally did, we immediately understood the excitement. The San Marco Basin was filled with hundreds of decorated boats, floating on the dark blue water. Then, with a loud bang, the sky transformed into a spellbinding spectacle that lasted for almost an entire hour (!). 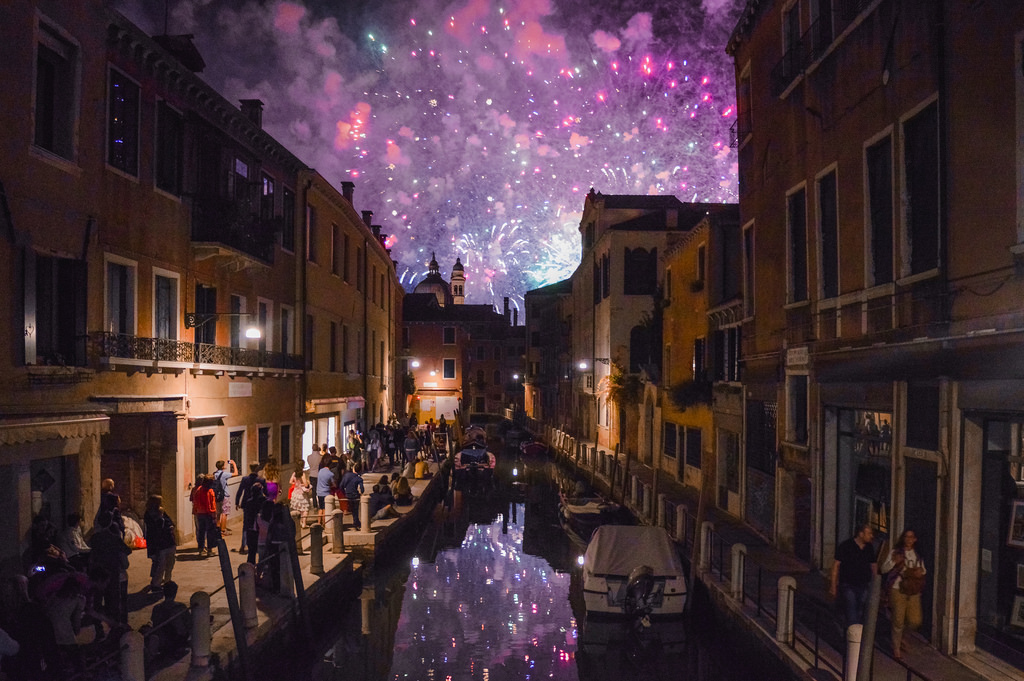 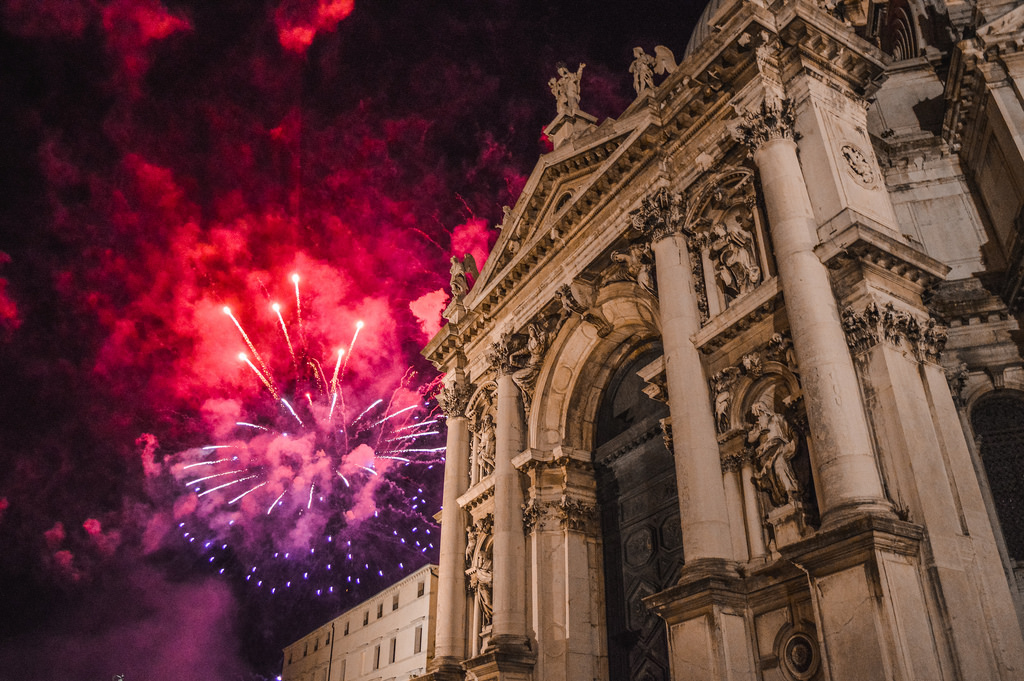 What is the Festa del Redentore in Venice?

The Festa those strangers were talking about turned out to be the infamous Festa del Redentore, or the Redeemer’s Feast. It is one of the most important traditions in the Veneto region, dating all the way back to 1577. The first festivities were organised to celebrate the end of a gruesome plague outbreak, which had started in 1575.

The bubonic plague, known as the Black Death in the 16th century, ended the lives of around 46 000 Venetians. This meant that about 25 to 30% of the population had perished within a measly two years.

The bubonic plague, known as the Black Death in the 16th century, ended the lives of around 46 000 Venetians. This meant that about 25 to 30% of the population had perished within a measly two years. Practically every person in Venice had lost at least one friend or family member.

During the outbreak, the Venetians quarantined Lazzaretto Vecchio, an island in the Venetian Lagoon. Lazzaretto Vecchio had a special hospital for plague victims, so most of the infected were sent to stay on the island. At one point during the outbreak, the death toll reached about 500 people perishing every single day. The monatti, the corpse carriers, had to work so hard that they could no longer keep up with all the burials. Men, women, and children from all layers of society, noble and poor, were eventually buried together in mass graves.

+  5 Things You Can Do to Really Experience Croatia 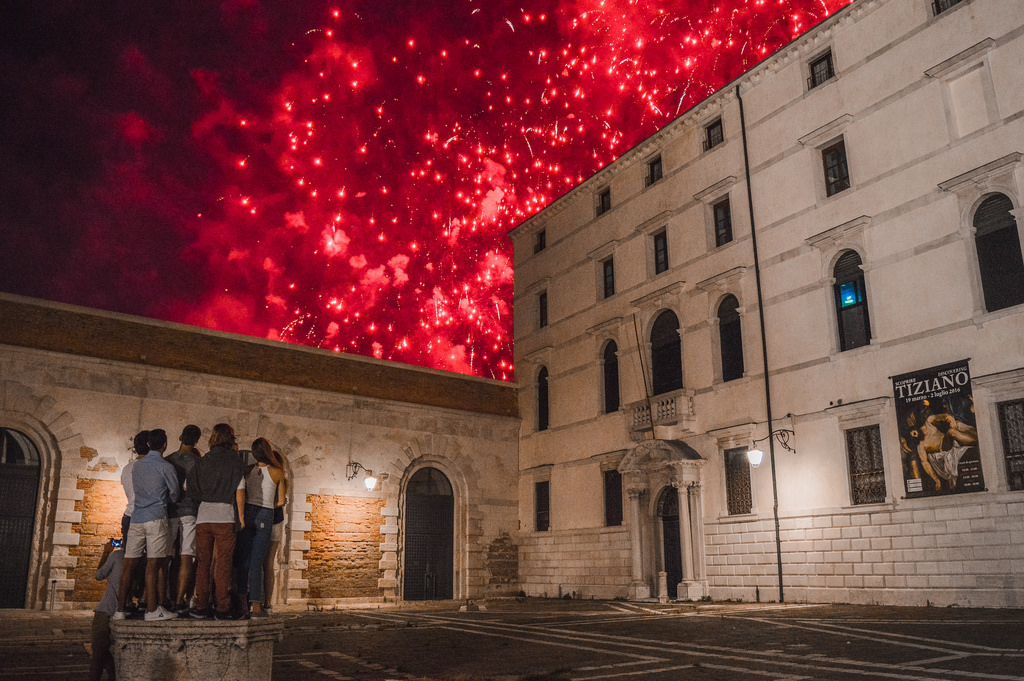 You can probably imagine the relief when the Venetians finally saw the plague slowly leaving the city. The Festa del Redentore thus became a tradition of thanksgiving to God (for ending the plague) and the Venetians even decided to build a dedicated church on Guidecca Island. It carries the same name as the festival: Il Redentore.

The Venetians never stopped celebrating the end of the outbreak. Every year, there is a Holy Mass, followed by boat parades and traditionional Venetian dinners shared by all. Then, as the cherry on top, everyone gathers at the waterfront to see one of the most eleborate firework shows in Europe at 10 o’clock on Saturday evening. Sunday is the final day of the festival, reserved for more religious celebrations. 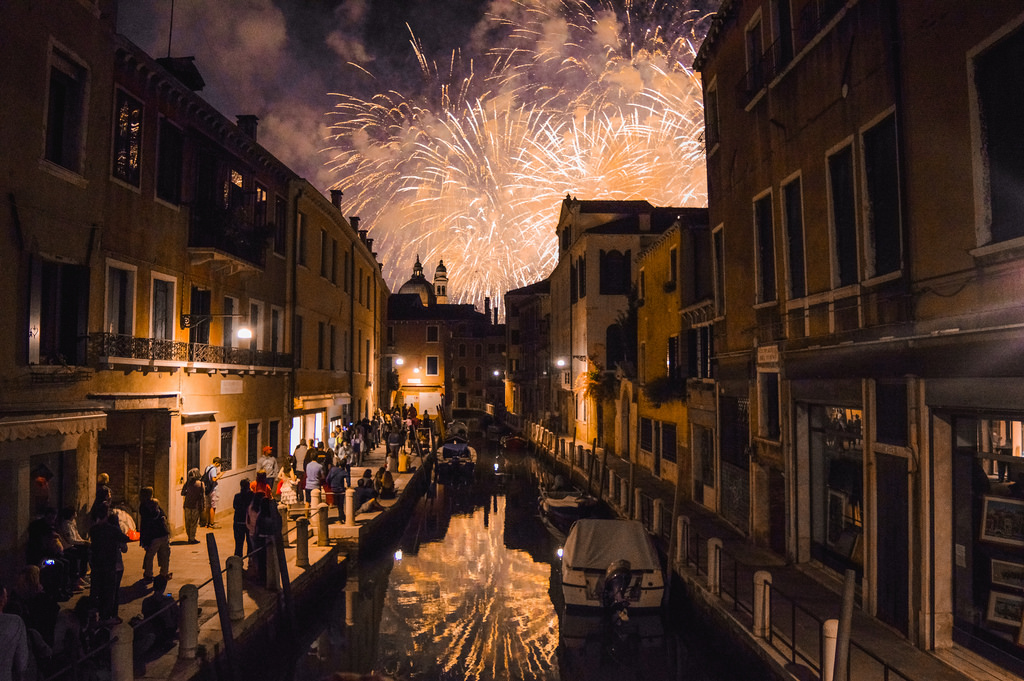 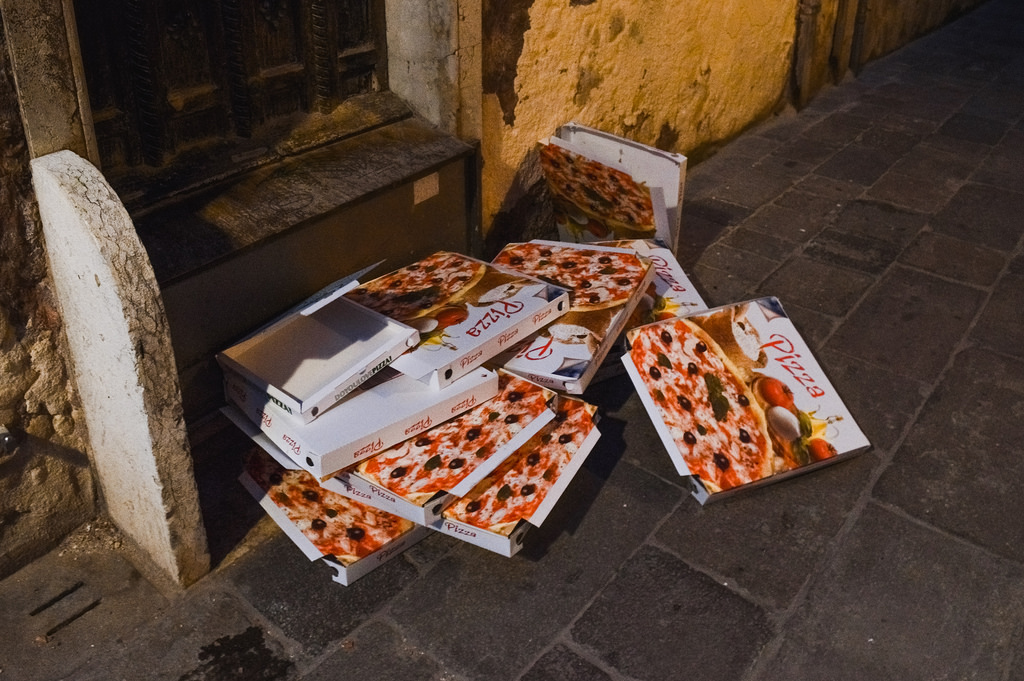 I heard that many young adults will keep celebrating after the fireworks are over. Some of them will gather at the beaches of Lido and stay up until the sun brings the faint glow of dawn. My friend and I decided it was probably a better idea to catch the bus and end the night early. We had another two days left in Venice, and we were already exhausted.

Nevertheless, I don’t think we will every see the day when we will regret visiting Venice in that insane summer month. Was it a relaxing vacation? Far from it, but who cares? Experiencing the Festa de Redentore of 2016 is still one of my most extraordinary travel memories, and I will never forget that first day in Venice.